The Gardiner's frog (Sooglossus gardineri), a species endemic to the forests of the Seychelles, hears with its mouth cavity, according to a study published in the Proceedings of the National Academy of Sciences. According to the study, the tiny frog has no middle ear region and it was initially thought that the frog wasn't able to amplify and sound waves from the inner ear to the brain. 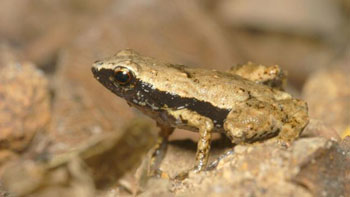 The study however turns the notion that the frog is deaf on its head. The scientists recorded the frog’s calls and played the calls back to wild frogs to determine how they behave. They found that the frogs were able to hear the recorded squeaks, which are very high pitched, with some even attacking the loudspeaker from which the squeaks were played.

To determine how the frog hears, the scientists employed x-ray imaging at the European Synchrotron Research Facility (ESRF) in Grenoble, France to look at the frog's anatomy in detail, where they were able to find out what part of the frog's body could play the role of the middle ear, which in other animals transmits sound waves to the brain via nerves. 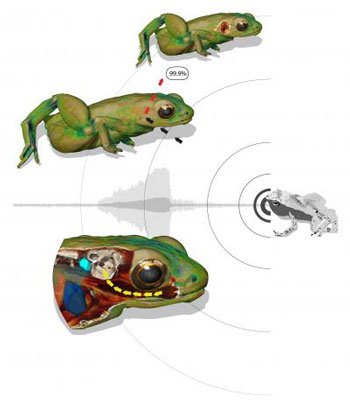 The scientists then produced simulations of the frog's head responding to sound waves that were of the same frequency of the call of the frog and confirmed that the mouth cavity of the frog amplified the sound like that of a guitar. This coupled with the frog's  thinner layer of tissue between the mouth cavity and inner ear enables the sound waves to be transmitted to the fluid in the frog's head and then to the brain via nerve cells. The scientists hope that their work can be further applied to help solve the issue of deafness in people in certain situations.

The Gardiner's frog is a terrestrial frog that eats mites, ants and amphipods and is one of the smallest frogs in the world at 0.4 inches. Native to five localities in the Seychelles, it is listed as on the IUCN Red List as a vulnerable species.

An abstract of the paper "How minute sooglossid frogs hear without a middle ear," can be found here.