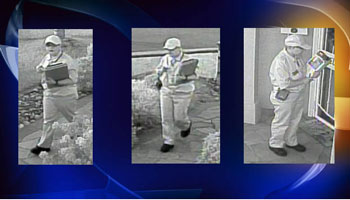 If you live in the San Francisco Bay area to Roseville, Calif., be aware that a woman is knocking on doors of houses claiming to work for animal services and is searching for venomous snakes. She is setting up unsuspecting homeowners to be burglarized.

According to media reports, the woman knocks on doors and persuades the resident to let her in the house to take measurements of the home and the backyard for a "snake barrier" that won't ever exist. While she gets the homeowner to help her measure the back yard, an accomplice or accomplices enter the home and burglarizes it.

The Fremont Police Department says the the woman is dressed in a tan or brown short sleeve shirt with a patch on the sleeve that says Bay Area Animal Control or City Animal Control, brown khakis, dark colored gloves, an ID on a lanyard, and a hat. The ruse has apparently been going on for several weeks, with several victims falling for the scam.

The suspect has been described as white or Hispanic, about 5 feet tall with a heavy build. She also has a pierced tongue. Her accomplices are Hispanic males about 35 to 40 years old. So far, residents in Union City, Belmont, Burlingame, San Mateo, Roseville, and Fremont have been victimized by the scam.

The Fremont Police Department says that the city's animal services division is not investigating any snake infestations and for residents to be wary of anyone who knocks on doors claiming to be an employee of the city. The police said residents should ask for a picture ID, and if they don't have one or feel something is not right, they should call the police.