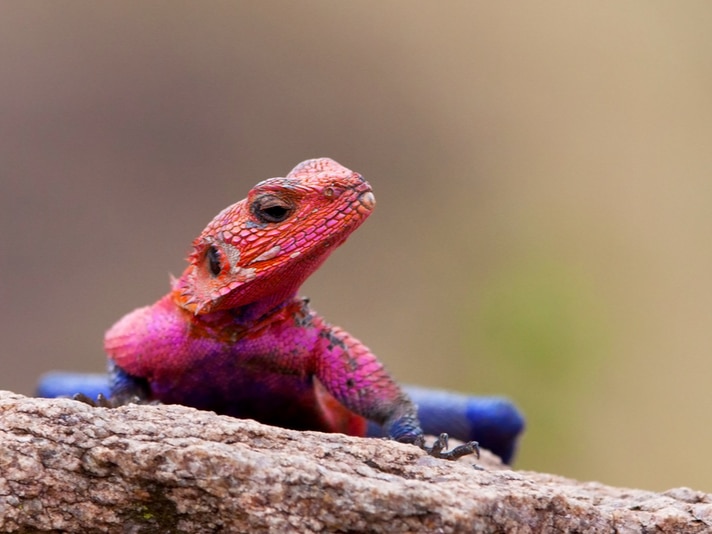 Florida is sometimes called ground zero for the number of invasive reptiles that now call the state home.

Florida is ranked number one worldwide for invasive species, which include many reptiles that range from small lizards to the very long Burmese python. These invasive reptile species are classified as both non-native and invasive, but there is a difference between those two labels. Non-native species are simply animals who are not from the wild environment they are living in. These are typically a few documented individuals. When a species is classified as invasive, it means that entire populations of that non-native animal are established, expanding, and self-sustaining. When invasive species are established in areas they don’t naturally belong in, they cause drastic damage to the ecosystem and the native animals in it. 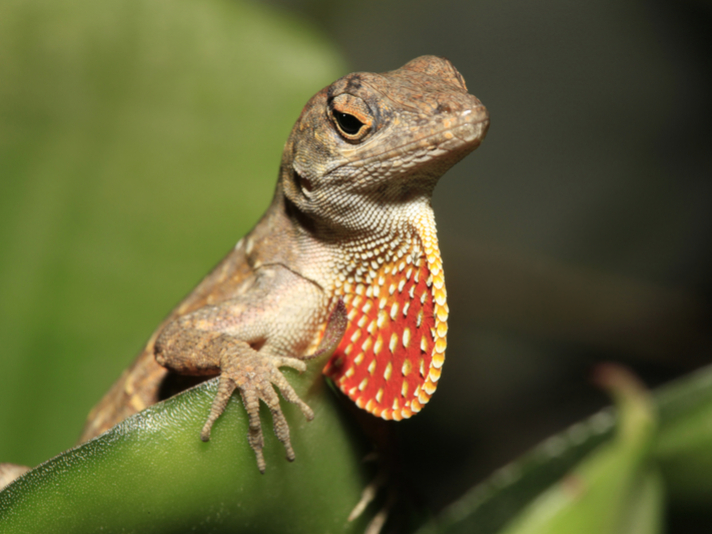 The Cuban brown anole is now distributed all throughout the state of Florida. It is even established in the Hawaiian islands.

Worldwide, invasive species are the second leading cause of extinction, so it is a huge problem to the ecosystems it is happening in. Native species can be endemic or indigenous; endemic meaning they are found only in a specific area or region, while indigenous means they can be found in multiple regions (including other countries, sometimes). These native species have evolved over time to belong in their special ecosystems, and that makes them worthy candidates for protection. Because they are so specifically adapted to their unique habitats, or niches, they are not able to deal with unnatural quick changes like invasive species.

Often, the invasive species has the advantage, outcompeting the native species for resources like food and shelter. Invasive species are unnatural because they are almost always caused by humans, which can include accidental or intentional release, or transport through commercial trades. Regardless of the reasoning, removal programs are now required to handle the intense damage that invasive species are causing. One of the worst results of invasive reptiles is that they are causing native reptile species to become threatened, endangered, or even extinct. Although these animals are just trying to survive, removal is a priority for reptile conservation.

Florida is hot, humid, and the perfect place for many invasive reptiles to thrive. These species, which would never naturally inhabit these areas, are quickly expanding their populations in Florida’s natural systems. This habitat has become a plethora of non-native invasive reptiles which has put intense pressure on the native reptile and also mammal populations. Many state regulated and private eradication programs are focused on the few invasive reptile species mentioned here. It isn’t the invasive species fault, but these beautiful invasive reptiles have a heavy trickle down effect on suburban, plant, and animal communities, making them a prioritized topic for reptile conservation. 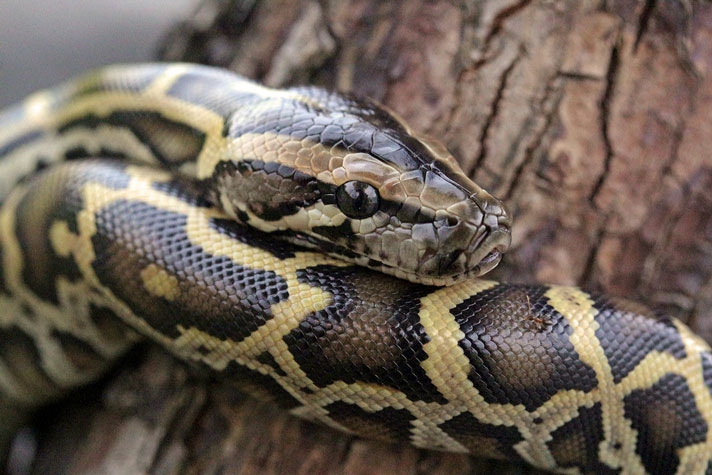 The Burmese python is well-established in the Florida Everglades.

It’s only right to name this iconic apex predator of the Everglades first. The Burmese python (Python molurus bivittatus) is native to Southeast asia and is a large constrictor. It has relatively no predators in the Florida Everglades, besides an occasional scuffle with alligators and crocodiles, where many times the Burmese python has been documented winning. The Burmese python is outcompeting all other native snake species and continues to impact the native mammal, reptile, and bird populations of the Everglades. During Hurricane Andrew in 1992, a Burmese python breeding facility was destroyed, releasing hundreds of these large pythons directly into the Everglades. Although some irresponsible pet owners may have also released these snakes, most can be directly connected to this natural disaster that destroyed the facility. These snakes are expanding and self-sustaining, and the Burmese python is now illegal to own without a FWC permit.

This innocent looking little lizard is now distributed all throughout the state of Florida. Some time ago, the Cuban brown anole (Anolis sagrei) hitched a ride on some cargo from Cuba. Now, they are well established as an invasive species. Much smaller than the Burmese python, there are still too many invasive anole species to mention, which are causing damage to Florida’s native green anole species. They eat the same type of food and live in the same type of habitat, now thriving in populations all over the state in much greater numbers than the native green anole. 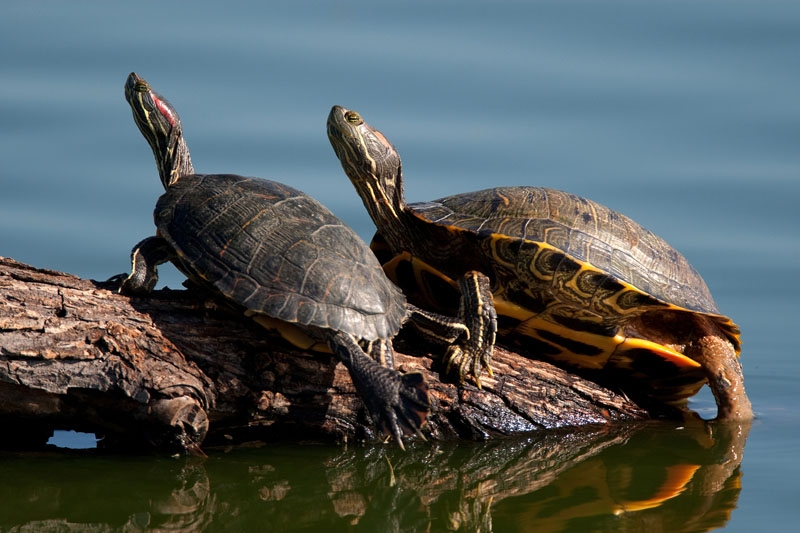 The red-eared slider is one of the most invasive species in the world.

Now established in almost every county and region of Florida, red-eared sliders (Trachemys scripta elegans) are a subspecies of slider introduced to Florida from Mississippi and South America. They are the most commonly exported aquatic turtle, which has made them an invasive species in many countries of the world. These large, carnivorous, aquatic turtles have established populations that are out competing the native freshwater turtle species of Florida, like the Florida red belly slider. They live in rivers, lakes, streams, and any freshwater habitat of Florida where they are able to hybridize with other freshwater turtles. They are distinct with red stripes on the side of their faces, and are able to live for many decades. They currently have been banned by the state of Florida for sale and possession, without proper permits and inspection to prevent escapes.

Tokay geckos (Gekko gecko) are large and loud lizards that are native to Southeast Asia, but now have self-sustaining and growing populations in Florida. Many people intentionally release them in suburban areas for pest control, since they eat common house pests like cockroaches. They live in arboreal areas like trees, an ideal location as they have sticky toepads that help them climb. They are also common in natural rock land habitats of Florida where they are an established invasive species, eating other arboreal creatures like frogs, birds, and have even been documented eating the native corn snakes. 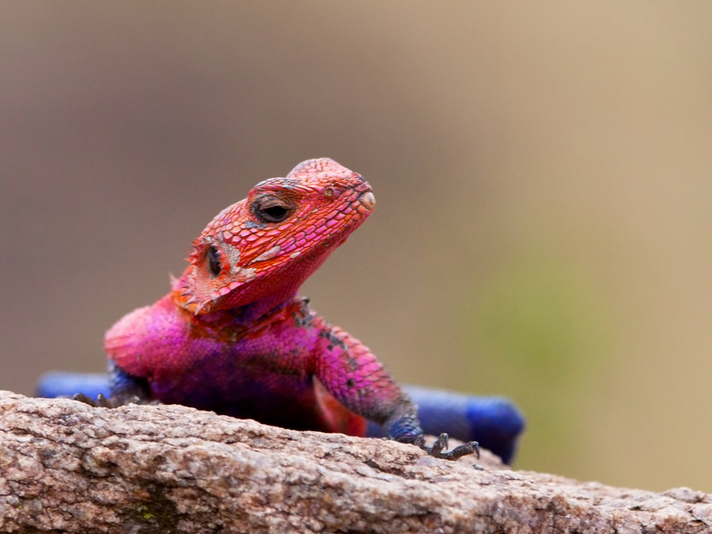 The red head agama (Agama agama) comes from Africa, and there are many subspecies which are currently established in Florida.

Personally speaking, the red head agama is one of the most beautiful invasives I see around southern Florida. They have strikingly bright orange-red heads and blue bodies. It is a shame they don’t belong here, but it’s a reality I must acknowledge as a conservationist! The red head agama (Agama agama) comes from Africa, and there are many subspecies which are currently established in Florida. Although research on this species in Florida’s natural habitats is limited, these medium sized, beautifully colored lizards are established and expanding, where they prey on smaller invertebrates including florida’s endemic and native lizard species. 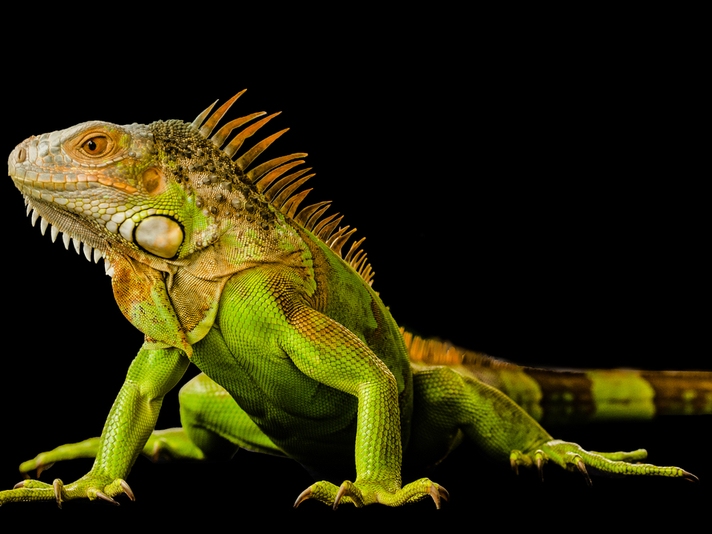 Care for the green iguana has improved over the decades since it was first introduced into the pet trade.

The green iguana (Iguana iguana), native to South America is found in massive numbers in the state of Florida. Having no natural predators, populations have exploded and continue to expand. This large herbivorous lizard causes extreme damage to natural ecosystems by eating almost every type of plant they can find. They have been documented consuming plants like the Florida nickerbean, which hosts the endangered Miami blue butterfly. They are found everywhere from natural habitats to suburban areas, where they have been documented eroding away infrastructure with their burrows. The green iguana is a prominent invasive with a heavy trickle down effect on communities of people, plants, and native/endemic animals. 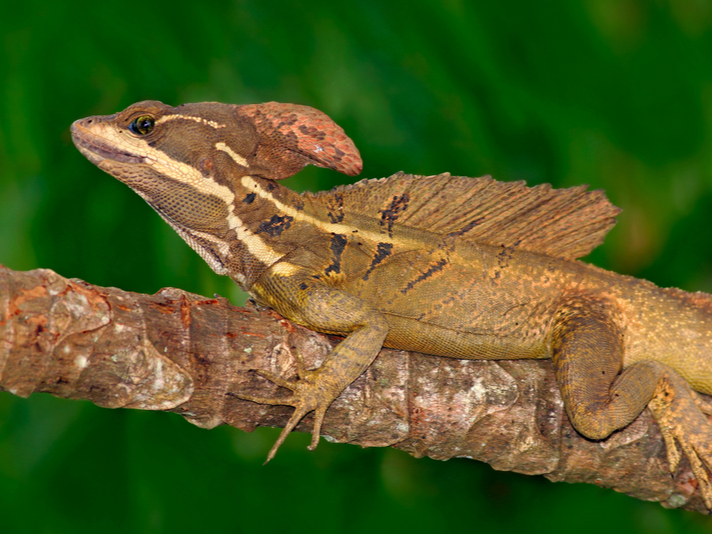 This medium-sized lizard can be found in southern Florida.

This medium-sized lizard is quite common in southern florida, with populations documented as self-sustaining and expanding. Little research has been done on the South American Brown Basilisk's (Basiliscus vittatus) impact on Florida’s native flora and fauna, but they most likely are feeding on small invertebrates along with plants. This agile lizard is able to live comfortably in both terrestrial and semi-aquatic habitats of Florida. They are native to South America, where their populations are kept in check by natural predators. Since they have little to no predators in Florida, populations are increasing uncontrollably. 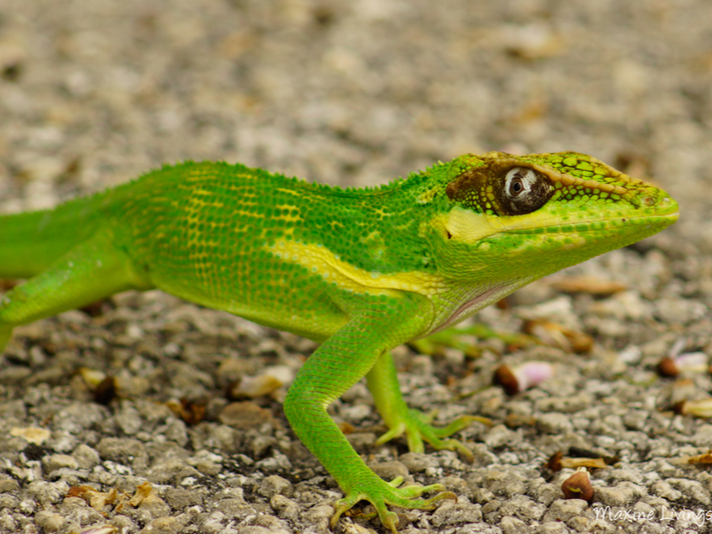 The Cuban Knight anole is firmly established in much of south Florida.

The Cuban Knight anole (Anolis equestris) was introduced via the pet trade in the 1950’s. Their populations are self-sustaining and expanding. They utilize Florida’s arboreal and suburban habitats, where they prey on smaller lizards, frogs, and birds. They are also opportunistic herbivores eating nearly any plants within natural Florida habitats such as the pinelands and rockwood hammocks. They are larger lizards with bright green coloration all over their bodies. They are typically seen hanging out and blending in on the bark of trees! 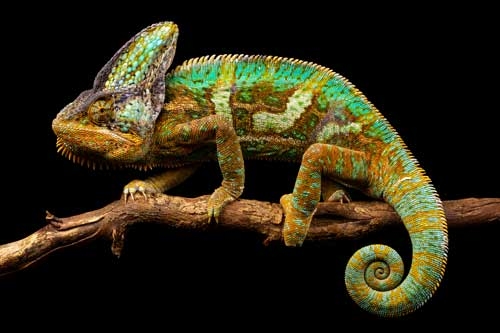 The veiled chameleon, invasive in Florida, is widely captibe-bred.

Relatively new on the scale of Florida’s established invasives, veiled chameleons (Chamaeleo calyptratus) were purposely introduced via the pet trade from captive breeding. They come from humid habitats in Saudi Arabia and Yemen, making Florida the perfect artificial and unnatural habitat. Little to no research has been done on their effects, but populations are predicted as established and expanding, where they out compete other lizards and consume insects, plants, and smaller lizard species. 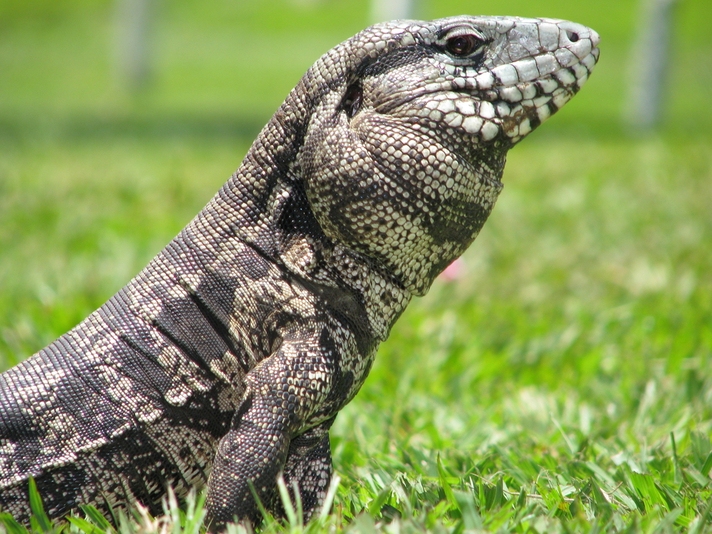 This large lizard from South America is established in a large range within Florida. They are opportunistic omnivores, eating everything from native plants, birds, mammals, and eggs. Removal programs and research on their impacts are currently being organized by state and private organizations. Probably released by irresponsible pet owners, Argentine black and white tegus (Tupinambis merianae) have quickly become established and are expanding in Florida’s suburban, disturbed, and natural areas.

Although these reptiles are beautiful, not at fault, and only trying to survive, their unnatural presences are causing devastating results for florida’s natural habitats and animals. Little research, funding, or effort has been organized for many of these invasive species, but awareness is the place to start for hopes in preserving the natural ecosystems of Florida.