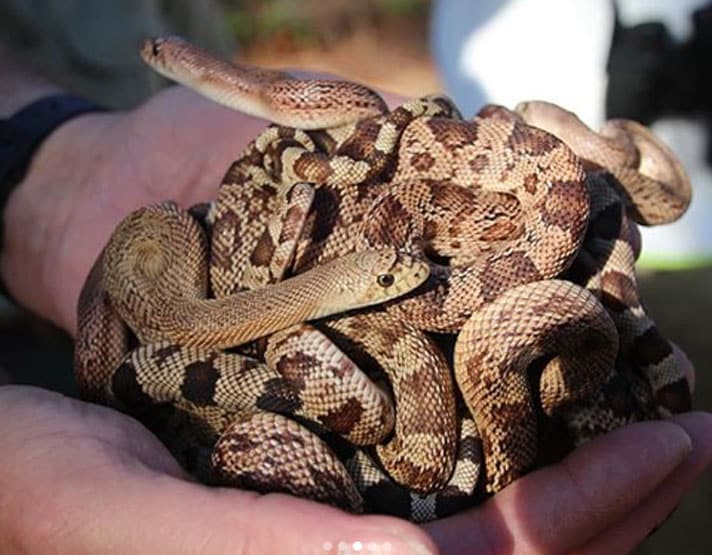 The Florida pine snake (Pituophis melanoleucus mugitus) is a protected species in the state where it is listed as threatened. They are one of the largest non-venomous species in the the eastern United States, and they are found all throughout Florida except the Keys, Everglades, and extreme southwestern Florida. Little is known about their behavior, population, and natural history, so it was extremely exciting when two pine snake nests were found during a tortoise relocation. Sadly, the Florida pine snake is rarely found in its historical ranges due to habitat loss and fragmentation due to development and agriculture. They are declining ecologically, and are documented as an imperiled species of Florida.

Pine snake discovery 🐍 Two Florida pine snake nests were discovered during a gopher tortoise relocation effort. These are only the second and third nests belonging to this subspecies ever to be found! Our biologists incubated the eggs and released all of the babies back into the wild. The Florida pine snake is a State Threatened reptile that spends most of its time underground. It is a commensal species with the gopher tortoise, meaning that it often uses the same burrows. This knowledge will help us conserve one of our state’s imperiled species. Swipe up on our Instagram Story to see more pictures! FWC photos #PineSnake #Snake #Nest #Discovery #GopherTortoise #Burrow #Florida #Wildlife #Conservation #MyFWC #FWC

Since little is known about this snake, it was extra exciting when the two Florida pine snake nests were found. Biologists with the Florida Fish and Wildlife Conservation Commission then carefully collected and artificially incubated the eggs. The species lays 4-12 eggs per clutch, and incubation is typically 67-72 days. 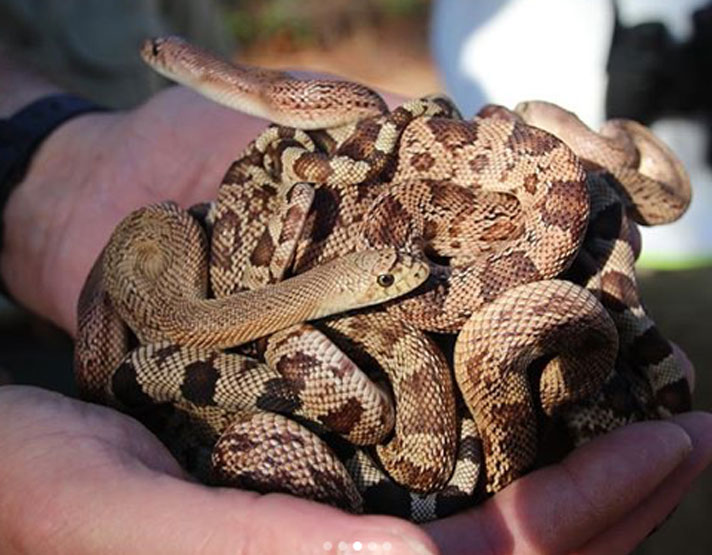 Biologists with the Florida Fish and Wildlife Conservation Commission successfully hatched several Florida pine snakes from two separate clutches found in the wild. They were then released back into the wild.

These nests were only the second and third to ever be found, documented, and successfully incubated as a conservation project for the Florida pine snake subspecies. The project hatched two healthy clutches that were then released back into the wild. This discovery helps understand and ultimately preserve one of the state’s imperiled native reptile species.

The Florida pine snake is a commensal species with the gopher tortoise (Gopherus polyphemus), where they share the burrows the tortoises create, live in, and leave behind. They feed primarily on small mammals within their natural habitats, including the pocket gopher, which they also share burrows with. They require dry sandy soils for their burrows and nests, and are documented living in abandoned fields, pinelands, scrub, sandhills, and pine forest habitats. They spend most of their lives underground, which makes them difficult to study naturally. The species is threatened with dangerous declines, and is protected by the state, but not federally. Pine snakes are a relatively well known choice in the pet trade with successful captive breeding efforts by hobbyists. They come in sandy yellow, tan, and brown colorations.