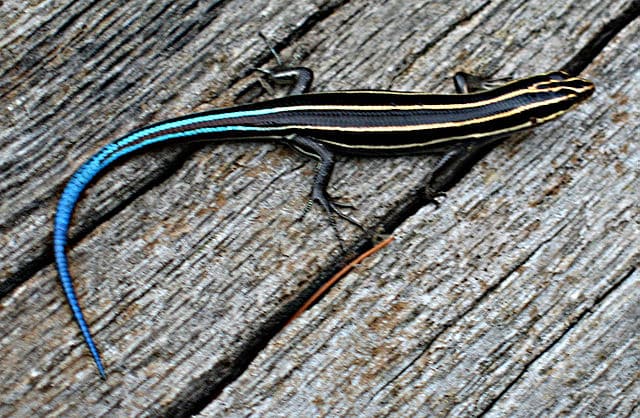 Plestidon fasciatus is not native to the state, but could be the result of range extension.

A five-lined skink, native to much of the eastern half of North America into Florida and as far north as Ontario, but not known to occur in Rhode Island, was found on Earth Day last week in Rhode Island's South County by Emilie Holland, an environmental scientist for the Federal Highway Administration.

A Five Lined Skink in Rhode Island? These photos were snapped in South County yesterday, and the observation was…

The reptile, a juvenile, was photographed by Charles Wescott, and two herpetologists confirmed that the lizard was indeed a juvenile Plestidon fasciatus.

“It’s still really cold, so I couldn’t even believe that it was on the surface,” Holland told 10 WJAR. “Usually, this time of year when it’s cold, they would be hunkered in a crevasse or in a log pile. But it was under a free weight in a yard — a big piece of metal, so it was warm and dry under the sun and it was heating up.”

Holland captured the lizard and upon closer inspection, realized that it was not a salamander as she initially thought.

“I was like, ‘Wait. This isn’t a salamander,’” Holland told 10 WJAR. “I’m familiar with the species in Rhode Island. It’s part of my job and I’m also on the board of the Rhode Island National History Survey.” Holland then called two herpetologists who confirmed the reptile was a juvenile five-lined skink.

“I’ve been looking for reptiles and amphibians in the state for over 40 years and I’ve never seen one. I’ve flipped a lot of logs, a lot of rocks, a lot of boards and a lot of metal, so it’s pretty exciting,” Lou Perrotti, director of the Conservation Program at Roger Williams Park Zoo told 10 WJAR.

“We need to find more to really verify that there’s an actual population there, but it’s the first reliable record other than anecdotal sightings in the state,” he said. “So, it could potentially be a range extension.”

Or it could have been a stowaway,. At any rate, the reptile is being kept in an enclosure because it is not native, and the state’s Department of Environmental Management is apparently looking to investigate further.

“Being reptile enthusiasts, it’s going to be a fun adventure for us to go out and look for this thing,” Perrotti told 10 WJAR. “There are still a lot of questions to be answered. I’m really confident that we are going to put a range extension on the map.”

The five-lined skink is one of the most common lizards in the eastern United States. It grows to about 12.5 to 21.5 centimetres (4.9 to 8.5 in) in total length, including the tail, and is dark brown in coloration with five white/yellowish stripes running down the length of its body. Juveniles have dark blue tails, which fade to a light blue as they age. They feed on a variety of arthropods such as spiders, crickets and beetles.