The California kingsnake infected with snake fungal disease was euthanized.

The very fist case of snake fungal disease has been confirmed by the California Department of Fish and Wildlife (CDFW). The snake infected with the devastating disease is a California kingsnake (Lampropeltis californiae) that was found in Plymouth, Amador County, east of Sacramento. 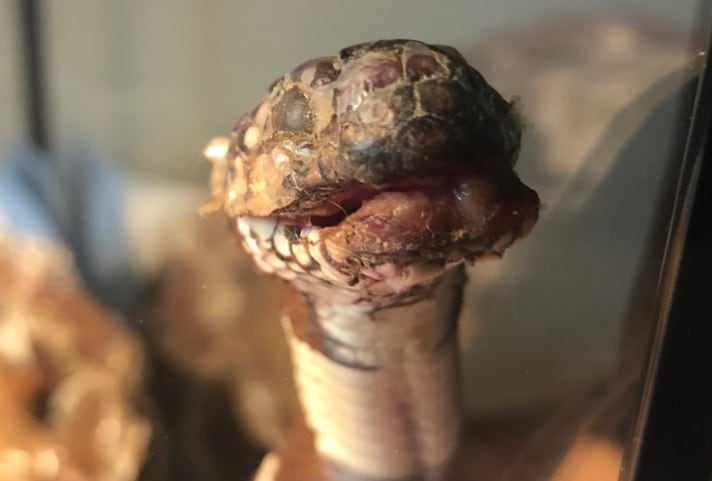 California Department of Fish and Wildlife

The snake was found by a member of the public on the side of the road in an emaciated state. It was brought to Tri-County Wildlife Care for possibly rehabilitation but was humanely euthanized due to its very poor physical state and the potential presence from SFD, according to a press release put out by the CDFW.  The snake was sent to the University of Illinois, where the presence of the Ophidiomyces ophiodiicola fungus that causes SFD was confirmed. The CDFW also detected the fungus on a non-native Florida water snake that was found deceased in Flosom, Sacramento County.

Snake fungal disease is devastating to snakes because it attacks the mouth and face area of the snakes, which prevents them from eating and drinking water. Its symptoms include scabs, lesions and crusty scales. According to researchers, the outermost layer of the skin separates from the underlying skin and the eyes become cloudy even though the snake is not in shed. The face of the snake also becomes swollen. Some species don’t show any outward signs of the fungus, but when they are necropsied, the fungus is found in the lungs.