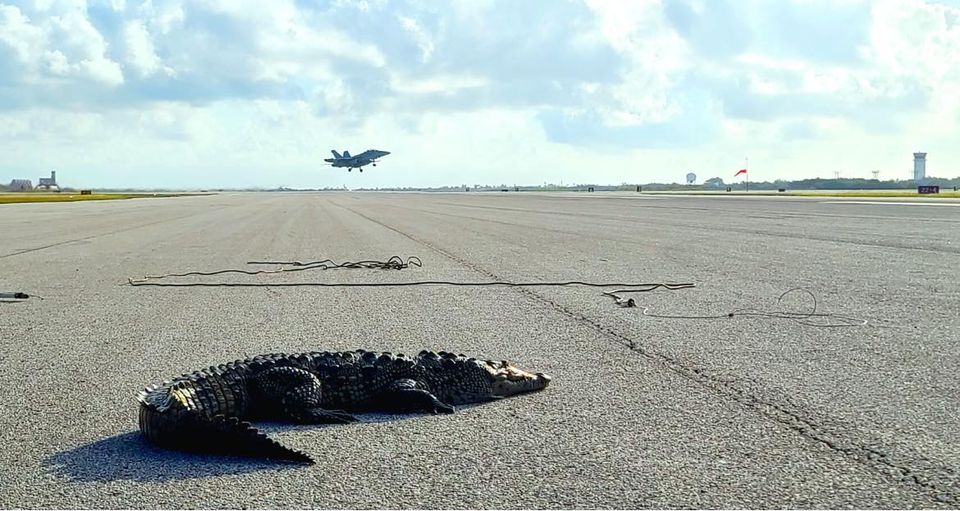 The American crocodile is native to Florida as well as the coasts of Mexico and into Peru and Venezuela. Photo by Rosa Gonzales.

After some coaxing and with some help of some rope, the runway reptile left the grounds.

American crocodiles are widely found in coastal areas and prefer waters with salinity. Sometimes they are found on US Navy airport runways.

An American crocodile (Crocodylus acutus) was out on the runway at U.S. Naval Air Station Key West last week, sunning itself and seemingly oblivious that it was preventing the Navy’s squadron of Super Hornets from taking off and landing.

The situation became so dire that Wildlife Biologist Rosa Gonzales had to call in some reinforcements from the Florida Fish and Wildlife Conservation Commission in an attempt to get the massive reptile to move off the runway and beyond the base fence line. After some coaxing and seemingly with some help of some rope, the runway reptile left the grounds.

NAS Key West posted the news on its Facebook page and followers had a field day.

So you’re saying that the airfield had… “A Reptile Dysfunction?” 😁
Sorry, everyone. I’ll see myself out now,” wrote Keith Haas.

At any rate, the American crocodile is doing well off base property and away from the Navy’s Super Hornets.

How Hard Can Crocodiles Bite?

The American crocodile (Crocodylus acutus) is native to Florida as well as the coasts of Mexico and into Peru and Venezuela. They are widely found in coastal areas and prefer waters with salinity. Brackish lakes, mangrove swamps, lagoons and small islands are preferred habitats. Males can grow to 20 feet in length and weigh up to 2,000 lbs. They are usually smaller at around 9 to 13 feet in length. Females are smaller, growing to about 12 feet in length. IN the United States, they are mostly found on the southern tip of Florida and its population is estimated at 2,000 individuals and growing. These reptiles are more susceptible to cold weather than American alligators, but are more tolerant of saltwater than their freshwater alligator cousins.