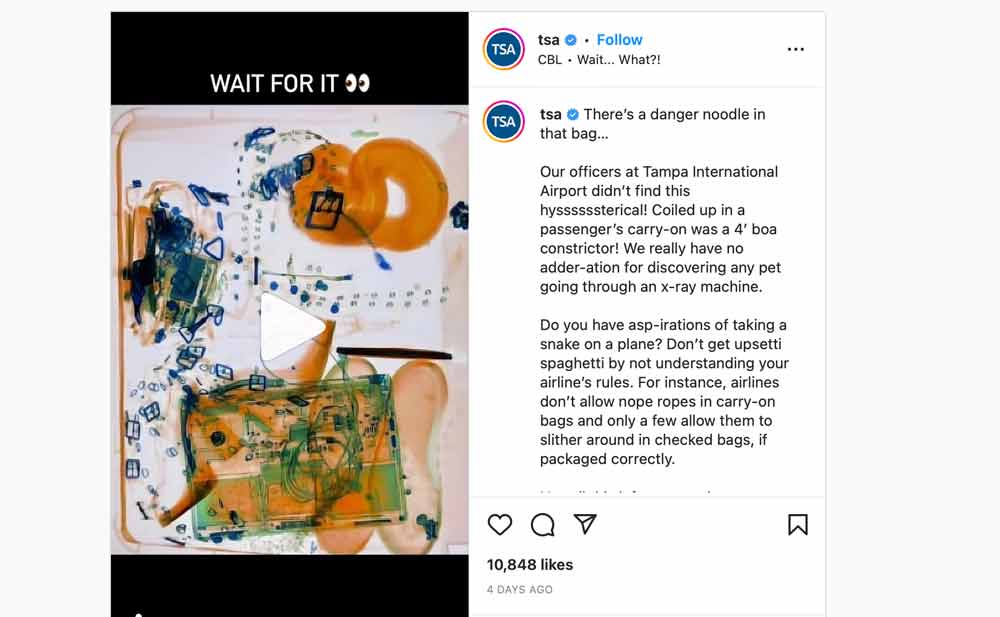 A woman claimed the snake was her emotional support pet.

A woman who last week tried to bring her boa constrictor onto a plane in her carry on baggage was flagged by the Transportation Security Administration after x-rays revealed the four-foot reptile in her baggage. The woman claimed the snake was emotional support boa constrictor, according to the TSA. The snake was denied entry to the plane’s cabin, according to the TSA.

The TSA’s social media time had some light hearted fun with the event, posting some punny statements to Instagram.

“There’s a danger noodle in that bag…

“Our officers at Tampa International Airport didn’t find this hyssssssterical! Coiled up in a passenger’s carry-on was a 4’ boa constrictor! We really have no adder-ation for discovering any pet going through an x-ray machine.”

“Do you have asp-irations of taking a snake on a plane? Don’t get upsetti spaghetti by not understanding your airline’s rules. For instance, airlines don’t allow nope ropes in carry-on bags and only a few allow them to slither around in checked bags, if packaged correctly.”

“Has all this left you wanting to squeeze out more travel answers? You can always mamba on over to our friends at AskTSA! They’ll rattle out responses to your questions 7 days a week, from 8 a.m. – 6 p.m. (ET).”

For a time, various pets labeled emotional support animals were allowed in airplane cabins, largely free of charge. Those days ended when the U.S. Department of Transportation finalized rules on December 2, 2020 that allowed airlines to treat emotional support animals as ordinary pets. Legitimate service dogs and Psychiatric Service Dogs will still be allowed own flights free of charge. Snakes will have to be in checked baggage, and that is if the airline allows snakes to fly.