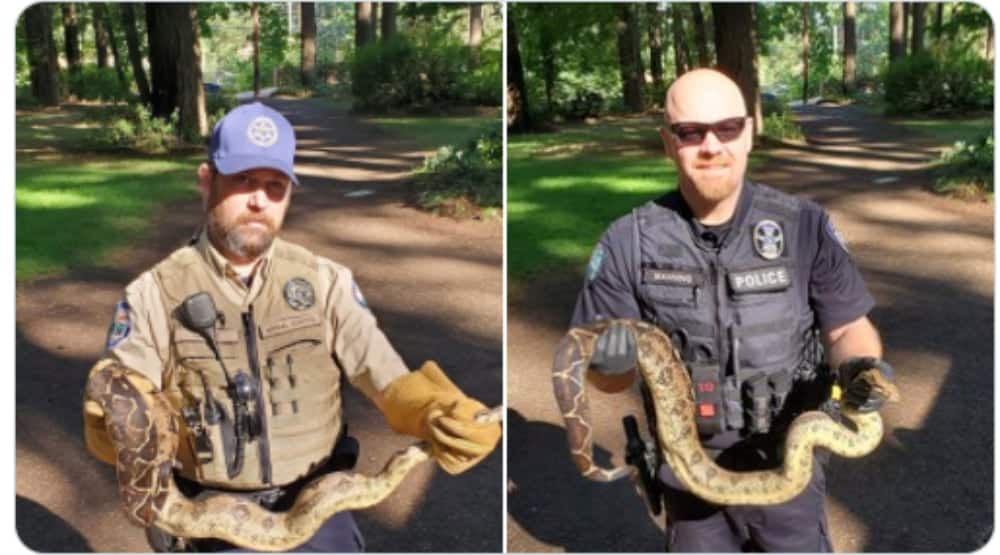 Someone apparently released eight large constricting snakes into a park in Washington State. The snakes, two of which are Boa constrictors, and one a

Someone apparently released eight large constricting snakes into a park in Washington State. The snakes, two of which are Boa constrictors, and one a ball python, were captured July 22 by the Camas Police Department’s animal control. The remaining five snakes were not identified, other than pythons. No word on who the owner of these reptiles were, but based on the photographs of three of them, they seem apparently healthy.

Someone apparently reported seeing large snakes in the park, near a parking lot, and when the Camus Police Department animal control came onto the scene, they were able to secure 8 snakes. The snakes measured between 3 feet and 6 feet in length.

There is no reason for someone to release their pets into the wild, if this is what occurred. They can be surrendered at an animal shelter and even a local reptile store. Police said the snakes were taken to an animal shelter for a health checkup and potential re-homing.

You’ve heard of other duties as assigned, well maybe not like this! With the help of Animal Control, Camas PD helped remove 8 python snakes from a Camas Park today. Folks please do not release pets into the wild! pic.twitter.com/dQ324trk9z

Ball pythons are one of the most popular reptiles amongst keepers. A fairly docile snake, they rarely exceed five feet in length and have specific care requirements. Boa constrictors can grow to around 10 feet in length. One subspecies, the Argentine boa constrictor (Boa constrictor occidentalis) is listed on Convention on International Trade in Endangered Species of Wild Fauna and Flora (CITES) Appendix I, and is threatened with extinction.