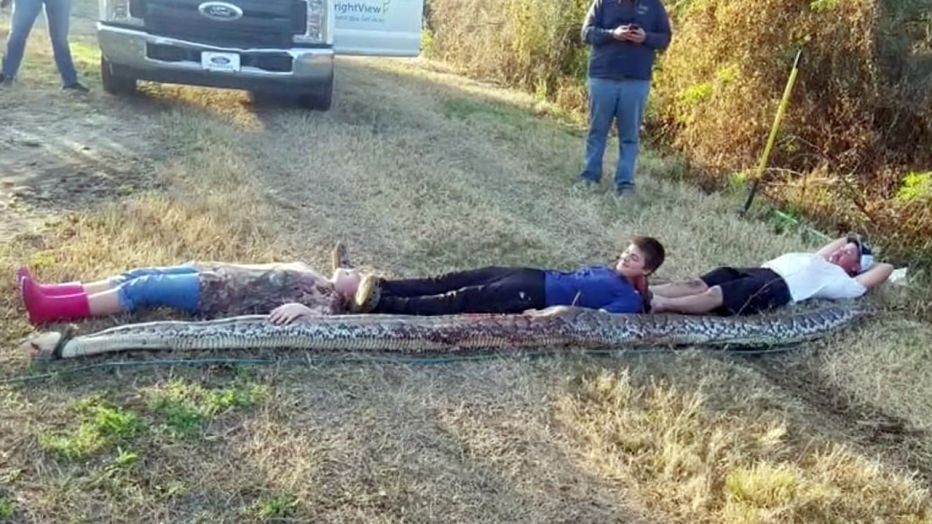 A 16-foot Burmese python (Python molurus bivittatus) was apparently sunning itself on private property when Aaron Brown and his mother spotted the reptile while driving on their property.

“I drove past it and said, ‘That’s a big snake,'” Brown told Fox13. “I had my mother with me and she said, ‘Well, get out and get it.’ I said, ‘You get out and get it. If that joker catches me, you can’t help me,'” Brown said. So Brown did the next best thing and called his cousin, William Wilkinson to assist in the capture of the invasive species.

The snake then moved into a culvert and as soon as Wilkinson and his son Hunter arrived, the trio moved on the snake to capture her. They eventually shot the snake and after laying three children on the ground to get a rough guesstimate of the large constricting snake, they finally got a tape measure and realized the snake was bigger than they thought, at 16 feet 4 inches and weighing roughly 300 pounds.

After they took measurements, the family called Dusty “Wildman” Crum, an orchid grower who is also licensed by the state to hunt pythons, to pick the reptile up. Crum skinned the snake, and during the skinning, it was revealed the big female was gravid with 100 eggs.

“Hopefully this is a rogue snake and they haven’t migrated this far north. These boys stopped an invasion by eliminating a big breeding snake like that,” Crum told Fox 13.

Crum is no stranger to hunting large pythons in Florida, having won the South Florida Water Management District’s Python Elimination Program in 2016 and took second place in 2013.

The Burmese python is one of many invasive species that have now call the Sunshine State home. The species is well-established in the Florida Everglades and authorities are actively trying to reduce their populations. It is also one of the most popular of the large constricting snakes that are kept by experienced reptile keepers.