The mock viper can change the shape of its pupils to resemble a venomous snake.

Herpetologists with the Suranaree University of Technology, Nakhon Ratchasima, in Thailand were conducting field work in the forests of Southeast Asia back in 2012 when they came across a snake that was basking on a gravel pathway. One researcher captured the reptile, grasping it behind the head and picked it up, and in the process watched how its eyes shifted from round pupils to vertical slits, like that of a viper. The researcher immediately dropped the snake, thinking that he had picked up a venomous Malayan pit viper. This got the researchers to further study the snake, a mock viper. 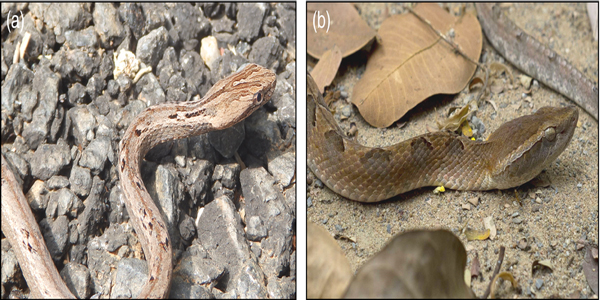 The mock viper (Psammodynastes pulverulentus) is a small, mildly venomous colubrid snake native to much of Southeast Asia, the Indian Subcontinent, and areas in southern China, that is notable in that it has the capability to change the shape of its eye pupils to resemble the venomous Malayan pit viper (Calloselasma rhodostoma).

The mock viper does this as an act of mimicry, the researchers believe, in which an animal resembles another animal in an effort to discourage would be predators. The Colubrid snake does this when in defensive mode, and when in a state in which it is not threatened, its pupils stay round.

According to the report, there isn’t another known Colubrid snake that has the capability to change the shape of its pupils in an effort to ward off potential predators. They do note that the Malayan bridle snake (Dryocalamus subannulatus) mimics the highly venomous Malayan krait (Bungarus candidus) both in the physical looks of the krait as well as its behavior of hiding its head under its coils when threatened.

The paper can be read in the Ecological Society of America journal.