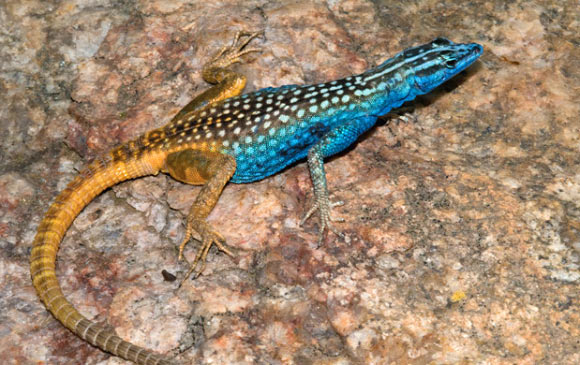 !0,000 Titicaca Water Frogs Die in Peru And Nobody Knows Why
Herp Queries: When Geckos Lick Their Eyeballs, Are They Cleaning Them?
Phoenix Residents May Be Able To Shoot Snakes On Sight If House Bill Becomes Law

Scientists from Australia have discovered and described a South African lizard of the genus Platysaurus and named it after famed naturalist, Sir David Attenborough. Dr. Martin Whiting of Macquarie University in Australia described the species in honor of Attenborough for the latter’s contributions to science and the natural world.

The lizard, Platysaurus attenboroughi, or Attenborough’s flat lizard was discovered in South Africa’s Northern Cape Province and the Fish River Canyon in Namibia. The lizard can be found in arid to subtropical region of the province in rock formations.

It measures 2.8 to 3.2 inches from snout to vent and has a blue head and mid body ith lateral white lines on the head that convert to white spots on the mid body region. The rear legs, body and tail area are a golden coloration with light white spots.

Attenborough’s flat lizard was previously confused with the Cape flat Lizard  (Platysaurus capensis), which is very similar in coloration, but genetic analysis by Dr. Whiting proved that the two species are indeed distinct.