A new species of lizard has been discovered in the Peruvian Andes that inhabits forest streams high up in the mountains, according to a research paper published today in Zookeys. The lizard, Potamites montanicola, was first captured by herpetoculturist Karla Garcìa as the herp was crossing a trail next to a creek, according to a report in Monga Bay. 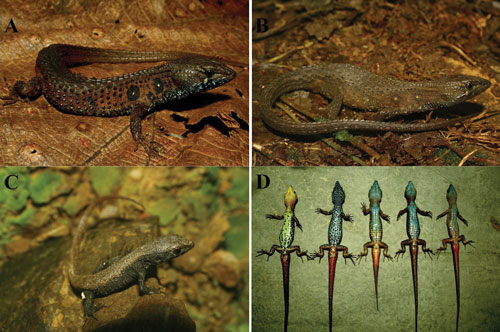 The lizard is semi-aquatic with a body of about 2.5 inches and a tail of around 4.2 inches. It has dark brown legs with a brown head and red body and tail, with a bluish hue under its jaw. It also retains four black spots starting between the head and the front legs. The lizard's range includes the Cordillera de Vilcabamba and Apurimac river valley at elevations between 1,570 and 2,100 meters. Most specimens collected were found sitting atop rocks next to streams at night, leading the researchers to believe that the herps are nocturnal. One specimen was found during the day. According to the Zookeys paper, Potamites montanicola is the only Peruvian lizard found more than 2000 meters in elevation that is exclusively from the montane forests. The full paper can be found at 10.3897/zookeys.168.2048