Scent And Snake Matings Of The Red-sided Garter Snake

A new study has shown that boosting the estrogen levels of male garter snakes causes them to secrete the same pheromones that females use to attract suitors, and turned these males into just about the most desirable snake in the neighborhood – attracting dozens of other males eager to mate with them. 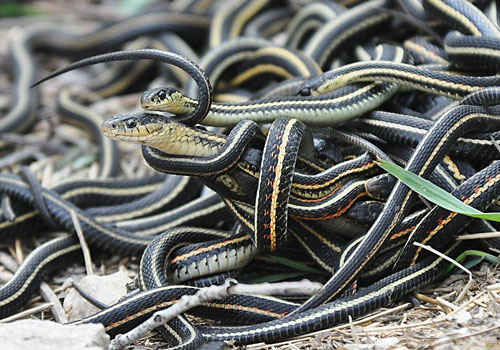 According to the scientists involved, this experiment, carried out in the famed garter snake caverns north of Manitoba, Canada, is one of the first-ever in a field setting to quantify the effects of estrogen as a stimulant of pheromones (airborne chemical messengers).

Each spring, tens of thousands of snakes emerge after hibernation from these limestone caves in an intense competition to mate. Female snakes are swamped as they emerge from the caves by multiple males that wrap around them, forming large, twisting balls, each attempting to be the first to mate with the female. Afterwards, a different pheromone is emitted by the female, confirming that mating has occurred and causing the other males to lose interest and seek another mate instead.

In this study, male snakes were implanted with a small capsule that raised their estrogen level to about that of female snakes. After a year of this estrogen supplementation, the male snakes exuded a pheromone that caused other males to swarm to them and form the characteristic writhing ‘mating’ balls.

And just as the pheromone production could be stimulated, it could be taken away, the scientists found. When the supplementation was removed for a year, the males reverted to normal function and behavior.

“We thought this might work, but we we’re surprised the results were so compelling,” said Robert Mason, a professor of zoology at Oregon State University and one of the world’s leading experts on reptilian pheromones. “The amount of estrogen the male snakes received was nothing unusual, just about what a normal female would produce.

“And this was not just some laboratory test,” he said. “These snakes were trying to mate in a natural outdoor environment, in which the males were absolutely sure they had identified a female snake.”

The Power of Estrogen

The red-sided garter snake (Thamnophis sirtalis parietalis) studied in this research depends totally upon pheromones so as to enable males to be attracted to and identify female snakes. They actually lick the female with a quick flick of her tongue. The chemical cues are so strong that in this brief instant, from one lick, the male can determine the species, sex, population, season, reproductive condition, size and age of its possible partner.

In garter snakes, the experiments showed just how powerful the mechanism is. Large and older females, preferred by male snakes because they can produce more babies, also have a slightly different chemical signature in their pheromone. Young, small, females can still attract suitors, but not as readily. But when male snakes had their estrogen levels elevated, their pheromone production was so strong that other male snakes actually preferred them to small female snakes!

Snakes rely on their vomeronasal organ in the upper palate (roof) of their mouth to play a key role in this sensing process. Other animals, such as dogs, also have keen vomeronasal sensing abilities, as do people but it’s unclear what role, if any, it plays in human sensory ability, according to Mason.

The estrogen hormone is exactly the same chemical found in many animal species, ranging from snakes to amphibians, fish, mammals including humans. The research confirms once again the unusually powerful role that estrogen can play in biology, and is also relevant to widespread concern about the environmental impact of compounds that mimic the effect of estrogen, found in some chemicals and pesticides.