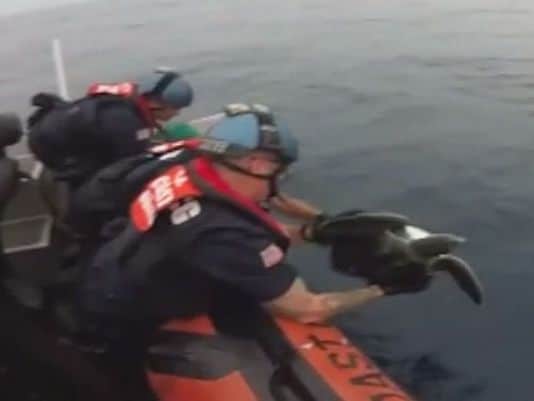 Coastguardsmen on the Coast Guard Cutter Stratton out of Alameda, Calif. were on patrol looking for drug runners when they happened upon a pair of sea

Coastguardsmen on the Coast Guard Cutter Stratton out of Alameda, Calif. were on patrol looking for drug runners when they happened upon a pair of sea turtles tangled up in fishing gear off the coast of Central America in May 2015. The video was released last week by the Coast Guard showing the crew cutting away the fishing line from the two turtles and setting them free.

"There was no question what we had to do," said Petty Officer 2nd Class Hylan Rousseau, the coxswain of Stratton's interceptor boat. "And no one spoke a word. We immediately moved in to rescue mode." 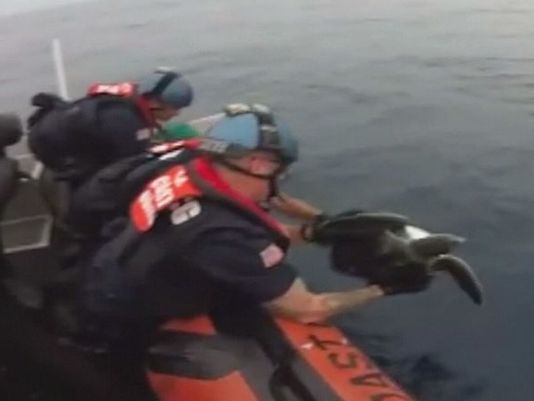 Rosseau and his shipmates went to work, using a pair of sheers to cut away the line from the first turtle, which occurred without incident. The second and much larger turtle had fishing line wrapped around its neck and apparently in an effort to get free from the line, the line just got tighter around its neck. Once the coastguard crew removed the line from the turtle, a bunch of water spewed out of its mouth and he appeared to breath a sigh of relief, which in actuality was probably just a deep breath after having  essentially a noose around its. Before they could release the turtle, the turtle just jumped back into the water and went on its way.