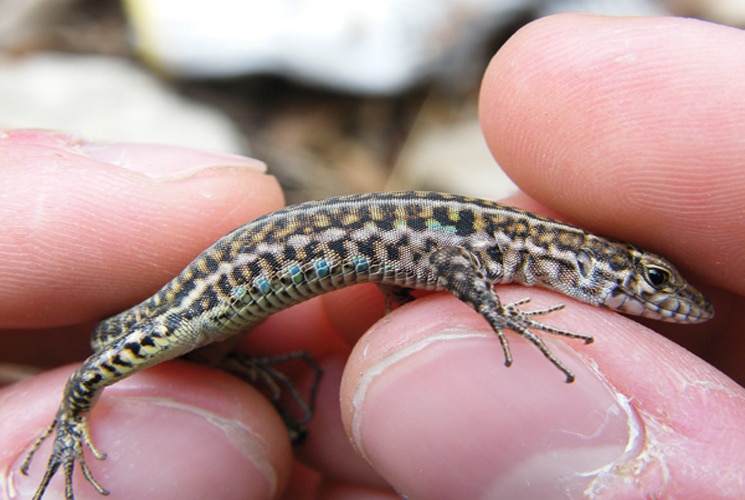 In Search Of Sardinia’s Herps

In October 2008, while attending the VII Congresso Nazionale/VII National Congress Societas Herpetologica Italica in Oristano, Sardinia, we had the go

In October 2008, while attending the VII Congresso Nazionale/VII National Congress Societas Herpetologica Italica in Oristano, Sardinia, we had the good luck to observe some interesting species of the island’s herpetofauna.

We decided to stay in bungalows at a local campground, and while walking to the reception area, we spotted our first herp of the trip, a little Podarcis species. While running after it to try to identify the species, we scared what at first we thought was a grasshopper, but looking again, we discovered it was a Sardinian tree frog (Hyla sarda). Already happy with this unexpected find, we were shocked to find that the entire area was full of them; we were literally surrounded by dozens, hundreds of Sardinian tree frogs. They were on every surface—pittosporum leaves, oleanders, pines, on the ground and in the grass, as well as around the bungalows, too, on their walls and in both open and indoor showers. Seeing so many of them brought to mind what it must have been like for other Hyla species in the rest of Italy, before their environment was impacted by human encroachment. Sardinia, on the other hand, is a very large island with a very reduced population. 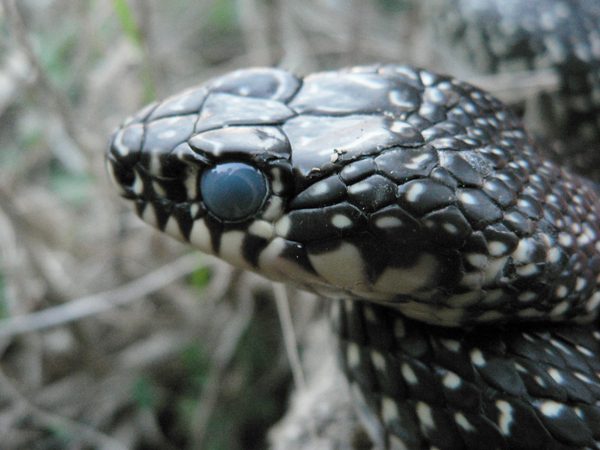 This western whip snake (Hierophis viridflavus) was discovered while it was in the process of shedding.

The campground was near the sea, immersed in a pinewood near some rice fields, and the tree frogs were active both night and day. Adults were most often found in the less-frequented area of the grounds, as well as within the upper zones of bungalow walls, where they would catch insects attracted to the lights. Other species found nearby were the Italian wall lizard (Podarcis sicula cettii), Moorish gecko (Tarentola mauritanica) and Turkish gecko (Hemidactylus turcicus). All three species are found in Sicily, where we are all from, so these were not new to us. 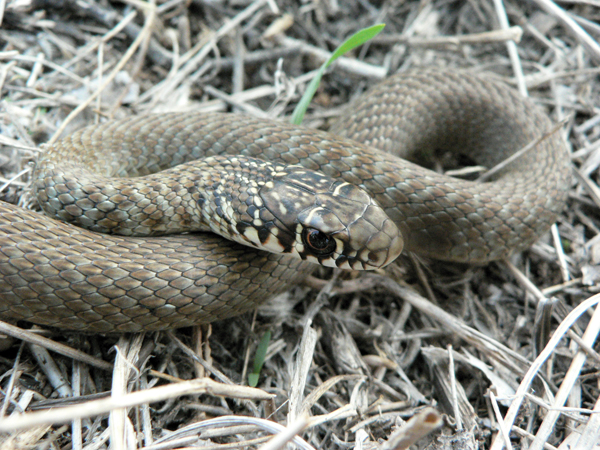 This attractive young western whip snake was one of the group’s favorite finds toward the end of the trip.

We made some excursions, and the first of these was to the Supramonte and Monte Corrasi in eastern Sardinia. It was here that we hoped to observe the Supramonte cave salamander (Speleomantes supramontis). Unfortunately, probably due to the fact that we were there during the day, and on a day without high humidity, we didn’t find any. Some friends told us, however, that at night or during rainy days, cave salamanders were abundant and easy to find.

As if this was not disappointing enough, when we returned to the car we discovered that Fabrizio had lost the keys somewhere up the mountain. We had to walk to the nearest city by foot and eventually were picked up by some other friends who were also attending the congress. The upside, however, was that while waiting for another set of keys to be sent by Fabrizio’s parents, our stay would be extended from a week to 11 days. This meant we’d have more time to try to see more of Sardinia’s herps.

Walking Up the Mountain

Our helpful friends joined us for an excursion to the Penisola di San Giovanni di Sinis, located a few miles away from our campground. The habitat there presented a cover of brush and garrigue, and it was quite arid. We observed no endemic animals, but were still happy to find the Balearic green toad (Bufo balearicus), displaying its typical coloration that includes tiny red dots. We also found the Sardinian subspecies of the ocellated skink (Chalcides ocellatus tiligugu), and near a pile of construction wreckage we found an adult western whip snake (Hierophis viridiflavus) that was in the process of shedding. The snake was 50 inches long and exhibited the usual black and yellow coloration of the peninsular specimens (in Sicily, where we were used to seeing it, this species is entirely black). 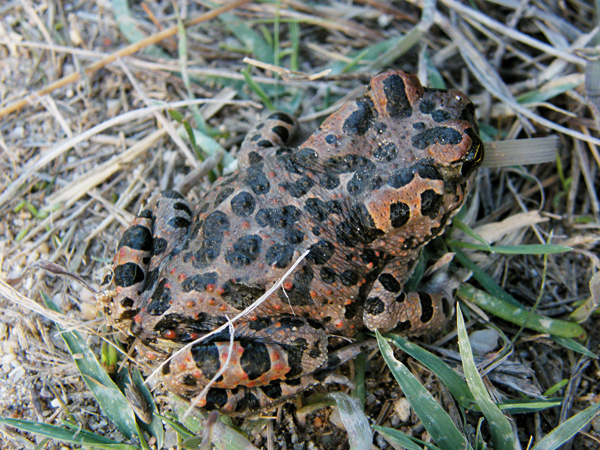 Eventually, once we had a new set of car keys, we returned to Monte Corrasi a second time. This time it was even sunnier than the first visit, so it was horrible for salamanders, but perfect for reptiles. We parked in Oliena, the town at the base of the peak, and began walking along a street that ran up the mountain. Our first find on the way up were two little geckos beneath a pile of stones. These were two young European leaf-toed geckos (Euleptes europea). They were a bit similar to the Turkish gecko, but to tell the two species apart you have only to look at their toes. The Turkish gecko has narrow toes with sharp tips, while the toes of the leaf-toed gecko are more rounded. We took many photos of the two geckos and released them before continuing up the mountain.

The street ran along high rocky walls, upon which we observed many Tyrrhenian wall lizards (Podarcis tiliguerta) as they basked. A bit further along, we found in the middle of the street the remains of a small lizard that had chosen the worst moment to cross. Upon closer inspection we were dismayed to discover that it was a pygmy Algyroides (Algyroides fitzingeri), a fascinating species with highly leathery skin, a red head and yellow-orange belly. Of the same precious species, we managed to catch only one other small individual that escaped from our hands before we could take any photos of it.
We continued our ascent, and after a few curves spotted a young Sardinian grass snake (Natrix natrix cetti) displaying its typical coloration and pattern of black rings on a gray dorsum. We spent a half-hour taking photos of this rarity, which lacked the black and white spots behind the neck found on the peninsular and Sicilian specimens.

One More Shot at Salamanders

Back at the campground, because we had failed to find any cave salamanders while at the Supramonte, we decided to try to find another species of the same family in a different place. A friend suggested we visit the Cave of San Giovanni, near the little town of Domusnovas, roughly 55 miles from Oristano and about 31 miles from Cagliari. It was there that we would search for the Gene’s cave salamander (Hydromantes genei). 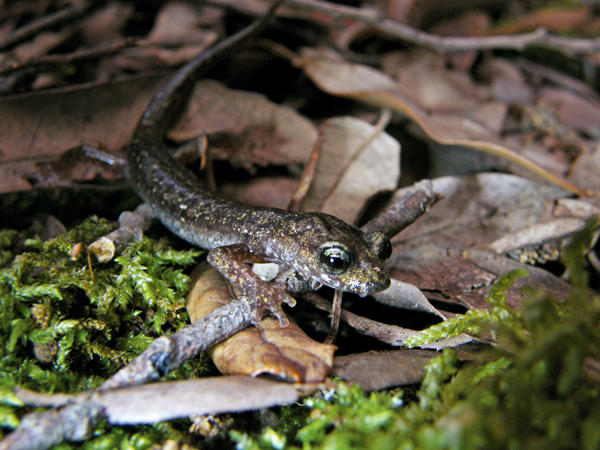 Success! A number of Gene’s cave salamanders (Hydromantes genei) were found while exploring the humid areas of the dry riverbed near the Cave of San Giovanni.

Upon arrival we entered the cave, which is a popular tourist attraction, and found no salamanders. It was too dry, frequented by humans, and full of pigeons. Back outside and opposite the cave entrance, we walked for a few hundred yards before reaching a riverbed. There was no water, but the humidity level was high. We began lifting rocks and wound up finding five specimens of our target salamander within 30 minutes. By then the sunset was imminent, so we took as many photos as we could and returned happy to where the car was parked. 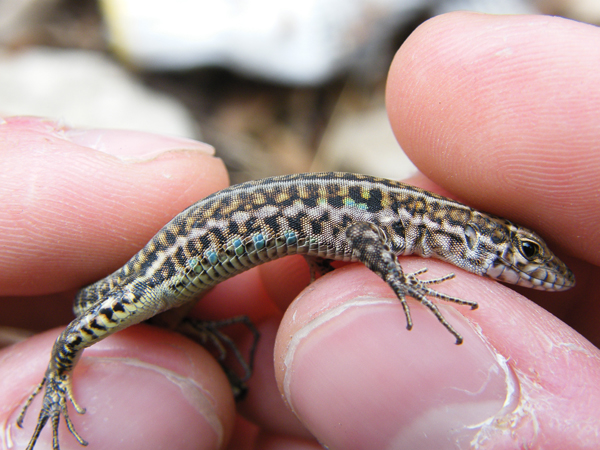 Many Tyrrhenian wall lizards (Podarcis tiliguerta) were seen on rock walls alongside the street on the way up Monte Corrasi.

There was a little stream near the parking lot in front of the cave, and there we found another non-endemic species, an edible frog (Pelophylax esculentus). Until that time, only two isolated spots on the south coast of Sardinia were known localities where this green frog had been introduced. It had never been reported as being found at the Cave of San Giovanni, and so we informed the Italian community of herpetologists of our discovery.
The day before our departure we went back to the peninsula of Sinis, to an area called Seu. Several interesting species have been reported as having been found there, including Discoglossus sardus, Algyroides fitzingeri, Natrix maura and Testudo marginata, but we weren’t so lucky to find any of these. Apart from some additional green toads and ocellated skinks, and just the plastron of a spur-thighed tortoise (Testudo graeca), the best find of the day was a young whip snake that displayed a wonderful gray and orange coloration. 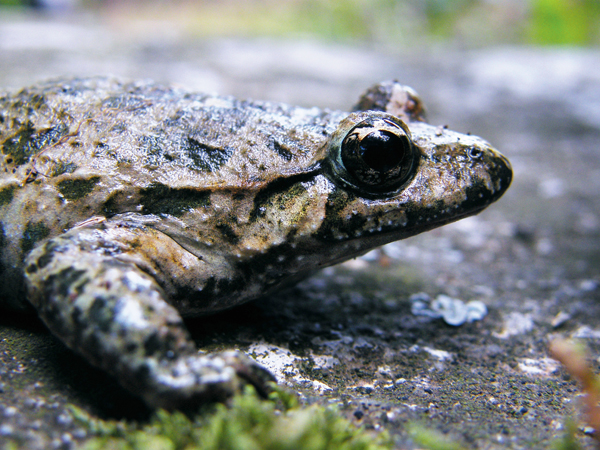 On the last day in Sardinia, good fortune smiled when a Tyrrhenian painted frog (Discoglossus sarda) was found.

Later, we traveled to the peninsula of San Marco, south of Seu, where we would have liked to see some tortoises. Even though we didn’t find any, our tiredness and lack of good fortune was repaid by the beauty of the place and by a spectacular sunset.

On the last day, a bit of luck came back to our side, during our excursion to the Monte dei Sette Fratelli (Mount of the Seven Brothers), 18 miles northeast of Cagliari. Even though we couldn’t find any Sardinian brook salamanders (Euproctus platycephalus), we did find an adult Tyrrhenian painted frog (Discoglossus sardus) under a rock near a semi-dried pond. We scoured the stream connected to the pond and found it in a very good state, with many pools and curves that appeared perfect for brook salamanders, and we had also read that during October, Euproctus are especially active. We were quite surprised not to find one, but we also had very little time that day because two hours later our boat would be leaving Sardinia.
So we gave it up there, happy for the whole trip that allowed us to see many new species for us. We headed toward the port, with the aim of someday returning to the island to see all the species that we hadn’t been able to see that time.

Simone Anzà has a degree in natural sciences and is specializing in conservation and ecology at the University of Pisa. His scientific interests are primarily herpetology and ethology of primates. He has published several herpetoculture articles. FABRIZIO IL VIGNI is pursuing a Ph.D in sociology of sciences in Paris. He has published three books and more than 40 articles about herps and herpetology. FULVIO LICATA has a degree in natural sciences and has published several articles about reptiles and amphibians, as well as a book. He is also a passionate naturalistic photographer.