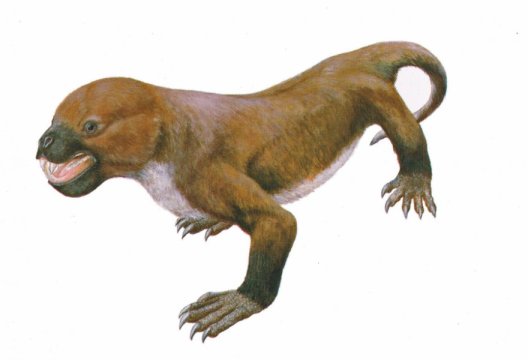 Tritylodontids, mammal-like reptiles lived alongside mammals for a while.

Dozens of fossilized teeth discovered in Kuwajima, Japan have been attributed to a new species of tritylodontid, a family of animals that links the evolution of mammals from reptiles, according to a news release put out by Kyoto University.

"Tritylodontids were herbivores with unique sets of teeth which intersect when they bite," said study author Hiroshige Matsuoka of Kyoto University. "They had pretty much the same features as mammals — for instance they were most likely warm-blooded — but taxonomically speaking they were reptiles, because in their jaws they still had a bone that in mammals is used for hearing."

The finding of these fossils suggest that tritylodontids, which are mammal-like reptiles, lived for millions of years during the Jurassic area at the same time as the earliest mammal species, dispelling the notion that mammals killed off the mammal-like reptiles as soon as they arrived.

The accepted notion was that as mammals came into prominence, the tritylodontids died off as they competed for the same herbivorous food. However, Matsuoka and his team of researchers say the trytylodontids survived for at least 30 million years longer than paleontologists had believed.

"This raises new questions about how tritylodontids and their mammalian neighbors shared or separated ecological roles," Matsuoka said.