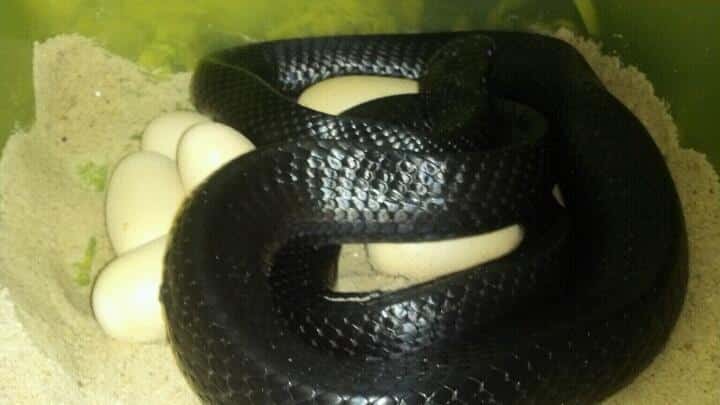 After four years of releasing the indigo snakes, the population is slowly returning to Alabama.

I am lucky enough to work with Eastern Indigo snakes (Drymarchon couperi) at Auburn University. The Eastern Indigo snake is threatened throughout its range and thought to be extirpated (extinct) from the Florida panhandle, Alabama and Mississippi. Habitat loss and fragmentation from agriculture and urbanization are the main reasons for its decline. A large chunk of native habitat has been managed well for several years so the state and federal wildlife biologists thought a reintroduction plan was a good idea. We have been attempting to reestablish a population in south Alabama for several years.

This story occurred in 2010 just prior to our first release of the snakes raised in a head start program. I was lucky enough to incubate the eggs and raise the hatchlings until they were the appropriate size for surgically implanting radio telemetry transmitters. We were about to release our first batch of 30 of said snakes on the following Monday.  The snakes were housed in massive fiberglass tubs for the two weeks prior to acclimate them to the outside and prepare them to forage for prey upon release. They had lived in the lab previously their entire lives (two years). 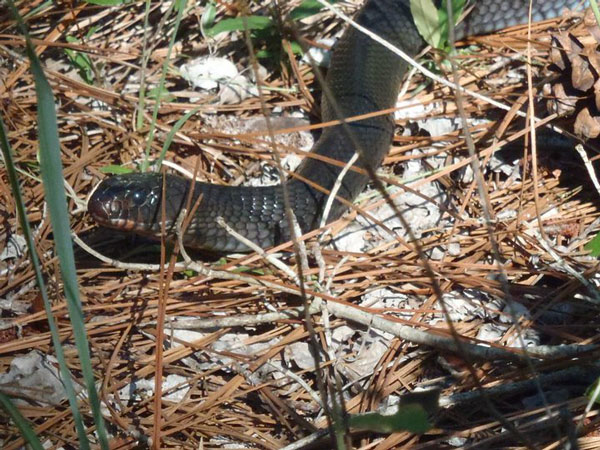 One of the released indigo snakes.

I went to remove the snakes from the tubs (which is a huge job for one person in one day, but that's beside the point) only to find one of them had escaped. A buried drain cover was misaligned and water from the storms the night before had pushed hard enough that it popped off, leaving an escape route for the snake (all and completely my fault). Luckily, we had already surgically implanted the snakes with transmitters, so there was still hope of finding it. 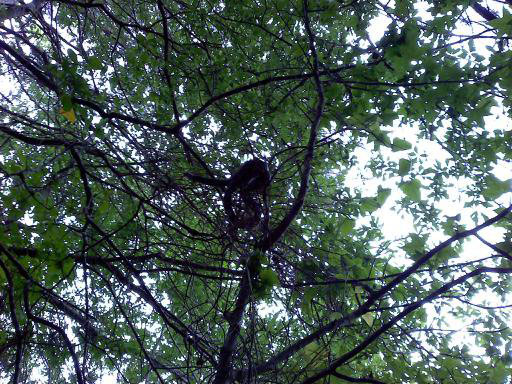 This indigo snake was outfitted with a radio transmitter and was easy to locate. Climbing the tree to retrieve it was another story.

Later that day, I went out to find the escapee. I had done a lot of husbandry work and all kinds of field work but was a newby when it came to radio telemetry. But, I had to try. I got a beep on the receiver after searching for only a few minutes. I chased the beep for a little ways, about 1/10 of a mile down a hill, through thick pine forest to an hole on the side of a pond.

These snakes like to hang around gopher tortoise burrows in the long leaf pine ecosystem of the southeastern United States. So finding that the snake had taken refuge in a hole in the ground was to be expected. Better yet, the snake was demonstrating normal behavior. I attempted to turn the situation into a positive. So all I had to do was catch the little critter. How hard could it be? I fancied myself a biologist and knew some trapping methods that would do the work for me. I set a live funnel trap at the opening of the hole and left to get some lab work done. Surely, the snake wouldn’t slither out while I was standing there.

Later in the afternoon I went back to check the trap. It was empty. I tried the receiver again and was getting beeps from a different direction. Crap. The snake had outsmarted me, left the hole, and somehow missed my trap. I followed the beeps for about ten feet into the woods. Then the beeps weakened, again. So I turned in several directions to find a stronger signal. It was the same. I pointed the antenna at the ground, expecting it to be in another hole. The beep got even weaker. I scratched my head (with the hand holding the antenna). The beep got stronger again. What the heck? I checked four directions and the ground again, with the same results. I finally lifted the antenna higher, thinking it may be far off and I could get a better signal from up high. It beeped louder. After a few minutes of "fiddling" with the receiver I discovered the snake was about twenty feet up a tree, directly over my head. These snakes rarely climb and when they do, they don't climb far. I'd never heard of one being that high up before. 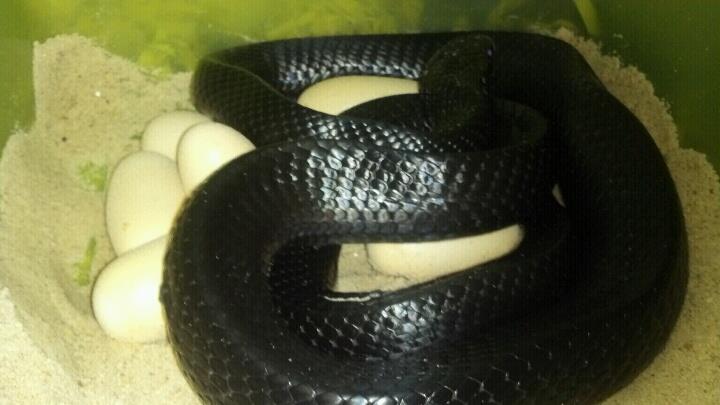 Indigo snake with a clutch of eggs. The author cares for the hatchlings for two years before they are released.

So, I decided to go after it. I really had no choice. I had to get the snake back. It was my fault that it escaped and I was already feeling like an idiot. I climbed about ten feet up and used my monkey-like intellect to poke it with a long stick in an effort to coax it down. I instead coaxed it across. I somehow moved one tree closer and started again, still ten feet up. This time it went down and across to a skinny tree. I figured I could bend the tree down far enough to grab the snake. I was right. I didn't consider the fact that I was almost over the pond. I started pulling the tree down, got within three feet of the little jerk. The only thing I could do was put all my weight on the tree and ride it to the ground. It was effective except there was no ground. In a magnificent athletic leap like that of a hippo performing ballet, I grabbed the snake with one hand and was still holding on to the weed of a tree with the other. I dropped like one of Galileo's balls landing on my back in the mud.

I then, with my sudden adrenaline rush, jumped to my feet holding the snake up as if it were the baby lion king.  I had claimed my prize and was very excited and proud.  I stomped around, covered in mud, like a professional wrestler after just having won the world title. I yelled, "Who's the freaking biologist!?  I'm the freaking biologist!"  Then the snake both bit me and pooped all over me simultaneously. Luckily, unbeknownst to me, there was a wildlife biology class working on the other side of the pond that had witnessed the entire event, and fueled my shame with an unexpected round of applause.

I’m happy to report that after four years of releasing the snakes the population is slowly returning. There is much work to be done, snakes to release and monitor. Luckily, there are some amazing people there to help out. So far almost 100 snakes have been released and over 150 have been hatched, with more eggs already incubating this year.