U.S. Army Research Lab funds the use of accelerometers to enable snake robot to wrap around an object on contact.

It is Official! The California Red-Legged Frog Is That State’s Amphibian!
Would You Poke A Reptile To Get The Photo You Want?
Boy Breaks Into New York Home and Shoots Bearded Dragon with BB Gun

Students at Carnegie Mellon have developed a modular snake robot that can wrap itself around a cylindrical object upon contact. The robotic reptile has built-in accelerometers that detect when the snake runs into an object. It then automatically wraps around that object in a constrictor-like embrace, holding wherever it lands. The researchers however point out that the robotic snake is doing is not constricting, but rather wrapping itself around the object. 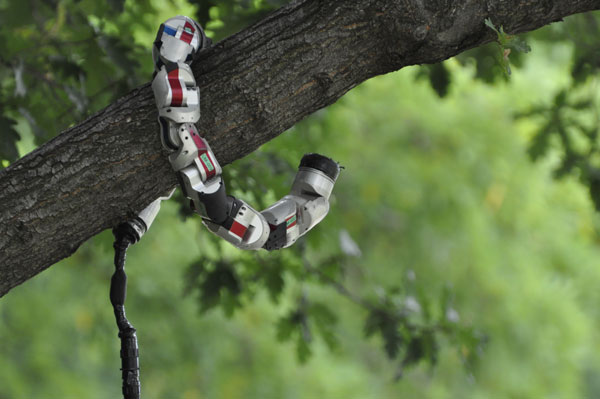 "It's important to note that there is a difference between wrapping and constricting—this robot snake does the former, but not the latter—it doesn't squeeze the target, it simply wraps itself around it to allow it to hold on," CMU officials said in a statement. "Though, it's not beyond the pale to consider that constricting could also be added to the snakes' abilities, especially when noting that the U.S. Army Research Lab is paying for the research. The researchers on the project don't divulge what sort of objectives the Army may have in mind for the snakes and thus any theories on their use (such as a weapon) at this time would be purely speculative."

For more information on the different kinds and types of robotic snakes coming out of the labs at Carnegie Mellon University, visit its website here.