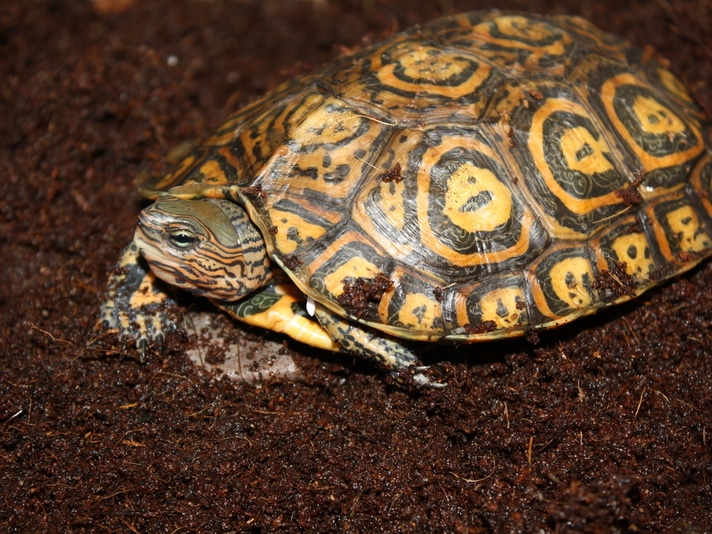 Rhinoclemmys pulcherrima manni is a great turtle to keep if you can find one.

After a long day of enjoying the sun and surf of Cape Cod's beautiful beaches, I find myself enjoying a frosty drink while lounging peacefully in the yard and watching the sun greet the horizon behind my Massachusetts home. Regretfully, it is not long before an uneasy feeling overcomes me and breaks the solitude of late day. I am suddenly and rather unexpectedly overwhelmed with the creepy feeling that maybe I'm being watched. 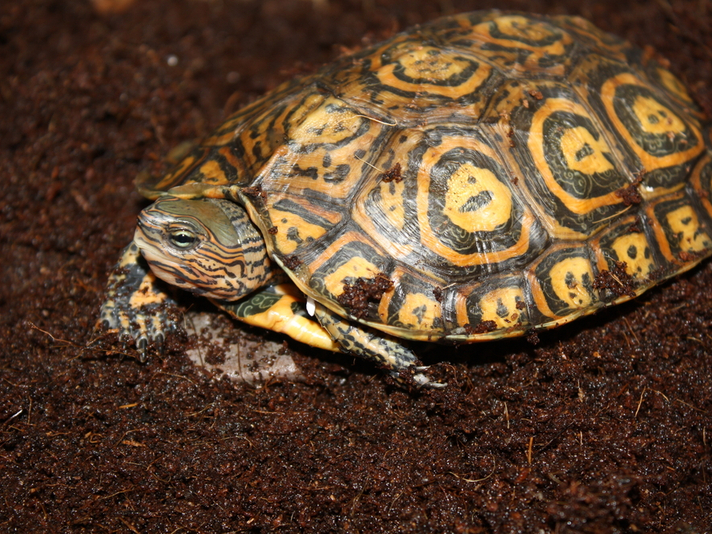 Rhinoclemmys pulcherrima manni is a great turtle to keep if you can find one.

Making a casual, over-the-shoulder glance around the property and seeing nothing, I reluctantly remove myself from the comfort of my Adirondack chair and investigate the grounds further. It is now dusk, and visibility isn't great, but as I approach my outdoor reptile enclosures, the source of my discomfort is evident, for peering out of the darkness from the dense foliage of pokeberry plants, I notice a tiny painted face, and then another, and yet another. My ornate wood turtles have been watching me from the darkness of their overgrown lair. Timid to start, it is not long before they become confident and emerge from the shadows, eagerly accepting food from my fingers. The heat of the day has dissipated and the cool ocean air has raised the humidity to produce an evening dew. It is the preferred ambience for ornate wood turtles, and it is their time to shine!

Of these, the most commonly encountered subspecies in captivity, and the one I will focus on here, is the ornate wood turtle (R. p. manni). Found the furthest south of the four subspecies, and inhabiting lowland scrub and moist forest land, the range of R. p. manni extends from southern Nicaragua to northern Costa Rica. Of all of the Rhinoclemmys pulcherrima subspecies, R. p. manni prefers it the wettest and is found in the most tropical environments. Notably the most colorful of the Central American wood turtles, it is adorned with bright red and orange ocelli against an olive-green to black carapace. At first glance, these turtles appear bland, but add water to the equation, and their brilliant colors come to life. The underside of the marginal scutes are bright red, yellow and black. Typical of most R. pulcherrima, the ornate wood turtle has brilliant red striping. Outlined in black, the red striping runs above, between and below the eyes and is also scattered along the olive-green skin of the turtle's legs. The ornate wood turtle can also identified by the thick, dark band of pigment that runs down the center of the plastron.

Males are somewhat smaller and less robust than females, with a carapace length averaging about 7 inches, while females average about 9 or 10 inches. Males' tails are considerably longer than their female counterparts, extending well past the rear of the carapace, and they're also thicker because they contain the male reproductive organ. Males also have a concave plastron designed to aid them in copulation.

Captive-bred Rhinoclemmys pulcherrima manni are rarely available, but quality specimens can still be found. It has taken some time, but this intelligent and personable turtle has won the attention of some dedicated hobbyists, further increasing interest in it and forcing higher prices for healthier animals. Finding severely dehydrated and heavily parasitized specimens in the pet trade just a few years back was the norm, but now, with greater captive-care information available, better care can be provided to ensure healthier turtles. Even so, these turtles often arrive to distributors full of worms and harmful microbes, and they often are in desperate need of rehydration therapy.

Ornate wood turtles are among the easiest of semiaquatic turtles to care for. Their captive care is identical in many ways to that of the eastern box turtles (Terrapene) and the North American wood turtles (Glyptemys).

Although I highly recommend R. p. manni to the turtle enthusiast, it cannot be emphasized enough that an outdoor enclosure, at least for the summer months, is the best way to provide proper captive care for this turtle. Although ornate wood turtles are highly aquatic, especially while young, they are not true pond turtles and require a large land area in which to roam and hunt for food. And although R. p. manni is drought tolerant, it is also best that enclosures include a large body of shallow water (5 to 6 inches deep) in which the turtles can and will soak.

A suitable enclosure (indoors or outdoors) will measure around 6 feet wide by 8 feet long and 8 inches tall, with an easily accessible freshwater pond area about one-third of the enclosure's size. Substrate should consist of approximately 8 inches of loose, sandy soil. Plant the enclosure with tropical or tropical-looking plants, such as broad-leaf cannas or pokeberry, which will give these nonbasking turtles adequate escape from the heat of the day and the privacy that helps them to thrive. They enjoy the darkness of tropical forests, and this atmosphere should be replicated in captivity as best as possible.

Ornate wood turtles love to dig for food and, like eastern box turtles, they have been documented as listening for invertebrates beneath the soil. As omnivores, they also feed on fresh fruits and vegetables, such as bananas, melons and collard greens, as well as small mammals, such as mice and invertebrates such as grubs, beetles and earthworms. Allowing your turtles to dig for some of their own food is enriching to them and will make for much healthier specimens.

If you keep your turtles outdoors, be sure you have a backup enclosure indoors, in which to keep your turtles, even if just for the night, if winter weather becomes severe. Comfortable temperatures for the ornate wood turtle are between 76 and 86 degrees Fahrenheit. Slight fluctuations of temperature by a few degrees are expected and are typically tolerated well at night. Humidity should be around 60 percent.

If you are fortunate enough to be able to keep your turtles outdoors year round, it is important to protect them from harmful weather, such as extreme heat and cold. In climates with very mild winters, this can be achieved by simply constructing a heated dog house that they can enter at their own will. This can also serve as an effective safe house, where you can lock turtles up to avoid predators, such as raccoons, fox and coyotes, as well as dogs.

Although all Central American wood turtles have thick shells into which they can retract themselves quite well, ambitious animals will have little problem extracting your turtles. Even if your turtles are not actually killed and eaten, they may be removed from the enclosure and become lost. Be sure to lock your outdoor enclosures when you are not home so that your turtles are protected from other animals, as well as curious children. Central American wood turtles have extremely powerful jaws, which are capable of crushing the thick shells of rain forest crabs and snails, as well as opening up seeds and nuts. Fortunately for the reptile hobbyist, Rhinoclemmys pulcherrima manni is a passive and seemingly friendly turtle, and the likelihood of being bitten is practically zero. The ornate wood turtle also has powerful arms and sharp nails, especially on the rear digits, which are used for digging and tearing apart food items. Take these features into consideration when holding pet turtles.

Captive breeding of R. p. manni has been achieved, but babies born in captivity may have resulted because specimens were either imported gravid or captive conditions just happened to encourage breeding. In the northeastern states, captives will often begin showing increased reproductive interest in one another toward late summer, when the nighttime temperatures drop. This is when receptive females are often approached by males with great vigor. Reproduction may occur throughout the day, but most often attempts are made in the early morning hours, before the heat of the day. Males will head-bob at females, and at other males present, but rarely, if ever, will aggression beyond that be exhibited. Females may be nipped around the face and neck by overly anxious males during copulation attempts, and these attempts may last several minutes to several hours. Actual bites and injuries rarely, if ever, occur. Copulation may happen in or out of water, often with males being dragged by females from water to land or vice versa.

Approximately 30 to 50 days after successful copulation, females begin to nest in the fashion that is typical of most semiaquatic turtle species. They may excavate a 5- to 7-inch-deep nest in a corner or against some shrubbery inside their enclosure. Nest digging may take as long as two hours. If turtles are interrupted, they may abandon the site and try again later in a different location. Female ornate wood turtles, like many other turtles, will often urinate in the nest to prevent it from collapsing while digging.

Females may lay up to four clutches of three to five eggs per year. Eggs are elongate in shape and may measure roughly 11/4 inches wide by just over 2 inches long. Hatchling ornate wood turtles are typically just under 2 inches in length, and they are considerably darker in color than the adults. Gender can be determined by nest temperature, with cooler temperatures producing males and warmer temperatures producing females. If using artificial incubation, temperatures should be set between 84 and 88 degrees Fahrenheit.

Hatchlings can be cared for much the same as the adults. Although they should be provided the means to become completely dry, hatchlings require higher humidity (about 80 percent) and easy access to clean, shallow water. They require a greater amount of protein and calcium than the adults, and full-spectrum lighting should be used for proper calcium processing and vitamin production. A hatchling diet should be 80- to 90-percent protein, with calcium sprinkled on top of their food twice a week.

Although hatchlings can be left in the outdoor enclosure, it is recommended to rear them indoors. This way they can be monitored for proper growth and development, and many safety concerns, such as predation, can be eliminated. Whenever possible, though, hatchlings should be provided exposure to natural sunlight (be sure to provide access to shade during such times).

The ornate wood turtle is a remarkable and rewarding turtle to keep. It is intelligent, easily handled and pets can quickly learn to recognize their caretakers as sources of attention and food. This behavior strengthens the pet/owner relationship, thus making for healthier specimens and happier hobbyists. Keep in mind that proper hygiene will keep you and your turtles healthy. As with the handling of any animals, wash your hands thoroughly before and after handling your turtles. These amazing animals will provide many years of enjoyment and companionship if you provide for them properly. There is still much to be learned about these amazing animals and any efforts, however great or small, are certainly warranted.

Leo Spinner resides on Cape Cod in Massachusetts and in southeastern Pennsylvania with his children. He owns Skin and Scales exotic reptile presentations (skinandscales.net), as well as The Spotted Turtle Herpetological Institute of Cape Cod.