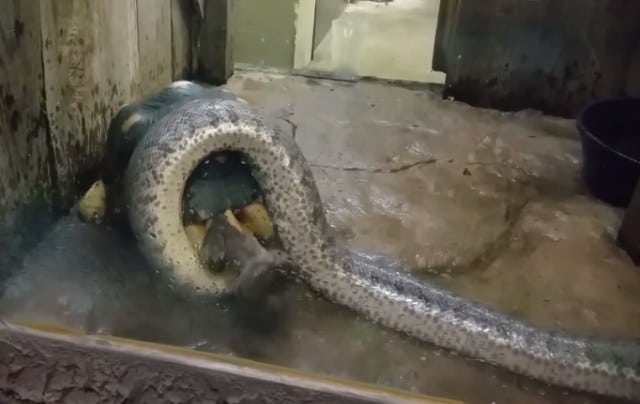 Can You Keep A Radiated Tortoise With A Malagasy Tree Boa? No, You Can't

The Memphis Zoo tried to create a mixed species environment.

The latest viral video making the rounds on social media comes courtesy of a zoo visitor of the Memphis Zoo in Tennessee. The visitor recorded a Malagasy tree boa (Sanzinia madagascariensis) or Madagascar tree boa, attempting to eat a radiated tortoise (Astrochelys radiata). The video clearly shows the tortoise’s head in the tree boa’s mouth, but obviously the boa would never had swallowed the tortoise.

Both animals were unharmed in the incident. The zoo was attempting to create a mixed species exhibit because both reptiles are from Madagascar. Here is a statement from the zoo on the mishap.

“We appreciate everyone's concern today for the animals shown in the video. Animal care is our top priority and this video is disturbing to us as well.  Both animals have been separated and are unharmed.

The intent was to pair a Malagasy tree boa and a radiated tortoise both from Madagascar to create a mixed species exhibit.  Obviously, this combination did not work and we certainly will not try these species together again.  As always we appreciate the concerns and support of our guests.”