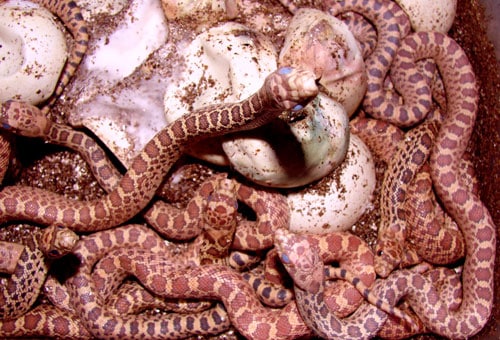 Bullsnakes (Pituophis catenifer sayi) reach sexual maturity at about 2 years of age. However, holding them back until they reach 3 years old may help to ensure not only a healthier longer-lived snake, but it may also consistently yield larger clutches of bigger, healthier eggs over the years. Some bullsnake breeders will also give their females a year off in between breeding cycles, especially if the female double clutches in a year. Breeding bullsnakes is very much the same as breeding most colubrids. I tend to think of it not as a season but as a cycle that encompasses the entire year. 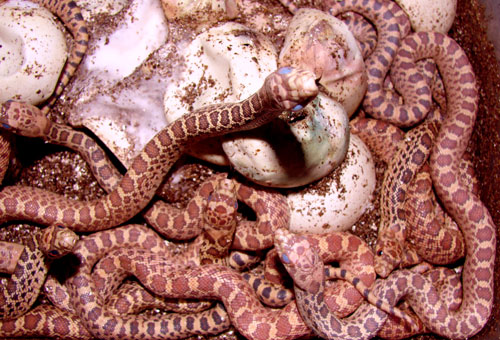 Female bullsnakes can lay anywhere from eight to 20 eggs.

I’ll begin the cycle on October 1. I first go through my breeding adults and map out the next year’s offspring that I’d like to produce. I think of the interesting and beautiful new morphs can I produce. Once I have a breeding plan in place, I prepare the adults for brumation by increasing their meal intake over the next month to two or more rats per week, depending on the snake’s size.

In the first week of November, I cut off their food supply to ensure that nothing remains in their gastrointestinal tract that could rot and kill the snake during brumation. During this time, to ensure that they don’t lose any unnecessary weight, I’ll lower the temperature to the mid 60 degrees Fahrenheit; this is cold enough for them to begin the brumation cycle but still warm enough to digest anything left in their systems.

On December 1, the lights go out and brumation begins. Wild bullsnakes hibernate in mammal burrows well below the frost line in temperatures as low as 44 degrees. They are in complete darkness throughout this period. In captivity, they are not actually hibernating, but we are staging a simulated dormant period called brumation. I wrap a veil of black fabric around the front of my rack systems to block out all light, but I leave an access point to where I can check on their water dishes and the snakes’ overall health. The temperature is reduced to 50 to 55 degrees.

To accomplish this, here in the north, it’s as simple as blocking the heating vent in the room with a fire-retardant material, such as foil-lined insulation, cracking a window and monitoring the room temperature. In the south, bullsnake breeders must hook up a special air conditioning unit to bring the temperatures down in the low 50s. Brumation lasts for 12 weeks until March 1. At that point, the temperature in the room is slowly raised over the next two weeks, and by March 15, we’re back in the upper 70s in the hot spot of the enclosure. During this time, I feed the adults twice what I would normally feed them to get their body weight back up. A couple of weeks after I bring them out of brumation, the snakes will shed. This is known as a post-brumation shed, and it’s a sign to begin pairing snakes. Do not dispose of the males’ shed. You will see why in a moment.

I always introduce the male into the female’s cage. She’s been filling her enclosure with pheromones, which will trigger the male to begin breeding.

I’ve observed three different types of breeding activity. One is the smooth method where the male will gently massage the back of the female with his belly until she signals she’s receptive and lifts her tail. The second is the aggressive method where the male will bite the back of the female’s head and pin her up against the side of the enclosure and force her tail up. And the rarest of the three is the “what am I supposed to do in here?” method where the male doesn’t take any interest in the female. This may occur with first time breeders. A simple solution is to ad one of the males’ post brumation shed in the enclosure. It’s best if it’s from a different male, but if you’re only working with a pair, the male’s own shed will work. The idea behind this is that the male will smell a rival male, and that may be all he needs to aggressively begin breeding.

Breeding can take anywhere from a few hours to a few days. Make sure to keep an eye on them, and remove the male back to his cage when they are finished. It is not essential to actually witness copulation to be sure of success. If I don’t witness the snakes locking up on the first pairing, I will separate them, offer them a meal and wait a couple of days before I reintroduce the male. Often, I will do this anyway, just to be sure of success.

After breeding, I increase the heat in the female’s cage to the low to mid 80 degrees, and will continue to feed both males and females twice what I would normally for another four weeks as the females can use the extra boost for egg production. In May to early June, roughly 60 days after breeding, the females become restless as they search for a place to lay their eggs, and will shed their “pre-egg lay shed” signaling that she will lay in about a week. At this time, breeders will include an egg box with damp sphagnum moss for them to nest in. However, I take it a step further. I remove the water dish and aspen substrate from the enclosure and replace it with a layer of damp sphagnum moss. This way, I don’t run the risk of any eggs being laid in the water dish, and because the female is free to stretch out and lay her eggs where she wants, it cuts down significantly on the possibility of the female becoming egg bound from having to cramp her whole body inside an egg box. Once the female has laid her bounty of anywhere from eight to 20 eggs. I remove the eggs immediately, otherwise the female will inadvertently crawl over them and turn them, effectively killing the embryo inside.

I incubate my eggs in shoebox-size egg boxes in an old melamine cage hooked up to a thermostat. To maintain the heat, a 60-watt light bulb turns on and off as needed.

The eggs are on a bed of vermiculite, and I add just enough water to the vermiculite to make it clump up. Too little and the eggs will not get enough humidity. Too much and the eggs may fall victim to mold. If I have to increase the humidity, I place a deli cup of water in the corner of the incubator.

I mark the lay date and the expected hatch date on note paper and periodically check them to make sure the temperature holds steady in the mid 80s and the humidity is not too wet or too dry. If the vermiculite gets dry, I spot spray a corner of the egg box with a mister, careful not to get the eggs themselves wet. The incubation period will last for 50 to 60 days or so. During this time, I continue to feed the females twice what I would normally feed to get their body weight back to normal. The males are back on their usual feeding regiment of one appropriate-sized meal per week.

In July and August, depending on when the eggs were laid, I get up every morning and eagerly check each egg box for that first little slit in the egg and that little nose peeking out. When breeding multiple hets to multiple hets, I can’t wait to see what the color morphs I’ll get. I have been known to pull up a chair and sit for hours and watch the new hatchlings crawl out of the egg.

Some breeders will “pip” the eggs, cutting a small incision or flap in the top of the egg to aid the snake in its escape. I personally do not recommend doing this. For millions of years, snakes have been able to hatch on their own without human interaction, and for inexperienced keepers, this method can be disastrous if you cut too deep or too soon. I will only use this method on snakes that are last to emerge, as that may show a sign of a complication in cutting themselves out of the egg, but that is very rare in bullsnakes.

In August, the hatching season should be complete, and now its time to care for the hatchlings. The first thing I do is sex the hatchlings and separate them into individual 3-inch-in-diameter deli cups. I use bottle tops from bottled water I drink as water dishes for baby snakes. If you do this with soda bottles, run the caps through the dishwasher without detergent before using them as water dishes.

Within a week or so after hatching, after absorbing the remaining yolk in their systems, the babies will have their first shed. Immediately following their first shed, I’ll offer them a pink mouse and then up the feeding to two pinks the following week. Once the babies are established, often simply referred to as “shed and fed,” I’ll choose my holdbacks for future breeding stock and offer the remaining for sale either online or at various shows and expos. I’m usually sold out of that year’s stock by October, and thus I begin the yearly breeding cycle again.

In the documentary Herpers, Chuck Pritzel, a foremost authority on cornsnake breeding said, “Right now there are about 120 to 150 known cornsnake morphs, and about 55,000 possible combinations.” With that I began to wonder how many known morphs of bullsnakes there were, let alone all the Pituophis genus put together. Right now, in bullsnakes alone, there are more than 40 different morphs, and as more and more hobbyists discover the attraction of bullsnakes, in five years, those numbers may double. So in that respect, are bullsnakes the new cornsnakes? Food for thought.