Scientists last week performed a necropsy on a 17-foot-7-inch Burmese python (Python molurus bivittatus) captured in the Florida Everglades in April and discovered it was carrying 87 eggs, which is a state record for the size of the snake and the number of eggs it was carrying. 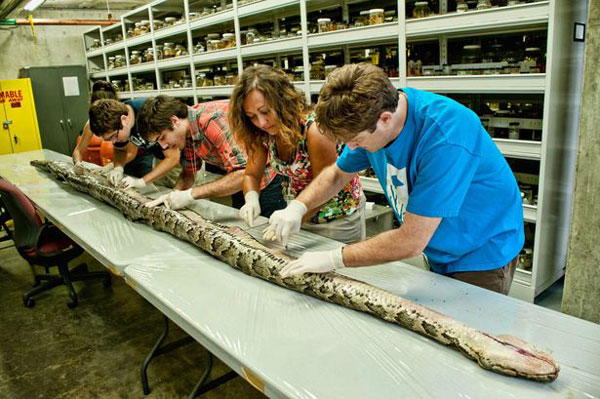 University of Florida researchers Rebecca Reichart (from left), Leroy Nunez, Nicholas Coutu, Claudia Grant and Kenneth Krysko, perform a necropsy on what is currently the longest Burmese python found in Florida. The 17-foot-7-inch Python molurus bivittatus weighed 164.5 pounds and was gravid with 87 eggs, which is a state record for this invasive species. The snake will eventually be exhibited at Everglades National Park.

According to the Invasive Species Specialist Group, Burmese pythons can lay up to 100 eggs, but the norm is between 12 and 36. The San Francisco Chronicle reports that Florida has the worst invasive reptile and amphibian species problem in the world. The Burmese python became an established species in the Florida Everglades in 2000, and some say that there are tens of thousands of these snakes in the wild in the Sunshine State. The federal government this year banned the importation and interstate transportation of the Burmese python and other large constricting snakes in an effort to prevent the spread of non-native snakes in the wild. That ban became effective March 23, 2012.

The Burmese python is one of the largest snakes in the world and is native to Southeast Asia. It can grow up to 20 feet and reach a weight of more than 350 pounds, though most top out around 13 to 14 feet and weigh around 130 pounds. Captive bred specimens have a mostly docile disposition, so much so that they are often called the gentle giants of the large constricting snakes.