A. The Dumeril's ground boa (Acrantophis dumerili) is usually considered the easiest of the three Madagascar endemic boas to keep and breed. If you find a good male mate, you have a very good chance of breeding your female. 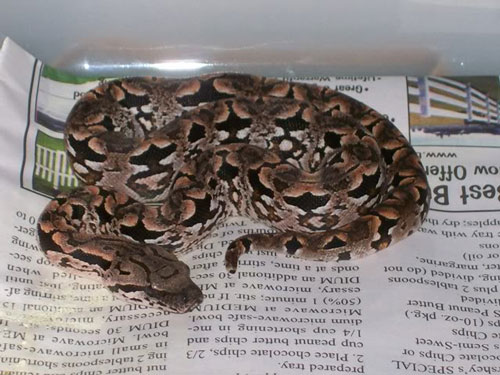 Dumeril's ground boas breed most successfully when both male and female are at least 4 and preferably 5 years old.

Dumeril's ground boas are believed to reach sexual maturity at about 18 months of age in Madagascar. This species appears to breed most successfully when both male and female are at least 4 and preferably 5 years old. At this age, a well-fed female would be perhaps 5 to 6 feet long – so your female is doing well. I'd give her another year, and she should be in prime breeding condition.

Never force sexual maturity on a snake by heavy feedings or continually high temperatures — such efforts usually end up with an unhealthy snake or at least one that will not breed successfully. Be sure to provide a good temperature range (about 82 degrees with a warmer basking area, under a light, and with the temperature dropping a bit at night) and provide sufficient water for regular soaking. Your terrarium sounds fine. Feed your Dumeril's ground boa properly sized mice and rats once a week, but don't try to make the snake too fat. Keep these parameters in mind, and nature will do the rest.

Dumeril's ground boas can be sexed by probing (males probe to 10 to 12 subcaudals, over one-third the length of the short tail) or by looking for the cloacal spurs. In this species of boa, only the male has distinct spurs on either side of the vent. Otherwise the sexes are almost identical.

In nature, male Dumeril's ground boas go through a period of ritualistic fighting, raising their anterior bodies and coiling about each other, sometimes biting. The first captive breeders recommended using two males to one female so fighting would occur. However, this does not appear to be necessary, especially as most dumerili sold are captive bred and a bit removed from natural behaviors. Also, Dumeril's ground boas have always been expensive snakes, and occasional accidents could result in serious damage to one or both males.

Breeders keep dumerili pairs together all year in very large terrariums and subject them to limited cooling periods in the autumn or early winter. The temperature is dropped by about 10 degrees and the hours of daylight are reduced to six to eight hours. Food is reduced but still provided, and water is always available. This regimen is continued for up to two months, with breeding starting as soon as the temperatures return to normal and feeding is increased. Some Dumeril's ground boas react poorly to this continued low temperature schedule and may become ill. Some breeders modify the cooling period a bit by only dropping the nighttime temperature to 72 degrees and keeping the daytime temperature at the normal 82 degrees or so. A basking light is also used daily.

Soon after a successful mating, an egg bulge will appear in the female's lower abdomen. A gravid female Dumeril's ground boa must continue to bask, preferably with overhead heat and not a heating pad, if she is to remain healthy and have healthy young.

Six to 12 (rarely up to 15) baby Dumeril's ground boas roughly 16 to 19 inches long are delivered about five to seven months after mating. The babies usually start feeding as soon as they molt, taking mice and rat pups. Though the parents may be beautifully colored and patterned, the babies are even more striking. They grow quickly and can mature sexually in less than two years. With luck and good husbandry, your dumerili could live for a quarter century, so it really doesn't hurt to wait two or three more years to perform its first mating.

Though widely available, there still is something of a legal question about Dumeril's ground boas. They have been almost impossible to export legally from Madagascar for sometime now. And they are losing their habitat in Madagascar at a rapid rate. It is likely that most of the young offered for sale today in the United States were bred from parents or grandparents that arrived here illegally or at least under questionable circumstances, though there have been zoo colonies for many years. It does not appear the government is too interested in looking closely at the ancestry and legality of these boas, so there is a good chance that they will survive longer in the terrarium than they will in nature.