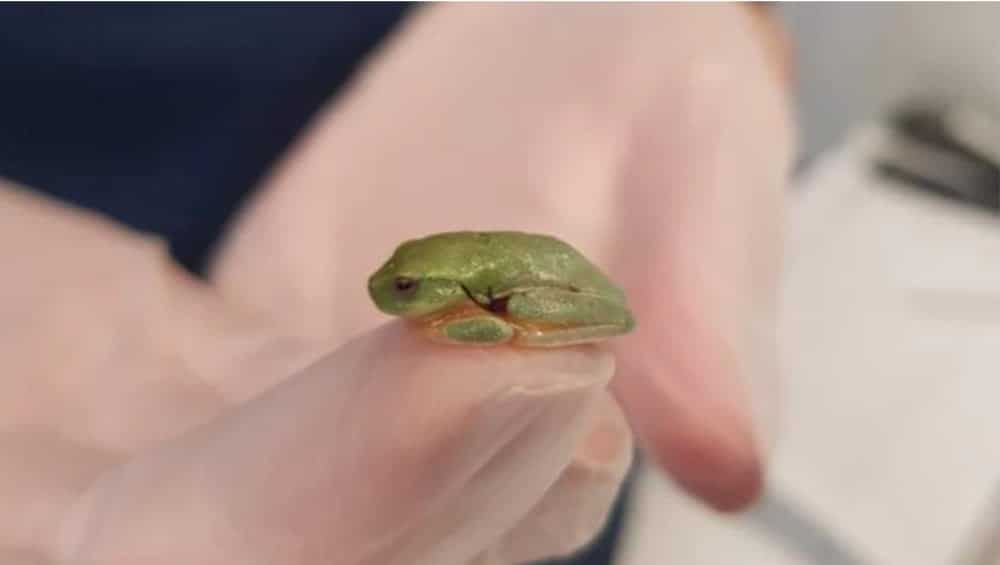 A veterinarian in Australia performed a successful surgery on a green tree frog that had a hole in its chest. Brisbane veterinarian Dr. Meaghan Barrow

A veterinarian in Australia performed a successful surgery on a green tree frog that had a hole in its chest. Brisbane veterinarian Dr. Meaghan Barrow told ABC Radio Brisbane that the little amphibian, which measured less than 2 cm in length and weighted less than half a gram, was the smallest animal she had ever performed surgery on.

“This graceful tree frog is less than two centimeters long and less than half a gram in weight, she said. “So a tiny, tiny frog. He could fit on the end of my finger.”

A vet nurse brought the frog into the RSPCA clinic after finding him on some leaves brought in to feed the koalas. She though the little frog had a lump on the side of its body, but that lump was actually a hole in its chest, which for such a tiny animal, could be deadly.

“I had a close look and he actually had a little hole, it was only a couple of millimetres but on a tiny frog that’s only two centimetres long, that’s quite a big hole inside of his chest. The animal’s tiny lung and intestines were poking out of a small hole in its thorax, Barrow said.

Barrow went to work on the tiny amphibian. First she had to sedate the frog, diluting the medication by one in 1,000 to put it to sleep.

“We just had to use very tiny instruments, tiny needle and suture materials to pick him up.”

The most difficult part was to steady her hands to suture the frog successfully. Barrow was able to sew the hole with a single dissolvable suture and after a day, the frog’s color was back and it was hopping about. The frog was fed a diet of tiny mealworms to get his strength back, was given pain medication and after a week, was released back into the wild.