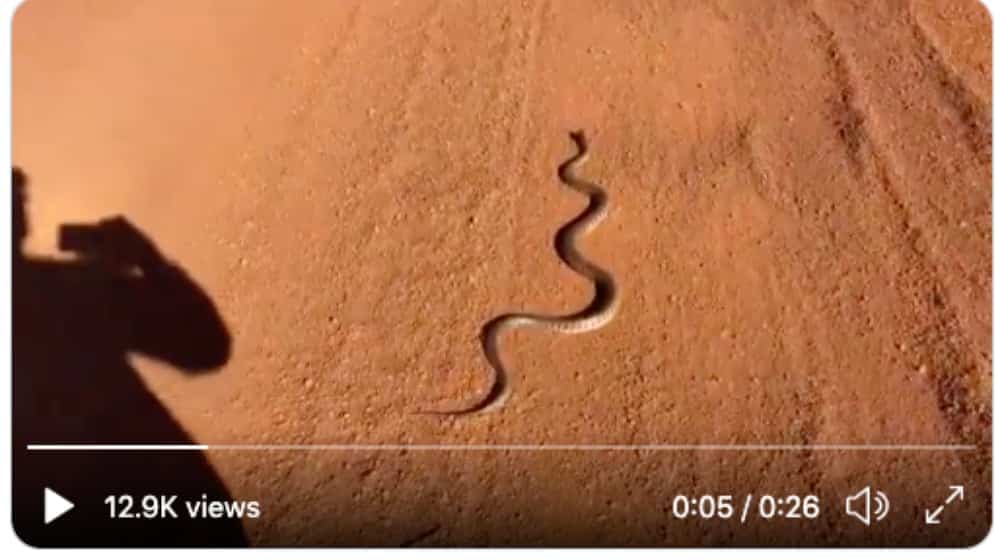 Aussie Trucker Pulls Over To Move Python Off The Road

A truck driver in the Northern Territories of Australia happened upon a black-headed python (Aspidites melanocephalus) that was cruising up the middle of a dirt road, not even trying to cross it. So the truck driver, whose twitter handle is BoutaNT (with 10k followers) did what any animal lover would do. He helped the “little bugger” off the road and into the bush.

“You’re in the way bruddah,” Come up. Let’s go Let’s go,” BoutaNT says as he grabs the snake by the tail and carries it to the side of the road. “Relax relax relax bruddah, you’re up you’re up. There you go,” he said as the snake, thrashing a bit about is then gently released out of harm’s way. BoutaNT then walks toward his truck and the video ends.

Tweets about the save ran the gamut, from “That’s a nope rope,” to “Saved it from being road kill,” to “I just looked up information on pythons. Now I am prolly going to have FB ads for pet snakes. LOL!”

Good on ya, sir BoutaNT. We seppos appreciate the hard work you did all the way across the Pacific pond!

This little bastard was just cruising up the middle of the road. Not even trying to cross it. pic.twitter.com/bHV6Qpjd1f

A beautiful snake, the black head is so name because their head looks as if it has been dipped in black ink, while the rest of the body is generally free of any black colorations. The grow to between five and 10 feet in length and can live 20 to 30 years. They are also widely captive bred.