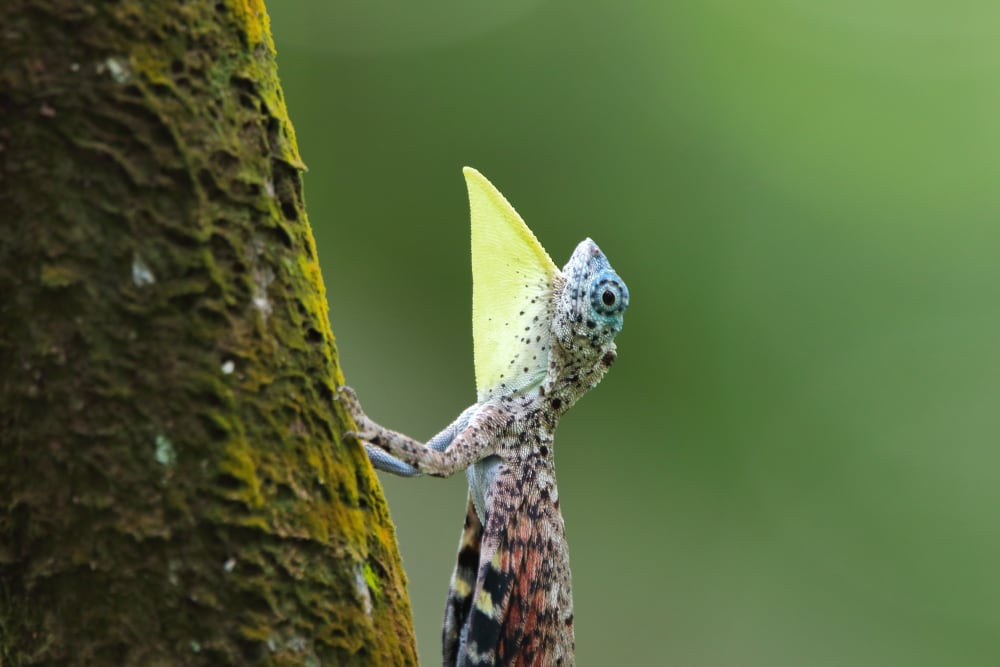 Two different lizard species, the Anolis lizards of the Caribbean and the Draco lizards of Southeast Asia learned the same skills in spite of being to

Two different lizard species, the Anolis lizards of the Caribbean and the Draco lizards of Southeast Asia learned the same skills in spite of being totally different species on the opposite sides of the earth, according to researchers with the University of New South Wales. Both lizard species, the study says, solved a challenge in communicating with their own species when defending territories as well as finding a suitable mate.

The males in both species perform head bobs and push up displays in an effort to ward off rivals as well as attract females, displaying their colorful throat fan, or dewlap. These two species also live in the same range of rainforest and grassland habitats albeit on the opposite sides of the earth, yet have evolved to communicate in the same fashion.

“The surprise is that lizards in both groups have evolved remarkably similar displays for communication, but they also tailor the production of those displays according to the prevailing conditions experienced at the time of display,” lead author Dr. Terry Ord of the Evolution & Ecology Research Centre at the UNSW School of Biological, Earth and Environmental Sciences, said in a press release put out by the university.

“That is, increasing the speed or the length of time they spend displaying the movements as the viewing conditions deteriorate. Really there should be essentially innumerable ways these lizards could have adapted their displays to remain effective, and there is strong evolutionary predictions that would lead us to expect this as well.”
The displays of these non-related lizards from opposite sides of the earth shows “natural selection directs evolution towards the same common set of adaptive outcomes over and over again.”

“So, the longer species have evolved independently of each other, the less likely they would evolve the same adaptive solutions if they were exposed to the same change in the environment,” Ord said. “So if arm-waving is the most effective solution to some change in the environment, then natural selection would ultimately lead to its evolution rather than a more subtle (less effective) modification to an existing vocal call,” he says.

“Evolutionary biologists are excited about convergent evolution because it gives us multiple examples of the same adaptation evolving time and time again in very different animals. So it tells us what the challenges are faced by these animals and how they have solved it in terms of evolutionary adaptation.”

An abstract of the study, “Deep-time convergent evolution in animal communication presented by shared adaptations for coping with noise in lizards and other animals” can be read on the Ecology Letters website.