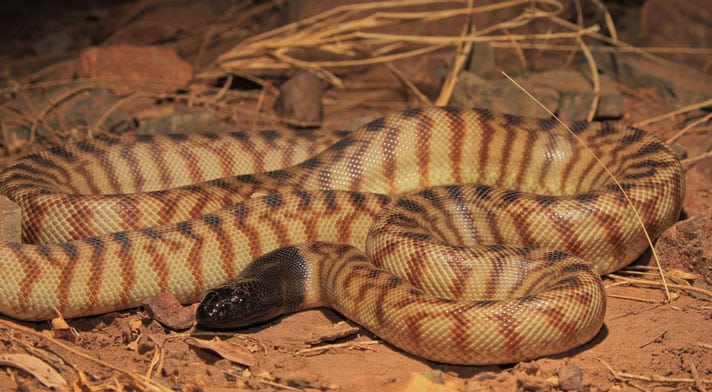 Black-headed pythons have a reduced head and strengthened rostral region that makes it well suited for burrowing and capturing prey.

They almost appear to have been dipped in black ink. The black-headed python’s head and jaws are long, with the head not much wider than the neck. The eyes are black, and the scalation is smooth and glossy.

There may also be small blotches between the stripes along the sides of some specimens. The venter can range from white to pink, but can also exhibit dark spots similar those along the dorsum. Coloration of black-headed pythons can vary extensively depending on age and geographic location. For example, Western Australian specimens are much lighter with reddish overtones than those found in the Northern Territory and Queensland, which have darker, more intense striping patterns. Furthermore, older specimens tend to be paler with less distinctive markings.

Black-headed pythons are more available now than in past years. They are not the easiest snake to breed. Their availability depends on luck of breeders. I do not breed my females every year. If they successfully breed three years in a row, I give them a year off to recover. It is important to get black headed pythons from breeders who can provide feed records and photos of the parents. These snakes fall under the category ‘’you get what you pay for.’’ Good quality animals will not be cheap, and if they are, I would be leery. I would rather spend time with a potential buyer, explaining the reptile supplies and care they need to have to house their new addition, then have someone buy a baby and have something happen to it. It is always best to prioritize reptile health and wellness over cheaper animals.

Adult black-headed pythons range from 5 to 10 feet long. My animals range in length from 6 to 8 feet, with the males generally being smaller than the females by a foot.

Black-headed pythons can live 20 to 30 years.

The average age that I breed black-headed pythons is around 4 years old. Although I have bred males at 2.5 years. I recommend waiting for the best chances of success. From our own observations, as the snakes grow larger in size, the clutch sizes they produce become larger as well. This does not mean, however, that animals should be overfed to attain larger sizes faster. Overfeeding will cause health problems and a shorter life span.

I breed our black-headed pythons in the same enclosure one of them normally lives in; we’ve had success placing the female with the male in his enclosure as well as vice versa. Habitats are 6 feet long, 2 feet tall and 3 feet wide. One side has a 13-inch heat strip that provides a hotspot of 95 degrees Fahrenheit. The rest of the cage has an ambient temperature between 78 and 80 degrees.

Black-headed pythons are best kept in a larger reptile habitats. I use Freedom breeder racks and Vision cages. Large hide (nesting) boxes measuring 14 inches long, 20 inches wide and 12 inches tall are provided for both males and females.  I use a 50/50 mixture of moist Zoo Med Eco Earth Coconut Substrate as reptile bedding and sand in these boxes as snake bedding. Reptile hides are placed on both the warm and cool sides of the cage. Having the hide boxes keeps the snakes content, and the moist substrate aids in shedding. The hide box is placed on the hotspot.

You can have a very simple cage set up or a very decorative one with snake habitat products. This is a personal preference, as long as you provide the proper minimum enclosure size. Hatchlings can be housed in a small enclosure, with the appropriate water and hide-box offered.  I highly recommend NOT housing animals together unless breeding; Black-headed pythons do have cannibalistic tendencies.

Black-headed pythons like to be warm. I keep their hot side around 95 degrees Fahrenheit which can be provided with heat tape or a Zilla  reptile heat pad with a thermostat controller. The cool side 82 degrees. My snake room stays 80 degrees. With that in mind, controlling your temperature depends on the room you are keeping them. You can use a basking light 8 hours a day on half of the enclosure. I use coconut bark, which give me the ability to mist for humidity. Plus I have a wet box.

I use coconut bark chips or aspen for snake bedding, such as Exo Terra Coco Husk Substrate and Zoo Med Aspen. The benefit of coconut bark is the capability to mist the bedding to bump up the humidity if need be.

I feed male black-headed pythons two small to medium rats every 10 days. Female black-headed pythons are fed three to four small to medium rats every 10 days. I feed only thawed-frozen food, because it is safer for the keeper and the snake. Being a captive snake, I noticed a difference in temperament when feeding live food verse F/T or pre killed. Black-headed pythons are aggressive eaters. I place their food on a paper plate. Placed on the opposite end of the cage where the snake is. And leave them alone to eat in peace. Otherwise they will get nerves and/or protective of there food. I always feed them in their cage. I do not want any snakes I am handling to think they could get food while out of their home.

Drinking bowls just large enough for them to drink from, but not big enough to soak in, are provided. Black-headed pythons love to be misted. They will even lift their heads to lick the water.

Black-headed pythons are different than other snakes I own and breed. All my snakes are hook trained. Which means I NEVER open the cage door and put my hand in. I use a hook to rub their head, then hook them out. Since I only feed in their cage, the hook makes them aware to what I am going to do. When I feed, I never touch them. The hook rub on the head means Play Time! When in shed, I try not to handle them too much. Some are better than others, but with a coating over their eyes, they tend to be quiet. When threatened, black-headed pythons may strike with their mouth closed.

Around October my black-headed pythons tend to slow down quite a bit. After speaking with other breeders working with this wonderful snake species, and depending on where they are located, they breed their black-headed pythons up to two or three months earlier than I breed mine because of climate differences. This is something to be kept in mind when cycling these snakes. I stop feeding my black-headed pythons around the middle of November. I keep them heated at the previously mentioned temperatures (95 degrees at the hot end of the enclosure; 80 at the cooler end) to completely clean out their digestive tracts. It’s very important to do this, as not doing so can cause digestive problems.

Three weeks after the snakes have eaten their last meal, I cool the snakes down to 68 to 70 degrees at night and turn off the heating strips. I still allow the room temperature to rise to 78 to 80 degrees for a 10-hour daytime period, and the hotspot remains at 95 degrees during the day.

After three weeks of cooler night temperatures, I introduce the male to the female. I continue to lower the temperature at night. I have bred different males with a single female as well as one male with a female, and have achieved the same results. Sometimes a male is not interested in a female. If this happens, he is removed and replaced with another male.

A male black-headed python shows interest in a female by crawling along her back and tickling her back with his spurs. A female shows interest by being receptive to the male’s advances. This behavior generally means that copulation will soon take place.

The black-headed pythons are kept together until ovulation has taken place. Although there is no reliable way to tell if ovulation has occurred, a good rule of thumb is to remove the male when he no longer shows interest in the female. If successful ovulation occurs, eggs will be laid around 60 days later.

Female black-headed pythons usually lay six to 20 eggs approximately 30 days after a post-ovulation shed. Do not remove the eggs until you’re sure she has finished laying all of them. When removing the eggs to the incubator, don’t rotate them. Keep the egg orientation the same.

I incubate in a plastic sweater box container with holes on the sides. I use batting for substrate (this is the same material you would use for quilting), with plastic grates cut to fit in the sweater box. Eggs are place on top of the plastic squares. This allows me to control the humidity in the box verse controlling the humidity in the whole incubator. Humidity is maintained at 70 to 80 percent. I check eggs daily for moisture on the inside of the box lid and wipe it away if found so that it does not drip on the eggs. Successful incubation will conclude with black-headed python eggs pipping in 58 to 65 days.

Black-headed python eggs that come in contact with moisture will go bad within a few days. Although they need humidity, direct contact with damp substrate will cause mold. This is one of the most important and challenging things about breeding black-head pythons.

Jessica Gorges Johnson brought her first snake home at age 17. Her mother was not very pleased, but she let her keep it. For the past 15 + yrs, Gorges Johnson has kept a variety of snake and other reptiles. She has been breeding black-headed pythons and Womas for more than 10 years.