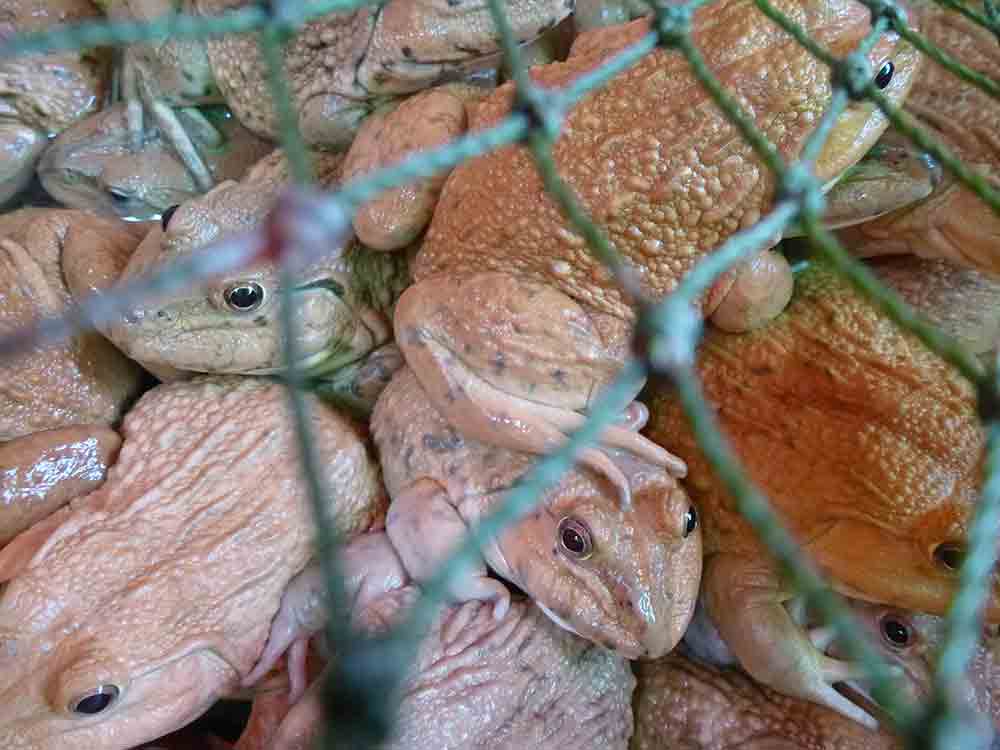 In the United States, frogs are farm raised especially for the EU trade. Photo by Christian Nuebling/Shutterstock

The European Union imports more than 4,000 tons of frog legs every year for human consumption.

The European Union imports more than 4,000 tons of frog legs every year for human consumption, and this is leading to threats to native species in Indonesia, Turkey and Albania, the German non-profit organization Pro Wildlife said in a news release

According to Pro Wildlife, an estimated 81 million to 200 million frogs are imported into the EU, making the EU the largest importer of frog legs. The majority of these amphibians are wild caught, the group said.

“In the 1980s, India and Bangladesh initially delivered frog legs to Europe, Indonesia has been the largest supplier since the 1990s. In the Southeast Asian country, as now even in Turkey and Albania, the big frog species are disappearing one after the other – the whole thing is a fatal domino effect for species protection,” Dr. Sandra Altherr, co-founder of the Munich organization Pro Wildlife said.

“Frogs have a central role in the ecosystem as insect killers – and where frogs disappear, the use of toxic pesticides is growing. The frog leg trade therefore has not only direct consequences for the frogs themselves, but for nature conservation,” Charlotte Nithart, President of the French organization Robin des Bois, said in the statement.

Peruvians Drinking Away Existence Of The Endangered Titicaca Water Frog

According to the Pro Wildlife study “Deadly Dish” that collated EU frog leg import data from 2010-2019, more than 30 million kg of frogs were taken from the wild in Indonesia alone.

The Java frog, (Limnonectes macrodon), a once abundant species that was widely captured and sent to the EU food trade, has disappeared from the market. Pro Wildlife also asserts that frogs sold in European supermarkets as Java frogs are in fact, not Java frogs.

The group says that the Skutari water frog (Pelophylax shqipericus), native to Albania, is also at high risk of disappearing in the wild. As with the Java frog, these frogs are taken and their legs separated from the body for export, with the rest of the amphibian discarded.

In the United States, frogs are farm raised, and are popular in the South of the country, the group noted. About 74 percent of EU imports are from Indonesia, 4 percent from Turkey and 0.7 percent from Albania.

The complete report, Deadly Dish, can be read on the Pro Wildlife website.