Chuckwallas (Sauromalus ater) resemble Gila monsters (Heloderma suspectum) in appearance, although to what degree depends largely on your prior exposure to seeing both in real life.

Question: I’m a lizard fanatic, who’s rolling with laughter at a supposed fact told to me about people in Arizona mistaking chuckwallas for Gila monsters. I find that to be completely ludicrous. They look nothing alike! You spend a lot of time in Arizona, so I’m asking the Horse’s Mouth. Have you ever heard of such a thing?

Answer: I think you may be too close to the subjects in question if you can’t see what average people would say is a resemblance. That’s not a bad thing. It shows you really love lizards and devote special attention to them—far beyond the little to zero interest John Q. Public has in them. To understand the issue—and yes, people do confuse the two saurians—it’s necessary to stand back and look at the bigger picture behind why non-herpers even bother to try to make the distinction. 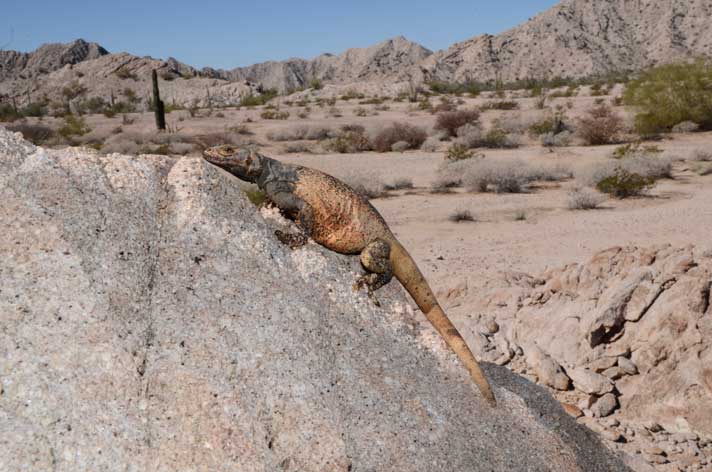 Chuckwallas (Sauromalus ater) resemble Gila monsters (Heloderma suspectum) in appearance, although to what degree depends largely on your prior exposure to seeing both in real life.

The majority of the public has only one concern with lizards: Will they hurt me? Small, fast-moving types like those in the genera Sceloporus, Urosaurus, Aspidoscelis, Uta, etc., are generally recognized as harmless little sidewalk lizards to most people. But anything above about 6 inches in length, particularly if it’s thick and moves slowly, is instant suspect. The main reason is because nearly everyone in the southwestern United States has heard about Gila monsters (Heloderma suspectum) and the fact that they’re venomous, and thus dangerous to humans. It doesn’t matter if they’ve ever seen one alive in nature—relatively few people have; fat, ‘ugly’ lizards are to be avoided at all costs just in case. 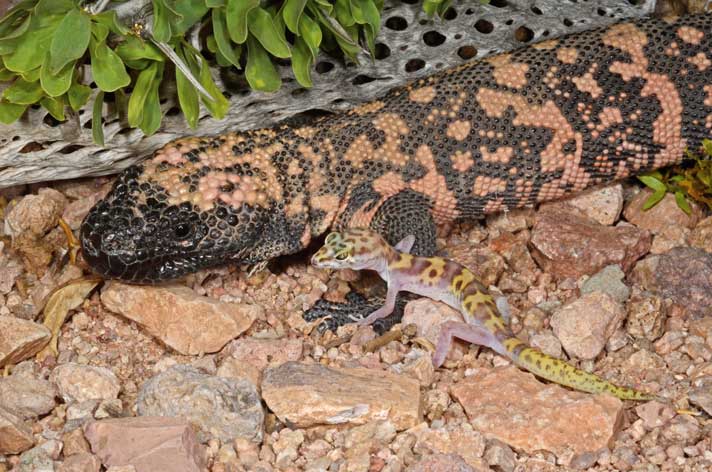 When addressing the public, I long ago stopped feeling silly pointing out that the Gila monster (Heloderma suspectum) is the larger of the two lizards shown together below. The small one is an adult banded gecko (Coleonyx variegatus).

All that considered, you must admit that, at least superficially, chuckwallas actually are fat, ‘ugly’ lizards, and they measure and weigh in at roughly the same stats as Gila monsters. They inhabit the same regions in Arizona, and often sport the same colors, more or less. I have no trouble envisioning how folks mix them up when one shows up in their yard.

You’ll probably be utterly shocked to know that another native lizard is just as often mistaken for a Gila monster with frequency in Arizona. Banded geckos (Coleonyx variegatus), believe it or not, result in as many or more rescues/removals to groups who respond to residents’ distress calls. Typically, an adult gecko is spotted behind clutter in garages or hiding under yard debris and automatically assumed to be a baby Gila monster. I was admittedly incredulous about that upon first hearing it, but I can view the likeness through amateur eyes and readily believe it now.