About 150,000 people visit the Galápagos Islands  every year and 25,000 – 30,000 live there. Now it has emerged that both land and marine iguanas as well as giant tortoises living close to tourist sites or human settlements on the islands are more likely to harbor antibiotic-resistant bacteria than those living in more remote or protected sites there, according to a new study. 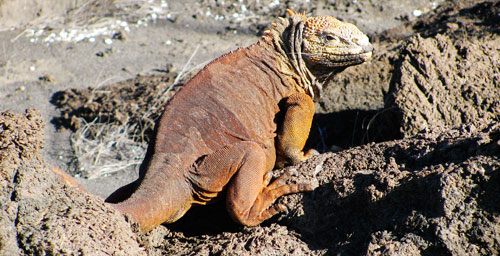 Iguanas such as this lizard on Isla Fernandina live in remote locations with no human contact and are unlikely to carry resistance genes.

Feces collected at several different locations from free-living reptiles harbored Escherichia coli bacteria that were resistant to ampicillin, doxycycline, tetracycline, and trimethoprin/sulfamethoxazole. However, another bacterial species collected from the feces, Salmonella enterica, was found to be only mildly resistant or not resistant at all to the same antibiotics. The scientists believe that the difference is most likely to be the result of the differing ecology of these two bacterial species in the gut.

Supported by other research

This is not the first study to find that wild animals living near humans or affected by tourism can obtain antibiotic-resistant bacteria from that exposure, explained University of Illinois animal sciences professor Roderick Mackie who led the study. But it does offer researchers and wildlife managers a way to determine which vulnerable animal species are most at risk of exposure to human pathogens.

"Oceanic island systems such as the Galápagos archipelago are ideal for studying patterns and processes of ecology and evolution, such as antibiotic resistance," Mackie said. "Although the data are interesting, we don't have enough information to identify the likely source of antibiotic exposure and origin of the resistance genes, or to draw conclusions about transmission direction."

Also, according to the researchers, it is not yet clear "to what extent this potential exposure translates to ongoing exchange of bacterial strains or bacterial traits". Further studies are needed "to understand better how human associations influence disease risk in endemic Galápagos wildlife."  Clearly though, in an environment where such rare species with a very restricted distribution are to be found, this is potentially a serious cause for concern.