An injured amphibian that climbed into a burrow of a forerunner to mammals more than 250 million years ago was recently discovered in South Africa's Karoo Basin, probable victims of a flash flood that buried them together. Scientists made the discovery using Synchrotron imaging, technology that enabled the scientists to look into the burrow and see the contents without destroying it. 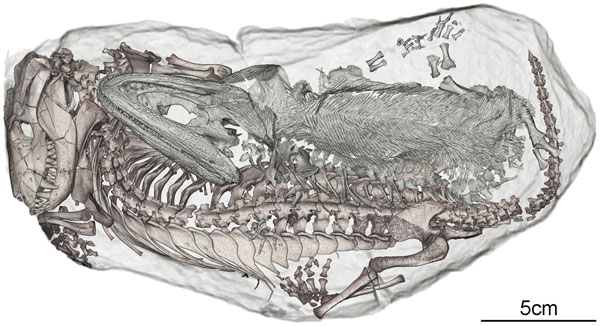 The amphibian Broomistega co-habitating with the mammal forerunner Thrinaxodon.

The imaging device showed in great detail the remains of the two vertebrate animals together after becoming trapped in a flash flood event. The animals were the amphibian Broomistega (of the extinct group Temnospondyl) and the mammal forerunner Thrinaxodon. The imaging showed that the amphibian had broken ribs that were healing, and the scientists speculate that it crawled into the burrow of the sleeping Thrinaxodon for protection.

According to a statement put out by Wits University, this type of imaging enables the study of fossilized burrows that have been discovered in the Karoo Basin. This was the first attempt in using the imaging device to determine what was in one of the burrows and the scientists essentially got a "twofer" with the imaging showing the world's first association of two animals that are not related.

"While discovering the results we were amazed by the quality of the images,” lead author Fernandez said in the statement, "but the real excitement came when we discovered a second set of teeth completely different from that of the mammal-like reptile. It was really something else.”

These animals lived in a time during the recovery from the mass extinction event at the end of the Permian area, a fairly hostile environment with climatic warming and monsoons. As a result, many animals learned to dig burrows to seek shelter, the scientists said.

In trying to determine why there was burrow sharing between different species, the scientists looked at modern day burrow sharing habits with non related species, but couldn't determine a relation with what they discovered in the fossilized burrow. They tested various scenarios, including a predator-prey interaction but upon inspection of both fossils they were unable to find any tooth marks or other evidence that showed predation. This relationship will most likely be the subject of a future study.