Leatherback Sea Turtles Get Sanctuary On The U.S. West Coast

The leatherback sea turtle (Dermochelys coriacea), one of the most endangered sea turtles on the IUCN Red List (critically endangered with an estimated 2,000 to 5,700 nesting females worldwide) has found sanctuary on the west coast of the United States, as federal regulators have designated approximately 42,000 square miles of ocean area along and 200 miles off the coasts of California, Oregon and Washington, as protected habitat for the sea turtle, according to a report in SFGate. This area marks the first sanctuary for the turtle in the continental United States. 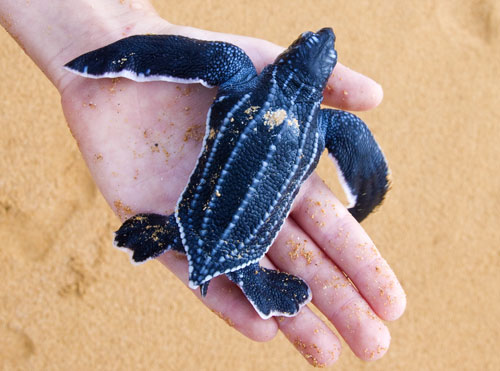 According to the report, the regulations restrict any projects that cause harm to turtles or jellyfish, of which the turtle dines on and travels 6,000 miles every year to consume outside the Golden Gate Bridge. Pollution, agricultural effluent, oil spills, power plants, oil drilling, storm water runoff, and liquid natural gas projects that occur along the California coasts (Santa Barbara and Mendocino counties), as well as those activities along the Oregon and Washington coasts will all be reviewed and regulated under the new law. In addition, any aquaculture and desalination projects will come under scrutiny as well as any energy generating endeavors that involve tidal, wave turbine, and nuclear practices. The regulations were the result of a lawsuit filed in 2009 by the non-profit environmental groups Turtle Island Restoration Network, the Center for Biological Diversity, and Oceana, which accused the government of failing to protect the sea turtles from such activities as gill-net and longline fishing, oil drilling, wave energy projects.

The leatherback turtle is the largest marine reptile. It can grow between 5 and 8 feet and weigh up to 2,000 pounds, according to the U.S. Fish and Wildlife Service. It also dives the deepest and has the farthest migration than any other sea turtle. It feeds primarily on jellyfish, but also eats crustaceans, sea urchins, squid, fish, tunicates, blue-green algae, and floating seaweed. It is believed the leatherback sea turtle reaches sexual maturity at 6 to 10 years old and live up to 40 to 100 years old.