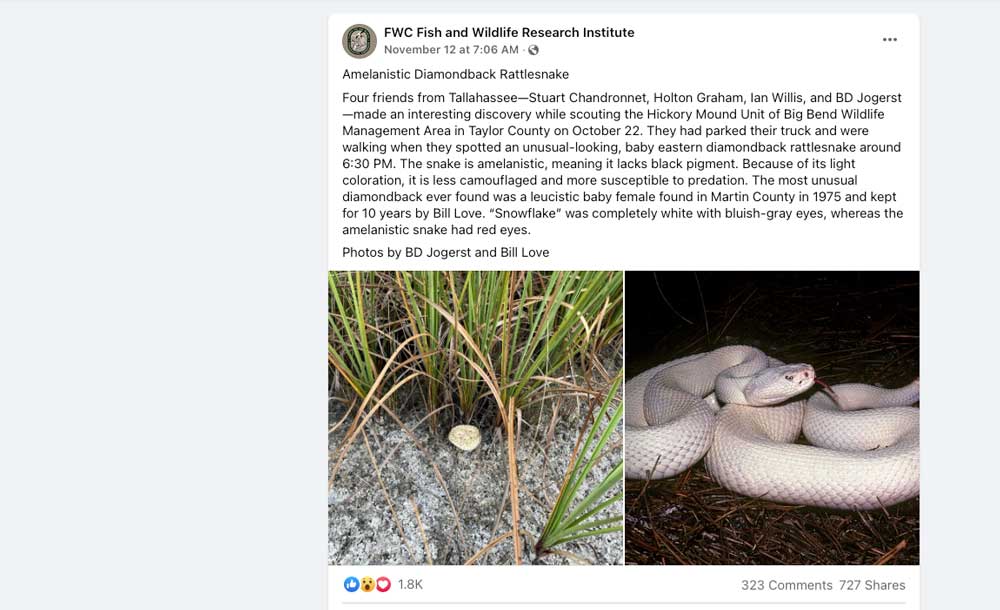 The venomous snake is just a baby, which is when amelanistic and leucistic reptiles are most often seen in the wild.

A baby Eastern diamondback rattlesnake (Crotalus adamanteus) that lacks black pigment was photographed in the wild at the Big Bend Wildlife Management Area in Taylor County, FL by BD Jogerst. Jogerst was out with three other friends in the area when they came across the amelanistic venomous snake coiled by some reeds. Jogerst photographed the snake last month when the group of friends were out walking.

The Florida FWC Fish and Wildlife Research Institute posted the photo on its Facebook page, alongside Snowflake, a leucistic baby female that was found in 1975 and kept for 10 years by Bill Love, former Herp Queries column writer for REPTILES magazine.

Amelanistic Rattlesnakes In the Wild

An amelanistic rattlesnake in the wild have more challenges than normal colored animals in that they tend to stick out more, and are more susceptible to predation. On the other hand, captive bred amelanistic animals are sometimes more highly sought after than their normal, genetically identical brethren. Whereas a normal ball python may sell for $60, a leucistic ball python might sell for $300.

In September 2020, a patternless eastern diamondback rattlesnake (Crotalus adamanteus) has been documented by Florida Fish and Wildlife Biologist Pierson Hill. Hill captured the snake and microchipped it before releasing it bacon to the wild. Florida FWC said the color morph is very rare with only a handful being documented by biologists. At the time of the finding, Hill said the patternless trait is heritable as such snakes have been documented several times in the population in which Hill was studying.

The eastern diamondback rattlesnake is the biggest venomous snake in the Americas, with recorded lengths nearing eight feet and weights in excess of 35 pounds. The eastern diamondback has massive fangs that can approach a full inch long and can pump as much as 450 mg of venom (less than 150 mg can kill a human) in a single bite. They are known to inhabit pine forests, mountains, and dry marsh and coastal areas of Florida as well as the lower southeastern United States.