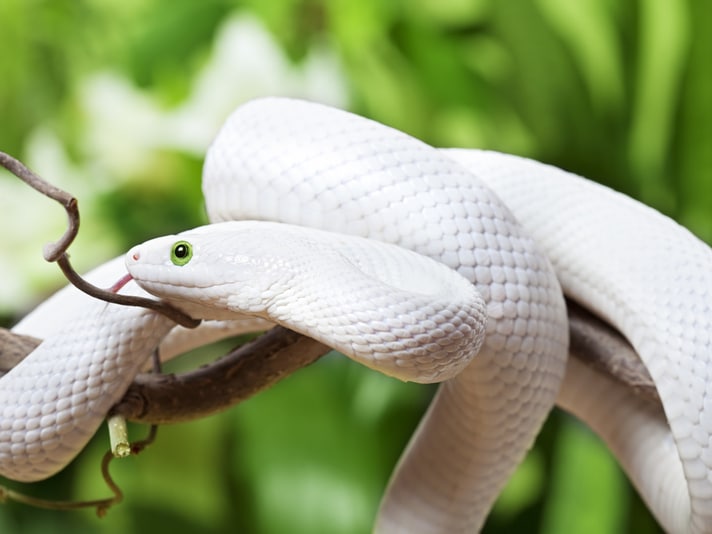 Question: Can you discuss the appeal of whiteness in herps? Fiona Maple, Sioux City, IowaAnswer: In my late teens and twenties, 40-ish

Question: Can you discuss the appeal of whiteness in herps?
Fiona Maple, Sioux City, Iowa

Answer: In my late teens and twenties, 40-ish years ago, herpetoculture was still in its infancy. Just acquiring any cool, new, normal herp and keeping it alive for a year or more was noteworthy. To find a specimen that was obviously abnormal, like an amelanistic lacking all black pigment (or to have such a creature born or hatched) was truly brag-worthy news. The old figure I read somewhere decades ago estimated such a discovery or birth to be a one in a 100,000 event. That was pretty rare stuff back in the day!

Everyone knows the survival rate for oddly colored animals in the wild is less than for normal pigmented specimens. Non-pigmented animals that “glow” white, unless they live in caves, are especially vulnerable and seldom live past their first few months of life in nature. It should come as no surprise, then, that virtually all “white” herps are found as juveniles, a fact that’s one of the four reasons behind their prevalence in the trade today.

Mutant wildlife that’s essentially all-white (lacking melanin) has caught people’s fancy for millennia. White is synonymous with purity in many cultures, and it symbolizes strength and health in others. Something that’s white stands out to humans.

Whiteness also denotes rarity in animals, and thus desirability. This is probably related to our own wish to stand out from the crowd as individuals—a phenomenon I believe is running rampant in today’s climate of excessive human population growth. By possessing something rare, we hope it makes us special. But are white herps really more beautiful than their normal counterparts? Sometimes it’s hard to make the distinction between beauty and simply being starkly different.

Some amelanistic herps have a huge advantage over most mammals in the normal-colored versus albino comparison. Many herps have yellow and red skin pigments besides just black (melanin), and if you genetically wash away the black, a startlingly colorful creature is sometimes revealed. In such cases, the appeal of the brilliant, brightly colored version of the animal is immediately obvious.

A third, very modern reason also results in us cherishing aberrant herps that stand out from their naturally pigmented brethren: such animals can be readily differentiated from wild-collected stock. This is especially important during these days of growing awareness of the pressures placed on wild herp populations by the pet industry. Aberrant types have claimed an increasingly larger share of the market for decades. Reptile breeders should be pleased, as this indisputable evidence that their animals are captive bred is prevalent at shows and stands in the face of wildlife authorities who are often recalcitrant when it comes to abandoning outdated beliefs to admit that an increasing percentage of pet herps are captive bred and not collected from the wild.

Lastly, starting with a “clean slate” while setting up a captive-breeding program by subtracting the black coloration that would otherwise overlay lighter colors allows reptile breeders to selectively breed toward what pleases them visually. I have always credited the first amelanistic corn snakes (Pantherophis guttatus) that reached the mass market with spearheading the herpetocultural revolution in the 1970s. Their vivid colors grabbed people’s imagination, and the fact that breeders could repeat their success launched a demand for similarly “de-pigmented” herps that continues to this day.
Over the past 40 years, it seems as if virtually every reptile and amphibian species has turned up in one or more forms, including amelanism. White herps are no longer the novelty of yesteryear, back when every new type was instantly in high demand. Breeders today pick and choose more carefully before investing the megabucks and years needed for a project, and profit usually plays into the bottom line.