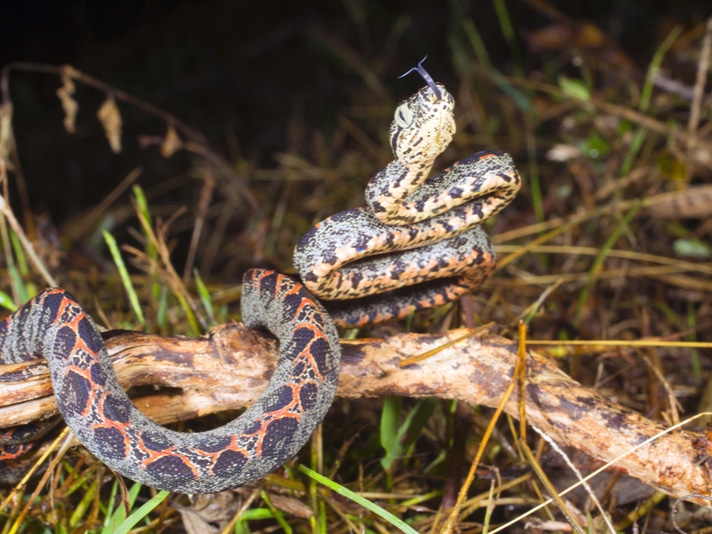 The Amazon tree boa (Corallus hortulanus) is the most geographically widespread of the tree boas.

The Amazon tree boa (Corallus hortulanus) is the most geographically widespread of the tree boas. It is found from northern South America throughout the Amazon Basin east of the Andes. Along with its wide distribution, it also varies widely in color and pattern. Natural color forms range from deep brown or black to bright yellow and red. Most individuals show some form of dorsal pattern, normally appearing as dark hourglass markings across the body. Occasionally uniform-colored snakes without any pattern are seen.

As their name suggests, Amazon tree boas spend most of their time in trees and shrubs. In the wild, they utilize a wide variety of habitats, but primarily live in lowland tropical forests that receive more than 60 inches of rain annually. They also inhabit disturbed areas, such as woodland edges, secondary forests, agricultural zones and human habitations.
They are found from sea level to an elevation of 3,280 feet and typically occur in habitats with continuous canopy contact. This allows them to move from tree to tree without descending to the ground. Juveniles, however, are most commonly found closer to the ground in low shrubs where they can hunt lizards at night. 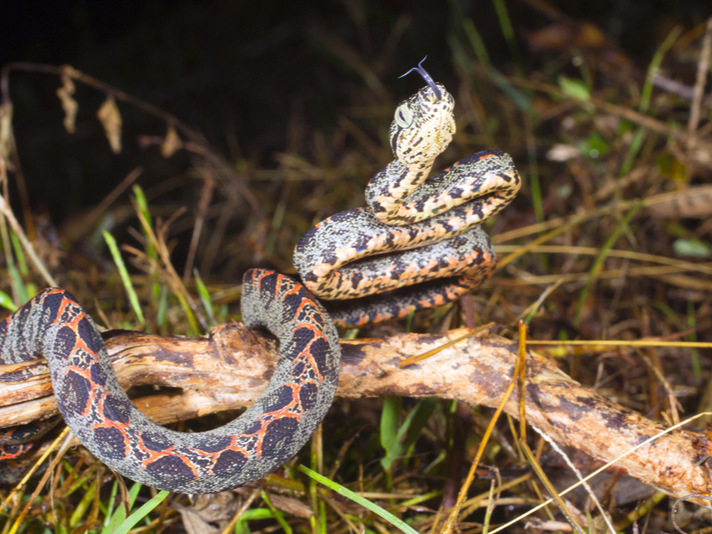 The Amazon tree boa (Corallus hortulanus) is the most geographically widespread of the tree boas. This here is a juvenile.

Dietary preferences shift as the snakes grow. In the wild, most juveniles feed on small lizards. As they mature, their diet shifts to ambushing rodents, small birds and probably bats.

Amazon tree boas have laterally compressed, slender bodies with long, prehensile tails. This body type aids in their ability to move through the canopy. Most adults average between 5 to 6 feet in length and 1 to 2 inches in diameter. Males are typically a little smaller than females in length and girth. They are more often on the lower end of the scale and females on the upper end. Neonates are born around 12 inches in length and a quarter inch in diameter. The head is large and noticeably wider than the neck. They grow rapidly and can reach sexual maturity by 3 to 4 years of age.

Captive Amazon tree boas will make full use of their enclosures. They are some of the most active of the tree boas. A cage should be large enough to allow the snake to move about without crossing its body. Consider 2 to 3 feet a minimum length for adult enclosures. Height is not as critical as you might think, but the minimum should be between 1 to 2 feet tall. Considering the animals’ activity patterns helps to understand the enclosure style. When active, these snakes crawl through the trees horizontally, occasionally moving from branch to branch. Although they change elevation within the tree, they seldom spend much time crawling up and down trunks. For this reason, horizontal space is more useful to them than narrow, vertical spaces. A width between 18 and 24 inches is sufficient. Naturalistic substrate can consist of various types of mulch, coconut fiber, leaf litter or a combination of these. Avoid using any cedar products. Cedar contains oils that are harmful to reptiles.

Most Amazon tree boas in the trade are wild-collected, older juveniles and adults imported most often from Guyana and Surinam. Imported specimens are typically aggressive. With their long, slender bodies and prehensile tails, their strike range is impressive. A good average is to expect a strike range of at least half the animal’s total length. Even captive-born neonates can appear aggressive, but this behavior is important when they need to survive in the wild. Most captive-bred individuals will calm down as they mature. Many animals raised in captivity will tolerate some handling; however, do not expect an animal as docile as a ball python (Python regius) or boa constrictor (Boa constrictor). Even though the occasional defensive strike from a captive-bred Amazon tree boa is not uncommon, it is far less forceful than that of a wild-collected specimen. Captive-raised individuals will normally allow you to safely clean and work within the enclosure. The more aggressive, imported specimens seldom calm down.

A variety of perching structures should be provided within the enclosure. Unlike their cousin, the emerald tree boa (Corallus caninus), which normally perches in concentric coils over a single branch, the Amazon tree boa is more comfortable with several perches that provide three or more points of contact to support its body. Its body position is reminiscent of a snake sitting on a horizontal surface located above the ground. Most captive specimens utilize hiding areas that are either elevated or on the ground. Providing such hides can make enclosure maintenance easier, especially with more aggressive individuals. These snakes prefer a hide that is snug but offers enough room to allow for growth. Increase hide size as the specimen gets larger.

Well-designed hides can be constructed to serve as traps to contain aggressive individuals while servicing enclosures. A simple trap-hide can be made with two inverted flower pots of the same size. Cut or drill an entry hole into the side or top of the pot. Its diameter should be at least one and a half times the diameter of the thickest part of the snake to avoid the animal getting stuck while entering and exiting the hide simultaneously. Place the pot upside down on a drainage saucer large enough for the inverted pot to sit in. Use the other flower pot (without a hole) to cover the hide when you need to trap the snake. Cork bark rounds can also be used as hides, but they don’t provide for a trapping option.
Considering their tropical habitat, Amazon tree boas do best when provided with daytime ambient temperatures between 82 and 85 degrees Fahrenheit. A basking site ranging 88 to 93 degrees will be utilized for a few hours each day. Specimens that have recently consumed a prey item or gravid females may make prolonged use of their basking sites. Basking fixtures can be turned off at night, and the ambient temperature can be allowed to drop 10 to 15 degrees. Humidity levels are best kept between 40 to 70 percent and can be increased when snakes enter a shed cycle. Humidity levels will fluctuate naturally between day and night. Humidity is often highest at night when the heat source is turned off and decreases as the day goes on due to the drying affects of the heat source.

Enclosure design can be as simple or complex as the keeper desires. A well-planted, tropical terrarium can be a beautiful addition to any room. Some keepers even successfully keep Amazon tree boas in mixed-species displays. Although controversial, this only works when the other species are not prey species. Cohabitants have included various amphibians, such as poison frogs (Dendrobates and Phyllobates spp.), treefrogs (Hyla and Phyllomedusa spp.), and compatible snake species, such as vine snakes (Oxybelis spp.) or small boa constrictors (Boa constrictor). Emerald tree boas (C. caninus) are compatible, but the two species have been known to interbreed. Avoid keeping two male Corallus species together; it will result in combat, injury and possibly death to one or both specimens. This is especially true if there is a female in the enclosure.

Keepers with multiple numbers of Amazon tree boas may find it easier to maintain their animals in more sterile enclosures. They seem to thrive equally well in such simple habitats. All that is needed is some newspaper substrate, stable perches and a water source. These types of sterile enclosures are best when quarantining new acquisitions, especially wild-collected individuals, as both external and internal parasites are common. So long as the animals’ basic needs are met, they seem to do very well.

Most Amazon tree boas, including neonates, will feed readily on domestic rodents. Being opportunistic feeders in the wild, they will eagerly consume prey more frequently than is actually necessary. For adults, a moderate-sized meal once every 10 to 14 days is sufficient. Neonates and growing juveniles can be fed more frequently — every seven days — until they become subadults. Prey items should be no more than 20 percent larger than the diameter of the snake’s middle. Vitamin and calcium supplementation may not be necessary but are probably beneficial to growing individuals and breeding females. Supplements can be applied to feeder rodents by dipping the rodent’s back end into the powdered supplement.

Clean drinking water should be available at all times. Arboreal boids will almost never soak in a water bowl. If they do, it is probably a sign of mite infestation and the specimen should be treated accordingly. Water sources can be placed on the ground, but they will also utilize elevated water sources.

Over the last several years, Amazon tree boas have seen a rise in popularity. This is most likely due to the efforts of dedicated hobbyists who have selectively bred many of the colored forms to intensify their colors and patterns. Several breeders have succeeded in producing multiple generations of captive-bred animals, and the results are truly stunning.

With each successive generation, not only do the colors and patterns become more vibrant, but the temperaments get better, also. With the vast majority of Amazon tree boas currently in the trade being wild collected, a hobbyist will need to do some searching to find quality captive-bred specimens. The cost may be greater, and the search may take a bit more effort, but it is well worth the time and money to obtain a beautiful, healthy and relatively mild-tempered pet. Resources such as the Amazon Alliance (amazon-alliance.com) will not only provide additional information on the species’ natural history and captive care but are also a good way to find quality, captive-bred specimens.

RICO WALDER worked in the zoo and aquarium industry for 20 years. He is the founder of Signal Herpetoculture and specializes in producing high-quality tree boas and green tree pythons. Visit him online at signalherp.com.