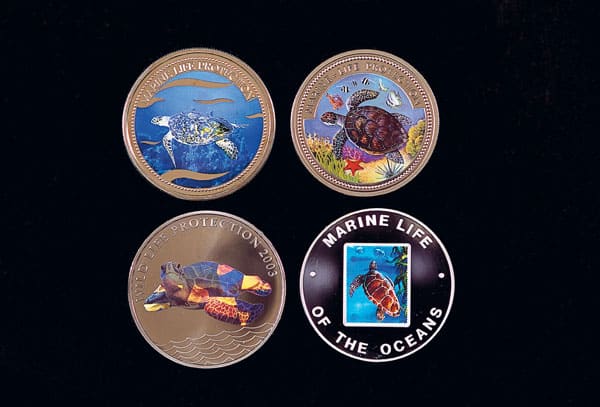 Some of the world’s earliest coins depict reptiles. The island of Aegina was the earliest state in European Greece to adopt the use of coined money.

Collecting coins, also referred to as numismatics, dates back to ancient times. One of history’s greatest rulers, Caesar Augustus, collected coins and presented them as gifts.

Coin values are determined by a variety of factors, including popularity, rarity, the coin’s material, and the coin’s grade or condition. Coins are typically minted from platinum, gold, silver, bronze, copper or alloys, such as cupronickel (a copper and nickel mix most commonly used in modern coins). A coin struck from precious metal possesses a bullion, or metallic value. Obviously, if a coin comprises an ounce of gold, its value will be no less than the current market price for an ounce of gold, and depending on the coin’s design and rarity, typically more. 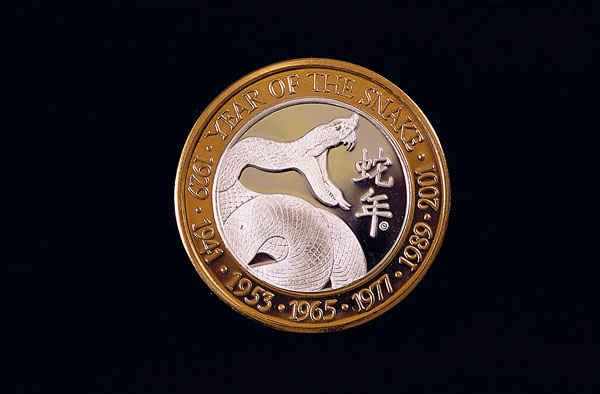 A viper is imprinted on this 100-pace casino silver strike.

Some of the world’s earliest coins depict reptiles. The island of Aegina was the earliest state in European Greece to adopt the use of coined money. The oldest silver staters, coins of the ancient Greek states or cities, featured a sea turtle. The original sea turtle design, which depicts a smooth-shelled sea turtle, dates to approximately 650 to 600 B.C. For the next approximately 300 years, Aegina produced a large quantity of coins, all with turtle designs. Over time the design was altered to include a series of dots running down the centerline of the carapace, and later a T-back turtle design was produced by adding two pellets to the front of the shell. A tortoise design sporting detailed scutes replaced the sea turtle design in approximately 404 B.C. 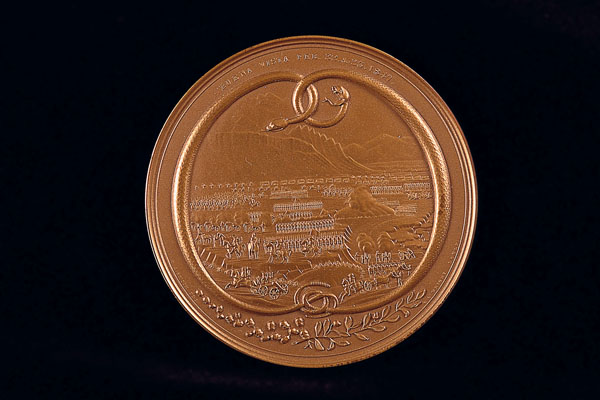 Bronze restrike of the gold Medal of Honor presented to Zachary Taylor. The original sold at an auction for $460,000.

Primarily dependent upon the design’s completeness and condition, turtle staters can be acquired for as little as $100 to $200. Fine-quality, exact reproductions in pure silver, formed using ancient techniques, can be found at very affordable prices. Greek turtle reproduction coins can range between $20 and $35. 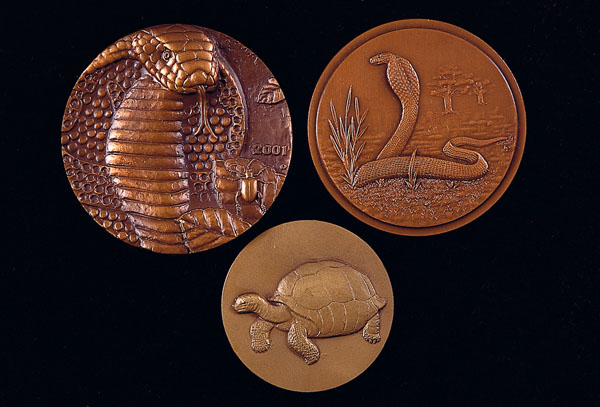 With these bronze medals, the two cobras celebrate the Chinese Year of the Snake, and a giant tortoise commemorates the 135th anniversary of Moscow Zoo.

Additional ancient coins featuring Salus, a minor goddess, appeared around 200 A.D. She was the Roman version of the Greek Hygeia, who was the daughter of Asklepios (Aesculapius in Roman mythology). Aesculapius’ staff, coiled by a snake, symbolizes the practice of medicine. One of Salus’ jobs involved feeding her father’s sacred snakes, and that is how most Roman coins depict her, as is Hygeia on Greek coins. Salus is typically shown seated next to a snake rising from an altar and feeding the snake from a patera, a shallow dish used in religious ceremonies. This must have been the origin of herpetoculture. Most Salus coins can be purchased for less than $50, and many are in the $20 to $30 range.

Unlike the United States, which primarily honors dead presidents, foreign countries have issued dozens of coins depicting reptiles and amphibians. The majority are sizeable, attractive silver proof examples, and many are issued in presentation boxes with certificates. Silver proof coins sporting a completely colored obverse (a coin’s front) can be found featuring herps. Snakes gilded in gold plating also appear on silver proof coinage. Several herp-designed silver proof coins are minted in a variety of exact weights and include oversize examples. These are basically for collecting bullion silver and can range in weight from a half-ounce to more than 2 pounds of pure silver. In addition, mints offer coins struck in gold, platinum and the less expensive cupronickel. 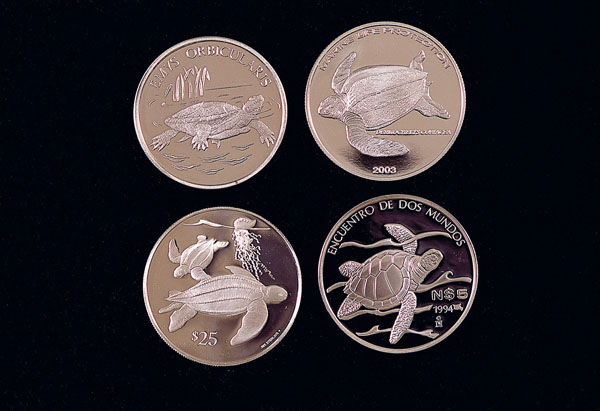 Although technically legal tender, the precious-metal proof pieces are minted for the collector market. With few exceptions, their cost from the mint is considerably higher than their face value. However, there are many examples of herp-design coins utilized as general-circulation legal tender. Australia’s 2-cent piece features a frilled lizard, a Fly River turtle adorns the Papua New Guinea 5-toea piece, the tuatara is on the obverse of New Zealand’s 5-cent coin, and many additional examples are exchanged for goods daily.

Foreign herp-themed coins often depict a native species from the issuing country with some including the animal’s scientific name. However, many coins feature nondescript reptile or amphibian designs. This includes coins minted to honor the Chinese calendar’s Year of the Snake (last celebrated in 2001), and they are produced by a variety of countries. A number of these coins feature a specific snake species, but others simply show a generic snake. 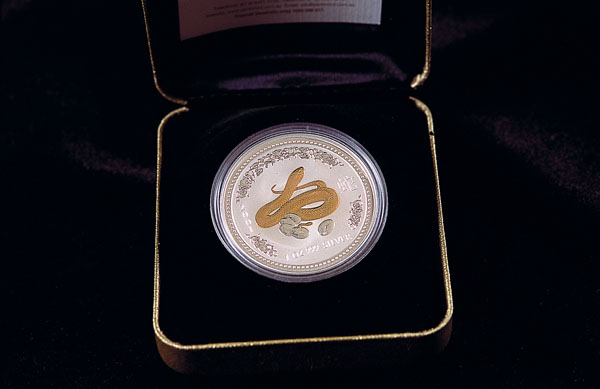 Herp coins issued by smaller countries are often minted outside their borders. European countries, the USA and others produce many of these coins. A 2004, one-quarter-ounce gold, 20-euro, French Guinea coin featuring a boa constrictor was actually produced at a small mint in California. With a reported issue of only 50 pieces, the coins were hand-struck, a technique that involves placing gold between the engraved dies and striking it by hand with a hammer.

A variety of reptile and amphibian design pieces also can be found in all areas of exonumia, collectible items such as tokens or medals that resemble money but are not intended to circulate as money. Like with coins, exonumia commemorating the Chinese zodiac Year of the Snake are well-represented. 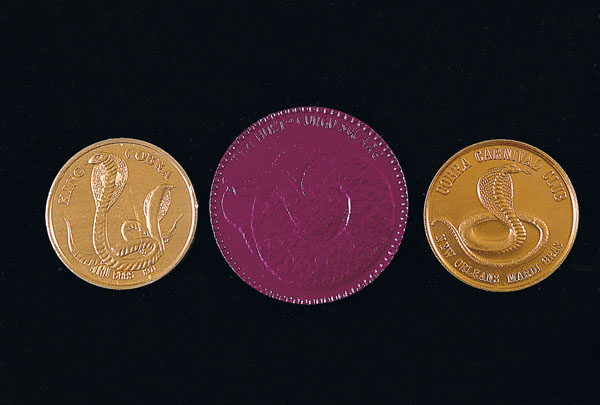 Medals: These are typically circular or round pieces issued for artistic or souvenir purposes as opposed to commerce. Produced for awards, commemoration, recognition or tradition, they are without exchange value. Medals don’t circulate, so they are generally found in mint to near-mint condition. They are often 3 inches or larger in diameter, allowing for great detail.

A wide variety of herp-design medals have been issued from sources such as the United States government, artistic bronze societies and zoos commemorating an anniversary. Recently an 1848 gold medal awarded by the U.S. Congress to Zachary Taylor sold at auction for $460,000. The medal commemorated service in the war with Mexico (1847), and the reverse (a coin’s back) is bordered by large renditions of a rattlesnake intimidating a noncrotaline snake. Later bronze copies can be found in the $20 to $30 range.

Tokens: Issued by entities other than governments, these exonumia usually consist of a metal object, but they can be plastic, cardboard or other materials. Tokens replace money and are redeemable for cash, goods or services. They possess an exchange value stated or implied, and they are circulated as money generally in a specific region.

Casino silver strikes (often abbreviated SS) are prize tokens housed in a round, two-piece, hard, transparent-plastic case. Several herp designs are featured on $10 strikes, and they have a .999, fine-silver center insert with an outer brass ring. Slightly larger than a U.S. silver dollar, they are dispensed from slot machines in lieu of coins or redeemable tokens. 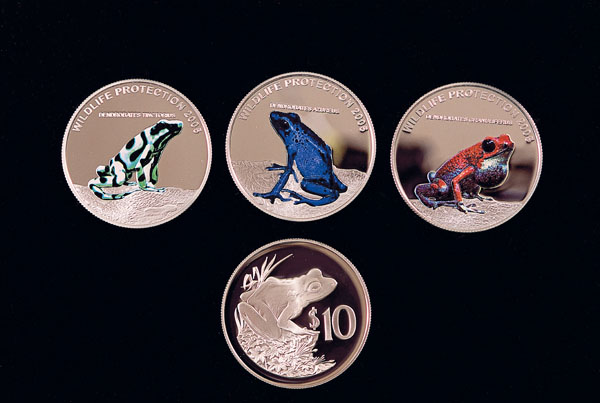 Dart frogs are featured colorfully in this set.

Some of the finest depictions of herps on “coins” can be found on silver strikes. One in particular, which I believe to be the best snake rendering, was issued by the Colorado Central Station Casino and commemorated the Year of the Snake 2001. The strike showcases a lifelike hundred-pace pit viper (Deinagkistrodon acutus), which fits well with the Chinese theme. Depending on desirability, rarity and availability, casino silver strikes can be found in the $10 to $30 range.

Mardi Gras doubloons: These brightly colored, U.S.-silver-dollar-sized aluminum pieces are a New Orleans tradition. They are thrown from floats during the parade. Solid silver and bronze examples are produced in small numbers, and they are used as special presentation pieces. Various “krewes,” clubs of the parade, sponsor the doubloons, which typically are embossed with the year.

Herps are a popular doubloon motif. Cobras symbolize various krewes, and snakes are also represented along with a voodoo queen. Additionally, through the years, a variety of alligator, turtle and frog doubloons have been issued. Most aluminum Mardi Gras doubloons are priced below $10. Silver and bronze examples usually sell from $10 to $25.

Elongated coins are governmental coins that have been elongated in a press to imprint wording or designs onto the coin to create a souvenir. These are also called smashed, pressed, flattened, rolled or stretched coins. The first elongated coins in the U.S. were pressed at the World’s Columbian Exposition of 1893 in Chicago, Ill. Now the most common elongated coins are pressed from U.S. pennies, but several quarter presses are in operation. Nickel and dime presses are less popular but available.

Modern coin presses are either electric or the hand-crank variety. Along with a series of gears, these presses have two hardened steel rollers. Typically, one roller, referred to as the die, is engraved with the design. As the coin travels between the rollers, 22 tons of pressure is exerted, causing the coin to heat and form an oval shape. To operate the majority of commercial machines, two quarters and your penny are required. It is difficult to beat a herp souvenir that sports great artwork for a mere 51 cents. In addition, at least a percentage of the proceeds benefit the institution housing the machine. 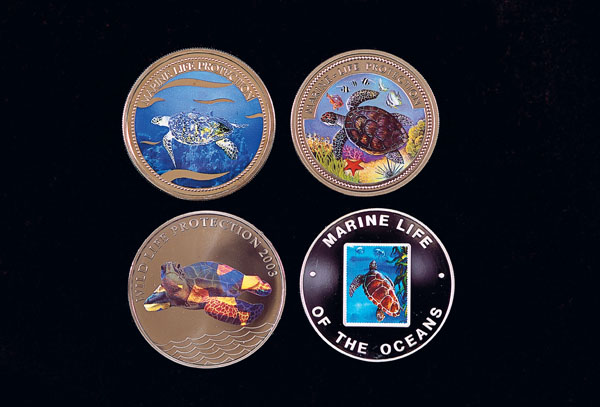 On the secondary market, currently available elongated pennies commonly sell for a dollar or two. Retired or privately produced designs can be difficult to locate, but herp designs do not seem to date before 1970, so all are relatively inexpensive.

There is no shortage of commercial machines featuring herp designs. Custom-designed coins also can be commissioned. My collection is just shy of 500 different herp-designed elongated coins. Zoos and aquariums are the most popular venues for coin presses with herp themes. However, locations as unlikely as turnpike rest stops have been found possessing the elusive herp-elongated-coin offering. Presses located overseas also produce a few herp designs on foreign coins.

Before your travels, note a couple tips. Visit pennycollector.com. This website provides information about available designs and exact machine locations. For the most attractive, long-lasting results, press only pre-1982 copper pennies. In 1982, the U.S. mint changed the cent from 95 percent copper to a 97.5-percent zinc core with a 2.5-percent copper clad or plating. When pressed, newer pennies show silver streaks, which usually detract from the design.

Silver art bars are commonly produced as a single (troy) ounce of pure (.999, fine) silver. These bars are a convenient method of collecting bullion silver. Additionally, their attractive themed designs add desirability as a topical collectible. 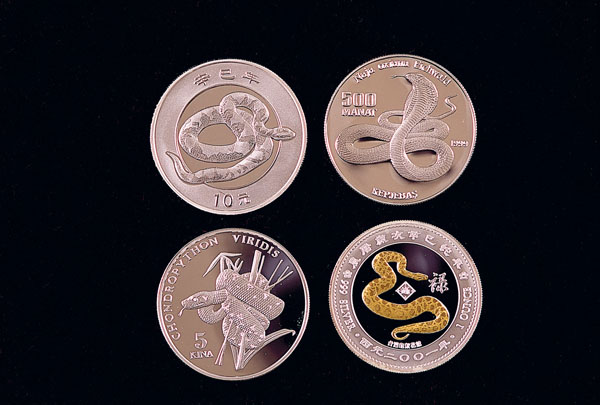 Various herp-motif bars have been produced. These are typically issued within broad-themed wildlife sets, but single herp-design bars have been made. Most herp-design silver bars sell for more than the current price of an ounce of silver.

Silver rounds are similar to bars. They typically contain 1 ounce of pure silver, but as their name implies, they resemble coins. There are a greater variety of herp-design rounds, and some can be purchased for only the silver bullion value.

Collecting reptile- and amphibian-designed coins and exonumia can be an interesting and rewarding hobby. Pieces can cost anywhere from 51 cents to thousands of dollars, but often coins and exonumia increase in value — some substantially.

Herp coins are not nearly as popular as mainstream U.S. coin collecting, but dealers attend coin shows and can be located on the Internet. Some collectors, including myself, have been known to sell herp coins through mail order and at reptile shows, as well.