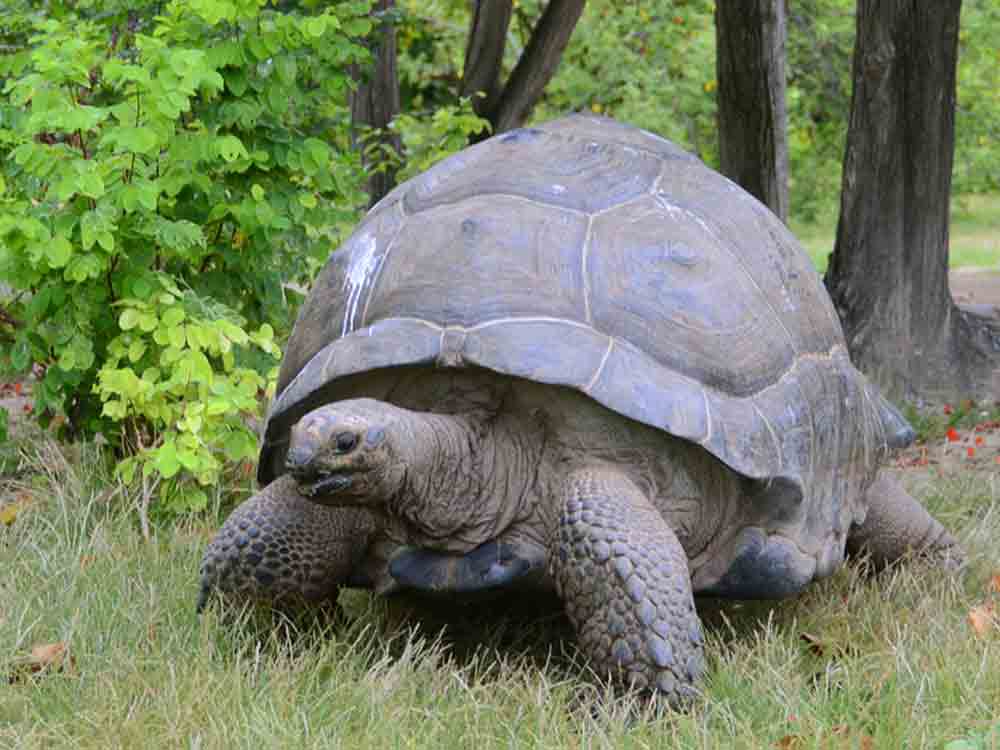 Aldabra tortoises are so named because of where they are found in the wild, the Aldabran Atoll off the coast of the Seychelles.

Hermania, an Aldabra giant tortoise who lives in the Zurich Zoo, served as the animal in which the researchers built the reference genome.

Researchers with the University of Zurich, led by Gözde Çilingir, have successfully sequenced the genome of the Aldabra giant tortoise (Geochelone gigantea).

The researchers detail their findings in the journal GigaScience and say that scientists around the world have access to the high quality genome sequence that will strengthen the conservation and future of this species. The Aldabra giant tortoise is listed as vulnerable by the IUCN and is a CITES Appendix II animal.

“This genomic information is crucial in order for breeding programs in zoos to represent the genetic diversity found in the wild,” Gözde Çilingir, first author of the study said in a press release. “We found that most of the genome is similar to other known genomes of turtles,” Çilingir said. “This means our data will help the conservation efforts for other tortoise species across East Africa and Madagascar.”

The complete paper detailing the reference genome, “Chromosome-level genome assembly for the Aldabra giant tortoise enables insights into the genetic health of a threatened population,” can be read on the GigaScience Journal website.

Aldabra tortoises are so named because of where they are found in the wild, the Aldabran Atoll off the coast of the Seychelles. The giant tortoises can weigh up to 500 pounds, making them one of the biggest tortoises in the world. The Galapagos tortoise is bigger. Mostly herbivores, the Aldabra tortoise feeds on grasses, leaves, plants, stems and weeds.

The tortoises were once found on most of the islands in the Indian Ocean. They were hunted for their meat and disappeared from Madagascar, Mauritius and Reunion islands until 1900, when Charles Darwin offered to pay half the atoll’s lease to anyone who could ensure that the exploitation of the reptile was stopped. Aldabra Island has been managed by the Seychelles Islands Foundation since 1981 as a special reserve. It has been completely protected under the Seychelles National Parks and Nature Conservancy Act, and the giant tortoises have been monitored every month for the past 20 years