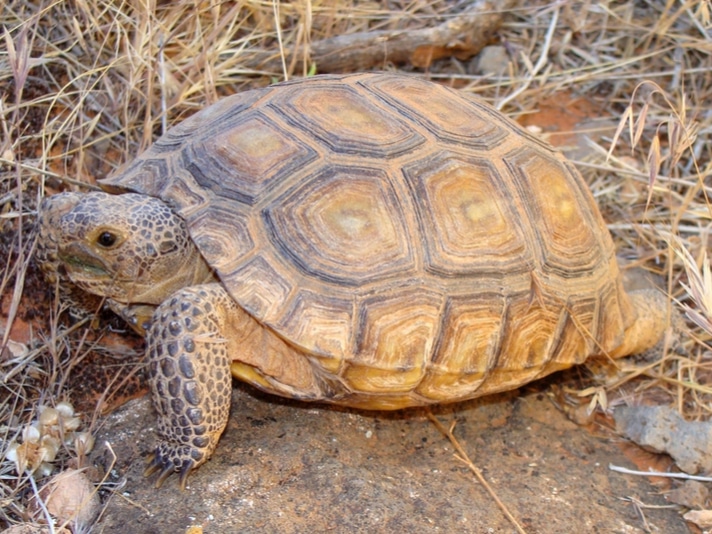 It is speculated that more desert tortoises can be found in captivity than in the wild.

Unique Feeding Behavior For A Snake; Tearing Its Food Apart Before Eating It
Yellow-Bellied Water Snake Gives Birth via Parthenogenesis
Strangers Come Together to Help Monitor Lizard Hit By Car in Bangkok

A head start program to help bolster the wild populations of the Agassiz desert tortoise (Gopherus agassizii) was launched last week in Southern California. The program, part of a collaboration effort with the U.S. Geological Survey, San Diego Zoo Global, Edwards Air Force Base, Cadiz, Inc., and the Bureau of Land Management, will focus on captive breeding the tortoises using techniques to increase their survival and then follow them via radio transmitters as they are reintroduced to their natural range.

“As humans impact native habitats we often need to find ways to successfully move animal species out of harm’s way,”  Ron Swaisgood, Ph.D., a recovery specialist for San Diego Zoo Global said in a statement released by the zoo.  “It is important to have scientific knowledge to guide recovery efforts that seek to reintroduce species into recovered and protected habitats.”

The program revolves around 30 wild female tortoises that were brought into the head start facility before they laid their eggs. Once the eggs are laid, the 30 females will be returned to the location in which they were removed and the eggs will hatch naturally and with minimal human intervention at the facilities, which are sponsored by Edwards Air Force Base and Cadiz, Inc., a water resources company that owns 70 square miles of property and water resources in Southern California, according to the San Diego Zoo Global press release. The hatchlings will be cared for until they are six months and 18 months of age and then released into two types of habitats.

“We will track the juveniles that are released to learn more about their habitat needs and threats to survival as they encounter challenges in their natural habitats.” Lisa Nordstrom, researcher for San Diego Zoo Global said. “By experimentally testing both juvenile size and habitat, we will be able to evaluate the relative effectiveness of head-starting and release methods.”

It is hoped that the biologists involved with the project will gain a better understanding of the habitat requirements of juvenile tortoises for their health and survival, as the young tortoises are generally more difficult to locate in the wild.

“Desert tortoise populations are declining at a rapid rate throughout much of the geographic range. This multi-agency effort is designed to increase our understanding of factors affecting juvenile tortoise survival in different regions of the desert," Kristin Berry, research wildlife biologist with the USGS said in the statement. "We hope our research results will contribute to recovery efforts for the species.”