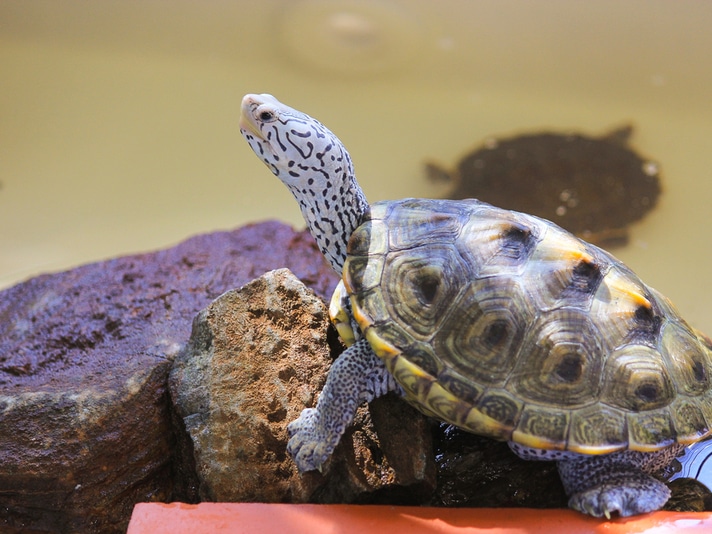 Troy Russo pushed the turtle's legs in and out to expel water and then performed mouth-to-mouth resuscitation.

A man in Florida, trained in CPR, used that training on a hapless diamondback terrapin (Malaclemys terrapin) who got caught in the man’s crab trap, with great success!

Troy Russo, a resident of Santa Rosa Sound in Parrish Point, Fla., was checking his crab traps right after Hurricane Nate and found the turtle in the trap, its head stuck in the mesh.

“He was trying to get air,” Russo, a turtle fan, told Northwest Florida Daily News. “His neck was extended. His eyes were still open. There was no movement. I was like, ‘Oh my gosh.’”

After Russo freed the turtle from the trap, he noticed some movement and immediately began CPR, but how do you perform CPR on a turtle?

Russo wasn’t able to massage the heart because, well the turtle has a shell that protects it, so he began pumping the reptile’s legs in and out of the shell to help push out water and then started mouth-to-mouth resuscitation.

“I just put my mouth over his beak and tried to push some air in,” he said. “I did that five or six times, alternating with the pushing in legs to try to expel water.”

Russo spent about half an hour trying to revivfe the turtle, and then left it alone, at which point the turtle was able to breathe on its own.

Russo was certainly happy with the outcome. He likes turtles!

“I’ve just always liked turtles, I just like them as creatures,” he told Northwest Florida Daily News. “I knew if I didn’t do anything it would have died.”

Russo later released the turtle in a marsh near his home.