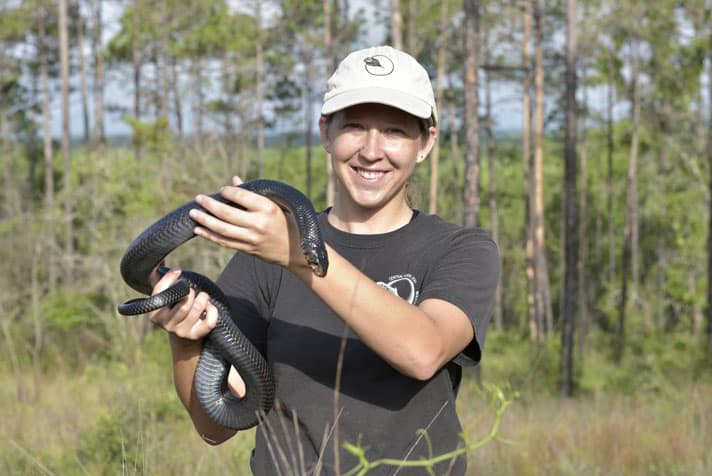 The eastern indigo snake has not been seen in the Apalachicola Bluffs and Ravines Preserve for more than 35 years.

The Florida Fish and Wildlife Conservation Commission, in coordination with the Orianne Center For Indigo Conservation (OCIC) and the Nature Conservancy have released 20 eastern indigo snakes (Drymarchon corais couperi) into the Apalachicola Bluffs and Ravines Preserve, a location where the snake hasn’t been seen in more than 35 years. 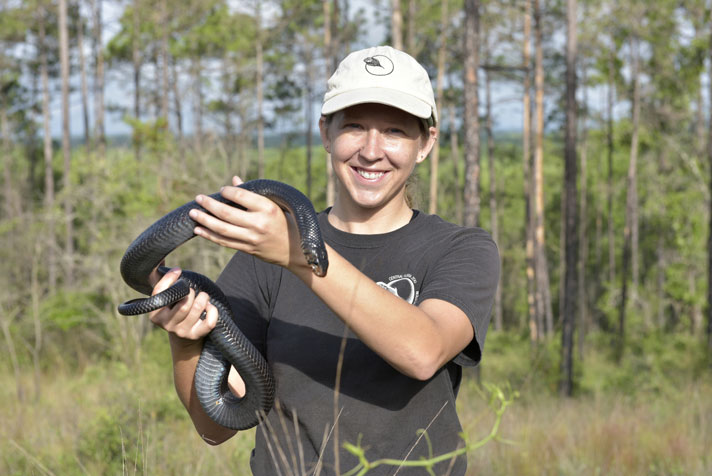 Michelle Hoffman of Central Florida Zoo's Orianne Center for Indigo Conservation gets ready to release an indigo snake to the Conservancy's Apalachicola Bluffs and Ravines Preserve.

"The Nature Conservancy manages the property, and they have worked for many years to restore this habitat to the wonderful longleaf pine ecosystem that is now present," the Orianne Center For Indigo Conservation wrote on its Facebook page. "Eastern indigo snakes were not seen on the property since 1982, with the exception of last year with the first release in this 10-year reintroduction project."

Have you heard? Our team helped release 20 eastern indigo snakes at the Apalachicola Bluffs and Ravines Preserve in northwest Florida. The snakes were bred and raised at OCIC. Michelle Hoffman, Deputy Director, explains in this video. #SavingSpecies Video by Andy Wraithmell / FWC Thanks to our many partners: The Nature Conservancy, MyFWC, Auburn University, U.S. Fish and Wildlife Service, Joseph W. Jones Ecological Research Center, Gulf Power Company, Southern Company through the @National Fish and Wildlife Foundation, and the Fish & Wildlife Foundation of Florida.

Posted by Orianne Center For Indigo Conservation on Tuesday, July 24, 2018

As the location was restored, the habitat became better suited to the survival of the snake and the other species that call the preserve home.

"The eastern indigo snake prefers high dry sandy habitat, preferably where you would find gopher tortoises," Michelle Hoffman, Deputy Director of the OCIC said in a video showcasing the release. "They actually use gopher tortoise burrows, they live alongside gopher tortoises and go down into the burrows when it gets too cold and also too hot."

"We actually raise them for about two years before they are released into the wild," Hoffman said.

The OCIC last year released 12 indigo snakes into the Apalachicola Bluffs and Ravines Preserve. The captive-bred snakes are all fitted with radio transmitters to monitor their whereabouts and to determine how they are using the habitat in which they were released.