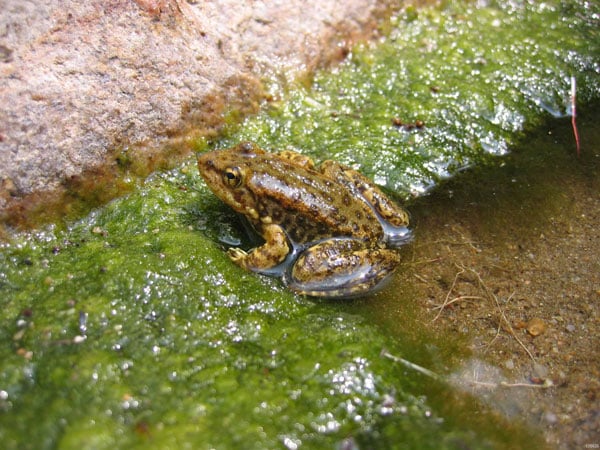 Some of the frogs, part of a breeding and reintroduction program started in the mid 2000s are outfitted with radio transmitters.

The mountain yellow-legged frog (Rana muscosa) one of the most endangered frogs in the world with an estimated 300 adult frogs remaining in the wild, just got a boost in their numbers as scientists released 100 captive-bred frogs in a southern California stream in the San Jacinto Mountains. According to a report in the Press Enterprise, scientists with the San Diego Zoo's Institute of Conservation Research, the U.S. Geological Survey, and the U.S. Fish and Wildlife Service released the frogs, some with radio transmitters, into Indian Creek, a location that hasn't seen wild mountain yellow-legged frogs since 1996.

The natural range of the frogs includes the San Jacinto, San Gabriel, and San Bernardino mountain ranges in southern California and the southern Sierra Nevadas of California. According to the report, the scientists know of three populations of the frog in the San Jacinto Mountains and nine total distinct populations throughout the three mountain ranges.

The hope is that the frogs released into Indian Creek will stay in the creek and reproduce, said Adam R. Backlin, a U.S. Geological Survey field ecologist. Backlin, who has been working with the frogs for more than 10 years said that the scientists are interested in how the frogs respond to their new environment.

The froglets that were released are just over a year old and were reared at the Institute of Conservation Research at the San Diego Zoo, which has produced about 300 frogs in recent years. The Los Angeles Zoo has reared 210 frogs.

Caltrans provided funding for the capture and reintroduction program for the frog as part of a mitigation effort for a Caltrans road project on Highway 330.

The program has experienced its ups and downs over the last several years. In 2006, seven frogs died at the San Diego Zoo, victims to the Chytrid fungus that has wreaked havoc on amphibian populations around the world. In the summer of 2011, 104 sub-adult froglets set for release died at the Fresno Chaffee zoo. The cause was not determined. In September 2012, Backlin and fellow USGS field ecologist Elizabeth Gallegos discovered a pool of water along the Mojave River in California full of 71 adult frogs and hundreds of tadpoles.

The mountain yellow-legged frog is unique in that its tadpole stage is fairly long, about a year, before they metamorphose into frogs. They are also long lived, capable of living 10-15 years. They are disappearing throughout their natural range due to such factors as pesticide use, the planting of predatory trout in their native streams and ponds, pollution, livestock grazing and the Chytrid fungus.