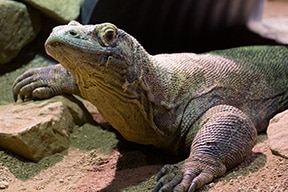 Reptile was euthanized due to age-related complications.

Relative to Tuatara Discovered In North America
How Do Lizards Regrow Their Tails? Researchers Have Found The Answer
Kingman, Arizona Unveils A Chuckwalla Sculpture

Slasher, Zoo Atlanta's resident Komodo dragon (Varanus komodoensis) and one of the zoo's most popular animals, died August 5 after a decline in his mobility and age-related issues. He was euthanized by the zoo's Animal Management and Veterinary Team. Slasher hatched at the Smithsonian's National Zoo in October 1992 and was sent to Zoo Atlanta in July 1993. According to a statement released by the zoo, Slasher was one of the most popular animals at the zoo and could often be seen basking in the sun. He had an aptitude for learning, and did well with a training regimen tailored for him. He also helped launch the zoo's Komodo Dragon Wild Encounter program last year, a popular program that enabled visitors at the zoo to go behind the scenes to feed him. 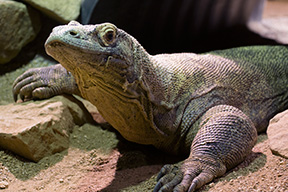 Slasher, the resident Komodo dragon at Zoo Atlanta has died.

"We see our share of members and guests who have an avid interest in reptiles, but it’s not often that visitors make the same sort of connection with a reptile that we see them make with many other animals. That can’t be said for Slasher,” said Raymond B. King, President and CEO of Zoo Atlanta. "He was one of the Zoo’s most charismatic residents, and few people who ever saw him, much less had the opportunity to meet and feed him, ever forgot him.”

Komodo dragons are the largest lizards in the world and are range in size from 4 to 10 feet in length and weighing more than 300 pounds. Native to Indonesia, the Komodo dragon eats birds, invertebrates, deer, and other small mammals. It can be found on the Indonesian islands of Komodo, Rinca, Flores, Gili Motang, and Padar and 26 smaller islands in the Indonesian archipelago.