Employees both bitten in leg by Varanus komodoensis.

A Komodo dragon (Varanus komodoensis) at Komodo National Park was reported to have attacked and bitten two park employees, sending both to the hospital with bite wounds to the legs. According to the Jakarta Globe, Ahmad Main, 50, was attacked by what was estimated to be a two meter (6.5 feet long) long Komodo dragon while sitting in an office at the park on Rinca Island. 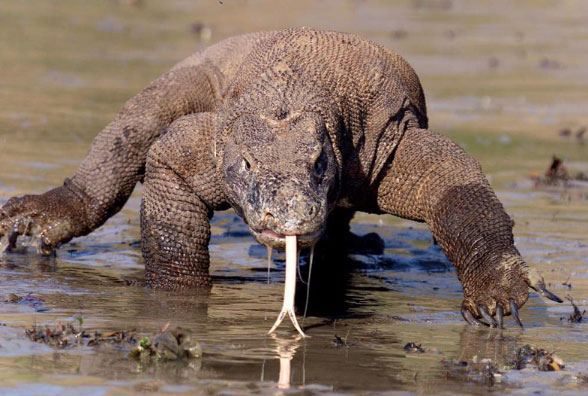 According to the story, Main jumped out of his chair and shouted for help with the lizard latched onto his leg. Park employee Usman Li, 35, heard Main's cries for help and came to assist him. Li was able to pull the lizard off Ahmad, but received bites to his left leg in the process. The lizard was then chased away by other park employees.  Sustyo Iryono, the head of the national park said that Main received 41 stitches to close the wound to his leg and Li received 42 stitches to close the bite on his leg.

The Komodo dragon is native to Indonesia and can be found on the islands of Komodo, Rinca, Flores, Gili Motang, and Padar. It is the world's largest lizard. Its size ranges from 4 to 10 feet and can weigh more than 300 pounds. Varanus komodoensis feeds mainly on birds, invertebrates, deer, and other mammals as well as dead animal matter. They have been known to attack humans.

Komodo National Park was founded in 1980 in an effort to help protect the Komodo dragon, which is listed by the IUCN as vulnerable. The park is comprised of the islands of Komodo, Padar, and Rinca as well as 26 smaller islands with a total area of 1733 square kilometers (669 square miles). The park was declared a UNESCO World Heritage Site in 1991.