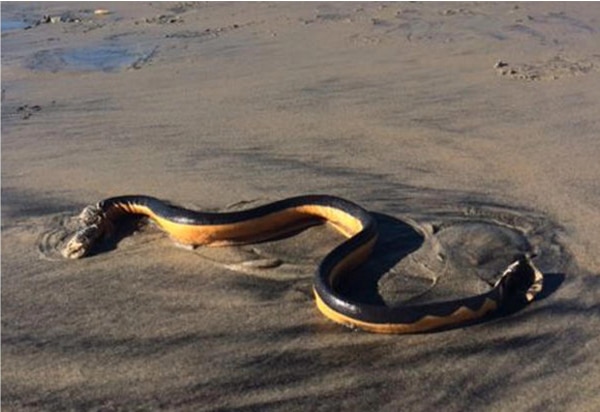 The sea snake most likely got caught in the cooler waters off the coast.

A third yellow-bellied sea snake (Pelamis platurus) has washed ashore on a Southern California breach, this time on Coronado's Dog Beach in San Diego, Calif. The venomous snake, which measured 20 inches in length, was first spotted by a beachgoer who contacted area lifeguards. The lifeguards retrieved the snake and placed it in a bucket where it died, according to Coronado city officials. 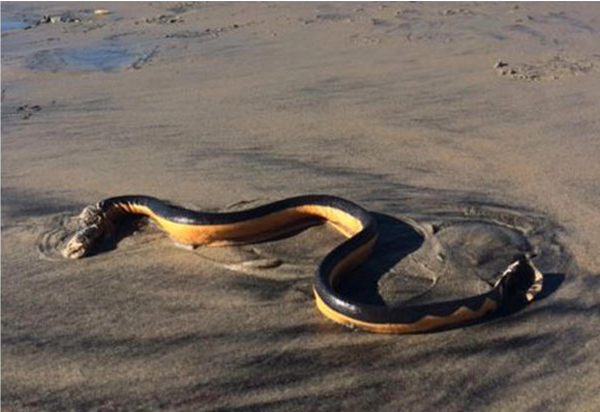 This is the third yellow-bellied sea snake to wash ashore on a Southern California beach in recent months.

According to Greg Pauly, herpetological curator with the Natural History Museum of Los Angeles County, the yellow-bellied sea snakes may have swam north from their warm water habitats of Mexico during the warm water event that had occurred off the Southern California coast for the last six months.

That event ended and the water off the Southern California coast has returned to a normal 57-60 degrees Fahrenheit, possibly stranding the cold blooded reptiles thousands of miles from their native habitat.

The yellow-bellied sea snake is the only pelagic sea snake. If you are bitten by this venomous snake, you can experience damage to skeletal muscles, paralysis and renal damage. Bites though are rare and nobody has been reported to have died from a bite of this species. The snake is normally found in Baja California waters, and off the coasts of Africa, Asia, Australia, and Central America.