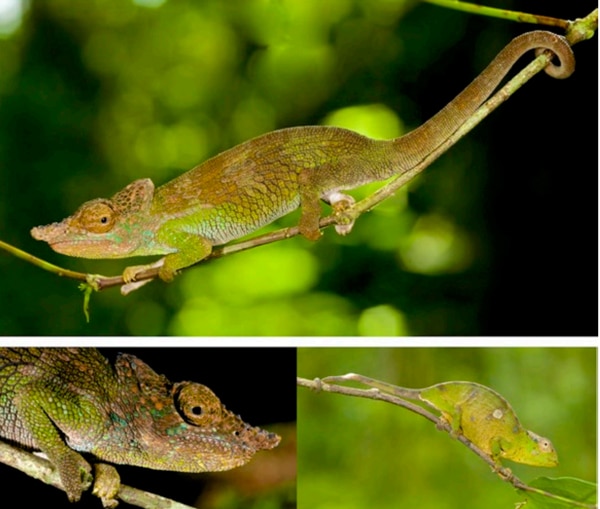 The chameleon, Kinyongia msuyae, was recently described in the journal Acta Herpetologica

Chameleon lovers take note as a new species of chameleon has been discovered in four montane forest areas in the Udzungwa Mountains and Southern Highlands of Tanzania.

The chameleon, Kinyongia msuyae, was recently described in the journal Acta Herpetologica. It is brown to green in coloration with scattered blue spots that are created by single scales or clusters of several scales. The tip of its snout is brown to gray in coloration. It is a smaller chameleon that has no distinctive color patterns and its tail is longer than its snout to vent length. They range in total size from 97 to 150mm in length.

The reptile was named after Tanzanian biologist Charles A. Msuya, who has spent much of his life researching the reptiles and amphibians in the East African country.

The discovery of the chameleon debunks the zoological barrier that some scientists say exists between Southern Highlands and Eastern Arc Mountains of the region. Known as the Makambako Gap, some argue the barrier doesn’t exist.

"Along with our discoveries of the Kipunji, Matilda's horned viper and other reptiles and frogs, this new chameleon really seals the deal as regards the boundary of the Eastern Arcs," Tim Davenport, Director of Wildlife Conservation Society's Tanzania Program and a co-discoverer of the chameleon, told VOA News.

"It is very clear now that the so-called Makambako Gap doesn't exist zoologically and that the Southern Highlands is every bit as biodiverse and endemic-rich as all other Eastern Arc Mountains. With its own unique fauna and flora the region thus warrants as much protection as we can possibly afford it."