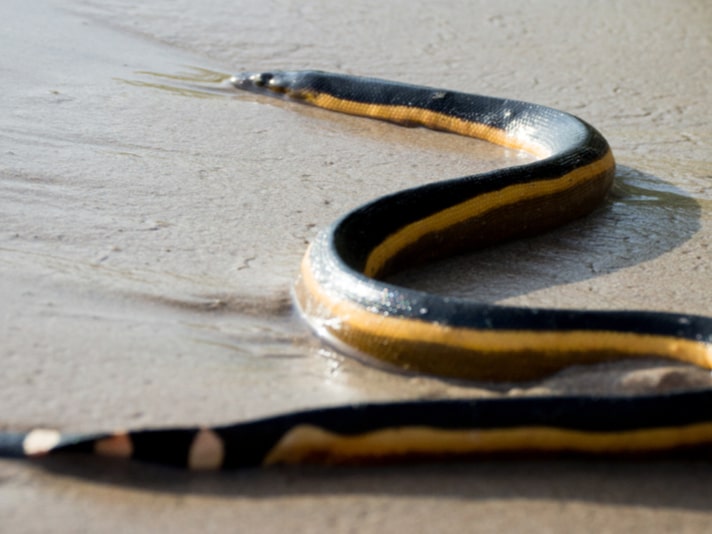 Hydrophis (Pelamis) platurus spends as long as 7 months in a dehydrated state.

While sea snakes spend nearly their entire lives in sea water, they have to drink freshwater in order to survive. A new study in the March 18 journal Proceedings of the Royal Society B says that the pelagic sea snake Hydrophis (Pelamis) platurus, or yellow-bellied sea snake, dehydrates at sea and spends much of its life, possibly six to seven months out of the year in a dehydrated state. The snake's state of dehydration corresponds to seasonal drought, the study's authors said.

According to the study, the snakes, which were captured in the Gulf of Papagayo off Costa Rica's Guanacaste coast, must drink freshwater and do so when there are heavy rains that create a freshwater layer on the surface of the ocean. The authors made 10 trips to the coast and captured more than 500 live yellow-bellied sea snakes during varying seasons with and without rainfall. They measured the total body weight of 40 snakes and found that those in more dehydrated states measured 73.3 to 75% TBW while those more hydrated measured 79 to 81.6% TBW.

The authors say the study will help bring an understanding to the freshwater requirements of the sea snakes, possible reasons for their recent declines and extinctions and how changing precipitation patterns may affect these reptiles. Authors of the study include Harvey B. Lillywhite and Coleman M. Sheehy III of thje Department of Biology at the University of Florida, Francois Bischoux of 2CEBC UMR 7372 CNRS-ULR, 79360 Villiers en Bois, France, and Alana Grech of the Department of Environment and Geography, Macquarie University, New South Wales Australia.

The yellow-bellied sea snake, Hydrophis (Pelamis) platurus is the only pelagic sea snake and can be found in the eastern Pacific Ocean as well as coastal southeast Africa to Central America to the Indo-Pacific. It is a venomous snake that damages skeletal muscle, causes paralysis and renal damage.