Year Of The Frog

Find out how you can participate in 2008’s Year of the Frog.

Earth is facing its largest mass extinction since the disappearance of the dinosaurs, according to the Amphibian Conservation Action Plan. From one-third to one-half of the planet’s 6,000 amphibian species – frogs and toads, salamanders and newts, and caecilians, which have thrived for 360 million years – are in danger of extinction. 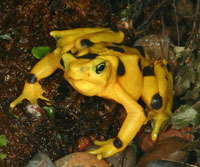 To mitigate this crisis, the world’s leading conservationists have joined together to name 2008 “The Year of the Frog” in hopes of raising both awareness and the critical funding needed to address the crisis. Amphibians are often called “the world’s canaries in the coal mine,” and when hundreds of species are in decline it serves as a global warning to other species.

A broad strategy, called the Amphibian Conservation Action Plan (ACAP), will unfold to protect habitat and address other environmental threats. ACAP’s most urgent initiative, the Amphibian Ark, will develop, promote, and guide short-term captive management of the most threatened amphibians, making possible the long-term survival of species for which adequate protection in the wild is not currently possible.

The goal of the 2008 Year of the Frog campaign is to raise awareness of the crisis among media, educators, corporations, philanthropists, governments, and the general public, and to generate the funding needed to implement ACAP. The Amphibian Ark component alone will cost $50 to $60 million.

“The global zoo and aquarium community has taken on this challenge with enthusiasm and is providing appropriate facilities and breeding grounds within their institutions,” said Sir David Attenborough, patron of the 2008 Year of the Frog campaign. “But implementation calls for financial and political support from all parts of the world. Without an immediate and sustained conservation effort to support captive management, hundreds of species of these wonderful creatures could become extinct in our own lifetime.”