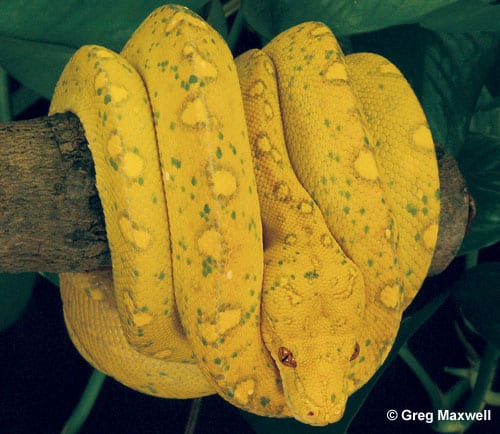 Learn about the green tree python in its natural wild habitat.

The green tree python is indigenous to New Guinea and some of its surrounding islands, and the Cape York Peninsula of Australia. These small, arboreal, nocturnal pythons inhabit a variety of habitats: low coastal scrub areas, cooler mountain environments up to 6,500 feet, and rain forest areas between. Green tree pythons favor fringe habitat, and they probably avoid deep-forested areas and the high canopy. Observers and collectors in these pythons’ home range report that the pythons frequently hunt in low plant growth and are also seen crossing roads at night. 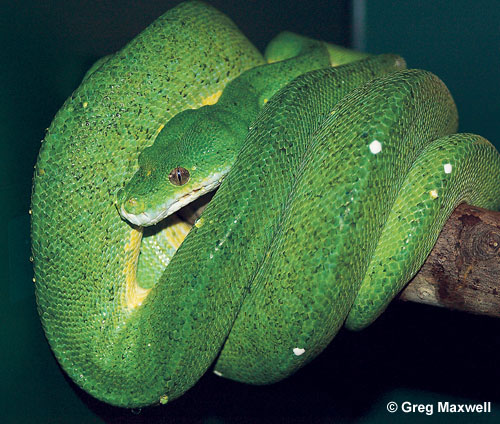 Although decidedly arboreal by nature and in possession of prehensile tails, green tree pythons do not hesitate to secure a daytime resting place in a secluded ground location. They often return to the same nighttime hunting location.

New Guinea experiences heavy rainfall during much of the year and the climate is warm except for high elevations. Due to its location near the equator, the photoperiod is approximately 12 hours in length. Green tree python keepers should replicate these conditions, though extreme cage humidity and excessive temperatures should be avoided.

Green tree pythons are fairly small as pythons go. Average adult males attain a length between 36 and 48 inches, and weigh about 1¾ to 2 pounds. Females average slightly larger. I have seen specimens of green tree pythons that measured close to 60 inches long and weighed more than 3 pounds.

Green tree pythons invariably adopt a resting coil on an appropriately sized perch, and in this position they appear smaller than they actually are. Because of this appearance and the fact that they do not move during daylight hours, they are much less frightening to people than many terrestrial snake species.

Like all pythons, green tree pythons are egg layers and constrictors. They feed on small mammals, and green tree python neonates probably hunt for small lizards and amphibians. Field research has shown that these snakes do not take birds as often as is popularly thought. They do utilize heat-sensitive labial receptors, and great care must be exercised when feeding captive specimens so the heat is not supplied by the keeper’s hand!

Currently, taxonomists recognize just one species of green tree python, but there are several geographic races. Some research is being done to determine if any of these races qualify for subspecific status. Four races are generally recognized: the island populations of Biak and Aru, the mainland specimens of New Guinea (hobbyists break these into many localities, which have varying degrees of credibility), and the Cape York race. Specimens from this last group have been shown to have close genetic ties to specimens from southern Papua New Guinea. Some hobbyists also have begun to recognize a new island form known as “canary.”

Mainland New Guinea specimens are usually given a locality designation based on appearance. Some commonly used locality names are Sorong, Jayapura, Merauke and Wamena. Perhaps the best use of these locality names is to identify traits that hobbyists are attempting to maintain in captive-breeding projects. Green tree pythons are much too variable to make accurate locality identifications based on the snake’s appearance.

Breeders have capitalized on the highly variable appearance of the green tree python to produce some fantastic color variations, such as blue, high-yellow, calico, melanistic and pastel forms. Currently, an albino strain is being developed.