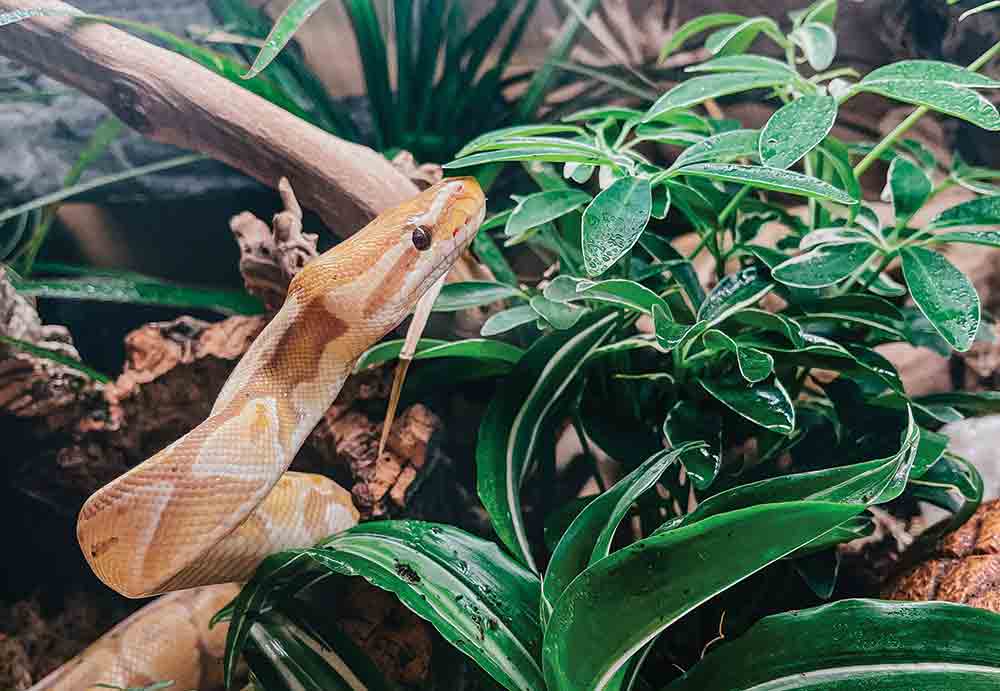 How does reptile enrichment translate for hobbyist keepers?

How much enrichment should we provide for captive reptiles?

Enrichment is an extremely important aspect of reptile welfare that can reduce stress-related behaviors.

The question of how much enrichment to provide to reptiles is a difficult one. Depending on where keepers search for the information, they will get a range of differing opinions. The importance of enrichment within animal care should not be understated. Defined by Ethologist David Shepardson in 1998, enrichment is “an animal husbandry principle that seeks to enhance the quality of captive animal care by identifying and providing the environmental stimuli necessary for optimal psychological and physiological well-being.” Furthermore, the provision of enrichment is one of the five international standards of pet care. These globally recognized five standards–expressed as five freedoms– were developed by the UK Farm Animal Welfare Council, and enrichment falls under Freedom 4: “the freedom to express normal behavior.”

For pet owners and larger-scale breeding operations, basic enclosures for reptiles are a pervasive theme within herpetoculture. Consequently, a 2006 study by Lynn M. Almli and Gordon M. Burghardt published in the Journal of Applied Animal Welfare Science used subadult groups of the black rat snake (Elaphe obsoleta) and yellow rat snake (Elaphe obsoleta quadrivittata) to study behavioral performance in snakes kept in clinical surroundings versus those kept in enriched enclosures. The snakes were captive-bred and housed in identical conditions for their first year of life until the start of the experiment.

At 12 months, Almli and Burghardt randomly separated them into two groups using a split-clutch design. Snakes kept in the standard clinical enclosures were given paper substrate, no vertical climbing options, no additional objects to provide stimulus, only one terrestrial hide, and a water bowl. In contrast, the snakes kept in enriched conditions were not only just provided a terrestrial hide and water bowl but given shredded aspen for use as a burrowing substrate, a branch for vertical climbing opportunities, a hide located at the top of the branch for an elevated perch, and a moist container filled with sphagnum moss. Several trials then ensued to test the behavioral responses of both groups of snakes. Almli and Burghardt gave both groups of snakes a maze-like apparatus to explore during a problem-solving task loaded with scent clues. Next, they used an open field task to determine how both groups investigated novel surroundings. Their final experiment was a feeding test to determine how both groups responded to unfamiliar prey items. 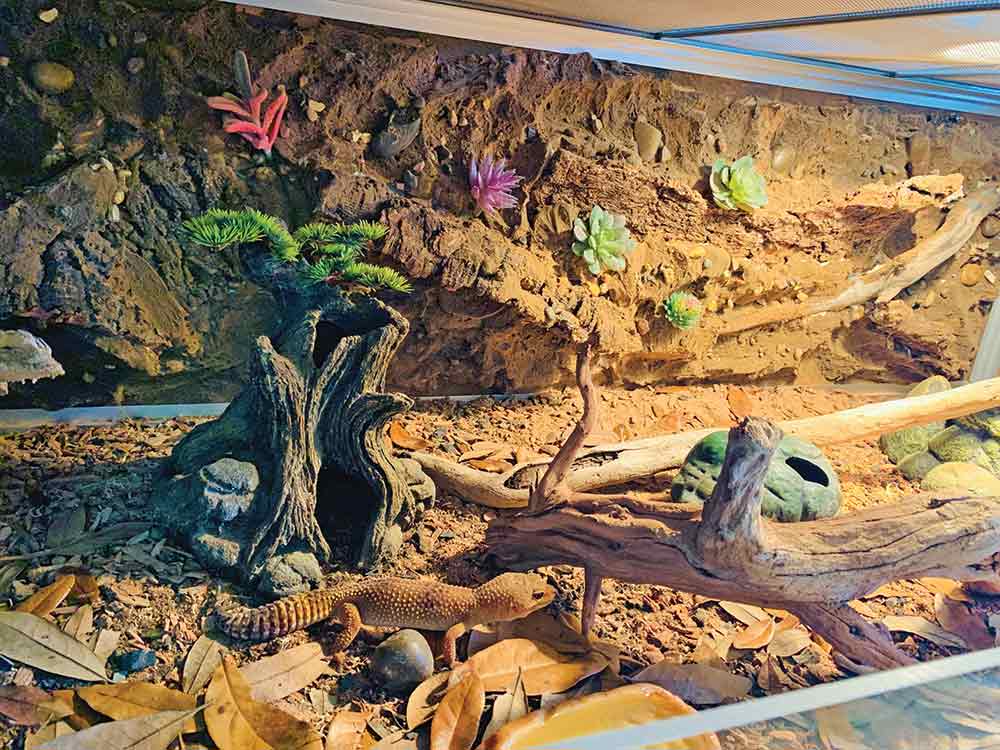 An enriched enclosure design provides plenty of opportunities for reptiles to interact with their environment. Photo courtesy Zen Habitats

Results showed that each group had a distinct behavioral profile, with the enriched snakes more behaviorally adaptive than the snakes kept in clinical enclosures. Snakes kept in enriched conditions demonstrated superior problem-solving abilities and were also less reactive overall in the open field test conditions than their counterparts. 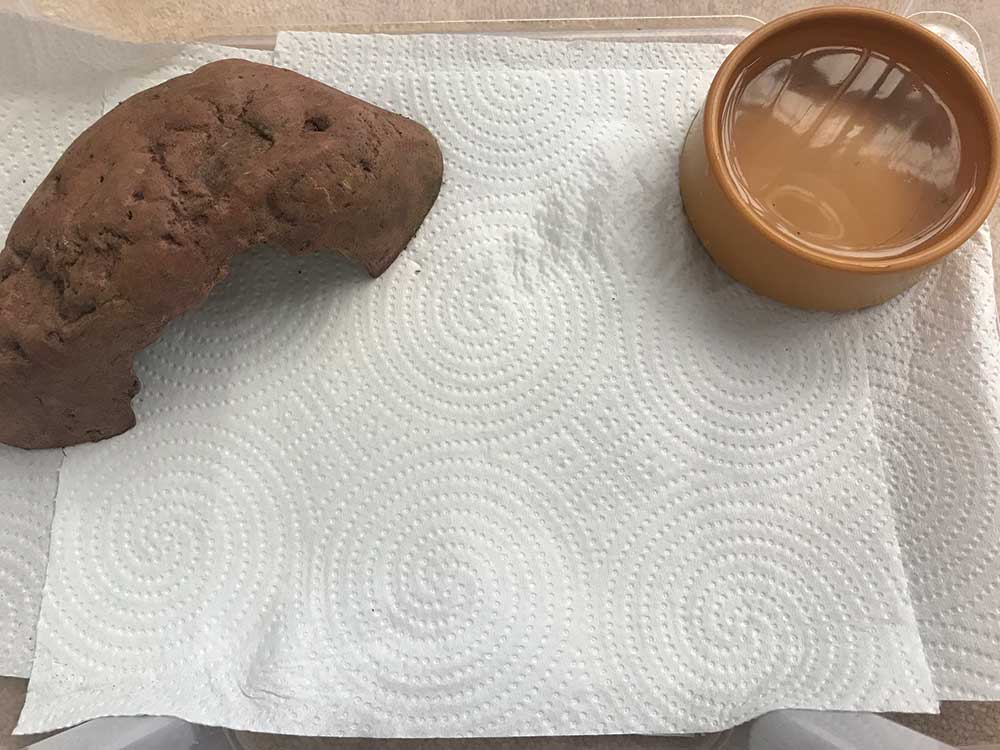 Contrast an enriched enclosure with one with just a few sheets of paper towels, a water bowl and a hide. Photo by India Cullen

Within the problem-solving task, enriched snakes were able to find the goal hole within the maze apparatus quicker than the clinical group, and when tested three times in the open field task, the enriched group demonstrated a habituation trend in the number of tongue flicks per minute, therefore acclimatizing to the novel situation quickly, whereas the clinical group displayed the opposite.

How do Zoos Provide Enrichment for Reptiles?

Peer-reviewed studies on enrichment for reptiles are few and far between. However, during a 2019 study entitled “Evaluation of Enrichment for Reptiles in Zoos,” Taylor Eagan from Tufts University sent out surveys to different zoological institutions across the United States, with 76 responses. The surveys divided enrichment into eight categories: food (use of puzzle feeders, foraging enrichment, and different food varieties), olfactory (application of pheromones, the scents of prey or predators, and introduction of novel scents into the environment), training/behavior modification, natural enrichment devices (use of leaves, branches, rocks, etc.), man-made enrichment devices (toys), social (cohabitation of the same species), structural/habitat design (design of the enclosure to improve the experience of captive reptiles), and other (miscellaneous enrichment not covered by the previous categories). 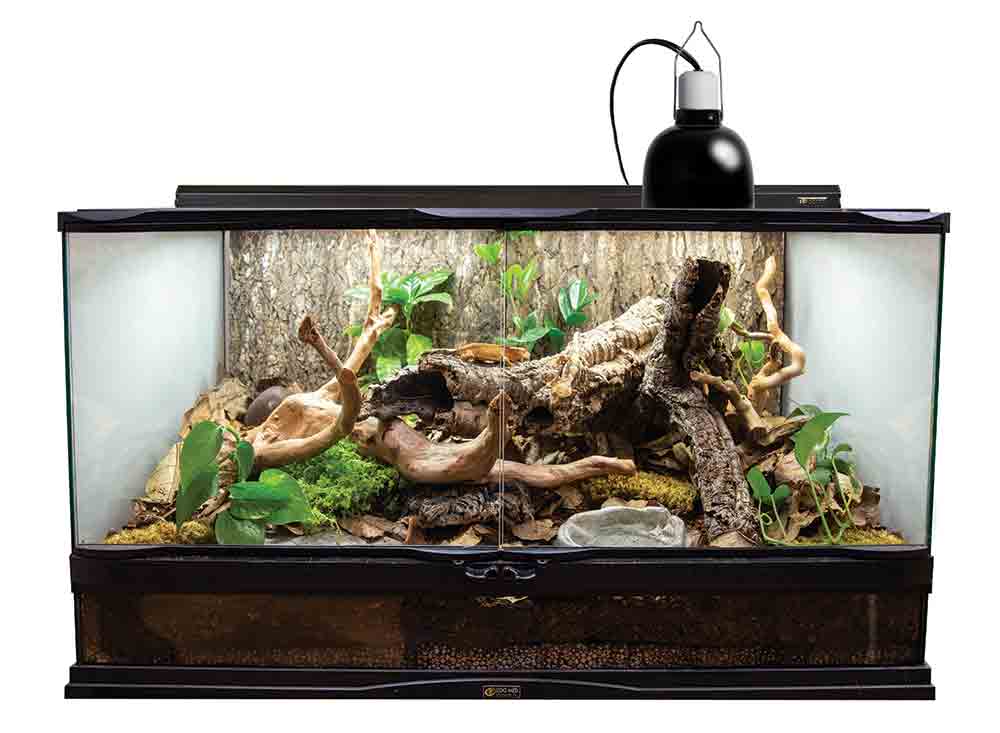 The study noted that from prior research from reptile biologist Clifford Warwick; reptile behavior is largely innate. Therefore, when reptiles are removed from their natural environment without the provision of appropriate stimuli by their keepers, Warwick suggests, that prevents their innate behaviors from being able to function properly, resulting in stress-related behaviors and abnormalities. So-called ‘glass dancing,’ where an individual repeatedly pushes at the glass boundary of the vivarium, anorexia, and tail-dropping are some of the most common stress-related behaviors observed in captive reptiles.

How To Build A Bioactive Enclosure For Your Crested Gecko

The results of Eagan’s study showed that 72 of the 76 respondees admitted to providing enrichment for their reptiles. Two of the most widely used enrichment groups were structural/habitat design and natural enrichment, whereas the use of the other groups differed according to the institution and the range of species kept. Eagen puts forward the suggestion that the usage of natural objects such as rocks and branches to create the structural elements within enclosures explains the high statistics for the use of both structural/habitat design and natural enrichment.

How Does Reptile Enrichment Translate for Hobbyist Keepers?

One of the easiest ways to provide enrichment for your reptiles is to alter their environment. By designing the animal’s enclosure to provide both physical and mental stimulation, captive animals can express natural behaviors that could prevent the formation of stress-related habits such as glass climbing.

One of the simplest ways to enrich the experience of captive reptiles is to rearrange their enclosures frequently, stimulating the inhabitants as they explore the new layout. This is an excellent idea if keepers are on a tight budget. Another lower-budget option is to add a species-appropriate substrate to encourage natural digging and burrowing behaviors. Animals previously kept on flat substrates such as paper, tile, or reptile carpet will relish the opportunity to dig or burrow. Physical enrichment can be provided by incorporating elements that encourage the reptile to move about its enclosure, including textured objects for climbing. In addition to logs and branches used as perches, arboreal animals can use vines and rope to explore. Some reptile species, including the ball python (Python regius), will climb given the opportunity; however, most basic setups are designed to be purely terrestrial. 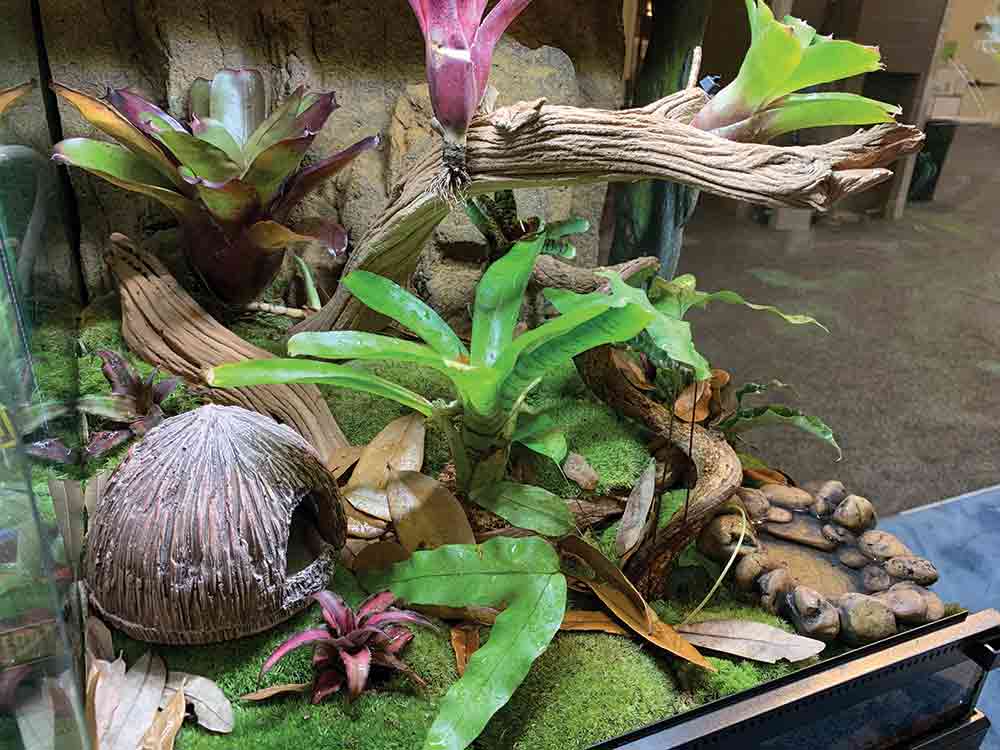 Keepers can also use heat and light gradients to promote movement as the animal thermoregulates. Keepers can fill their space with interesting obstacles for them to navigate as they move from one end of their enclosure to the other. In addition to providing physical enrichment, keepers can give cognitive enrichment by using puzzle feeders or hiding food within different objects to stimulate natural foraging behaviors. Another idea is to use homemade scent trails for additional enrichment at feeding time. Remember to tailor every type of enrichment to the exact species. There is no point investing in climbing opportunities if the species is a Kenyan sand boa (Gongylophis colubrinus)!

Enrichment is an extremely important aspect of reptile welfare that can reduce stress-related behaviors. Evidence shows that snakes kept in enriched conditions show greater problem-solving abilities and display different behavioral patterns to those kept in clinical conditions. Additionally, survey results from zoos reveal that the two most common methods for providing enrichment within zoological institutions is to provide natural enrichment, such as branches and rocks, and to change the structural design of the enclosure to improve the experience of captive reptiles. So with all the benefits of providing stimulation for captive reptiles, keepers should explore their options for keeping their animals both mentally and physically stimulated.

India Cullen is an undergraduate student in the United Kingdom working on a degree in zoology. She has been keeping reptiles for more than 10 years.